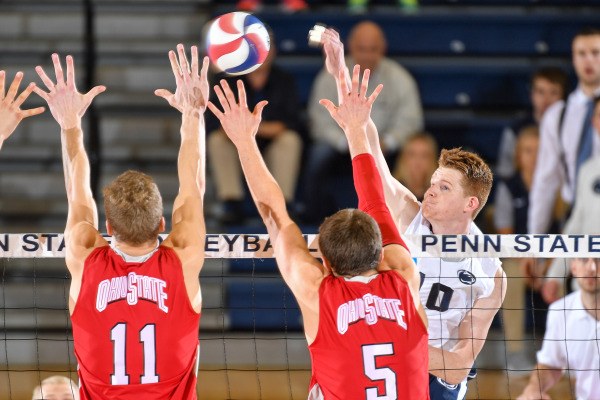 With a three match slate in their midst, Penn State began with then-#1 Ohio State – Chris Nugent began the week off strong for the Nittany Lions and continued that pattern into the following two matches. With his steady performances last week, Nugent earns VolleyMob’s National Player of the Week.

Nugent opened his week with 19 kills on a .515 hitting percentage, gathering eight digs, one service ace and three block assists. It was a Nugent kill that concluded the five set upset over the Buckeyes – lifting the team to their first win over a #1 ranked squad since the 2006 season.

In the squads second match of the week to Princeton, they once again found themselves in a five set battle. Nugent produced 14 kills on a .346 hitting percentage, adding three service aces, a team-best nine digs and four block assists.

The Nittany Lions final match of the week was a four set victory over NJIT – outlasting previous VolleyMob Player of the Week Jabarry Goodridge’s 23 kills. Nugent helped the team to victory with 12 kills on a .407 hitting percentage while contributing six digs and one block assist.

Nugent leads the Nittany Lions on offense with 257 kills on a .322 average hitting percentage – which ranks 29th nationally. The senior puts down an average of 3.34 kills per set – ranking 23rd nationally. Nugent also ranks second on the team with 18 service aces. From the back row, Nugent has accumulated 105 digs on the season and 29 blocks. On average, Nugent puts down 3.79 points per set – 28th nationally – for the Nittany Lions.