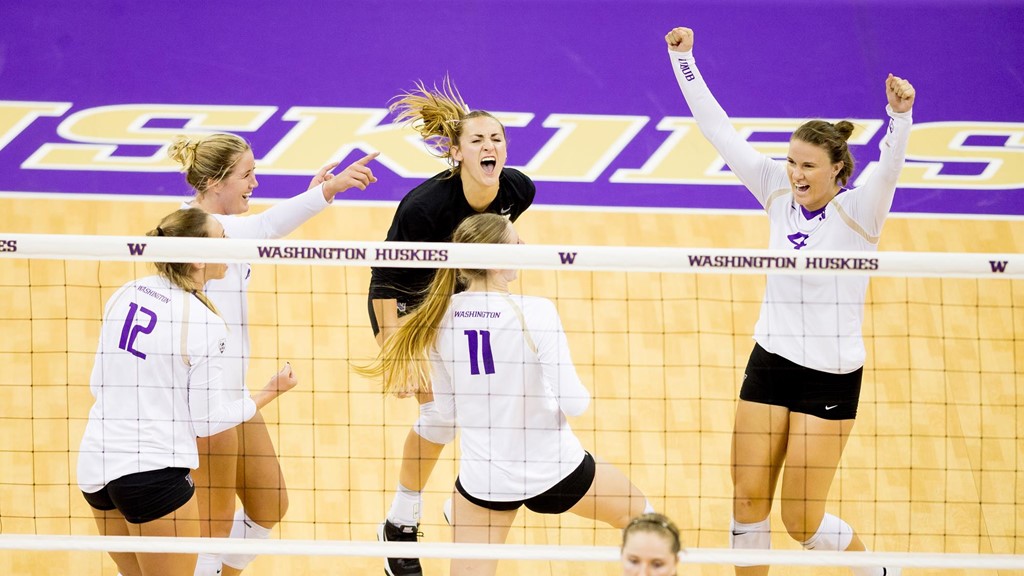 Both teams managed six blocks in the match.

Washington kicked off the match with a 5-0 run and boasted a 10-4 lead soon after as Schwan downed three straight kills. Another 5-0 run, including two Hazelwoo putaways, pushed the edge to 11 at 21-10. Santa Clara responded with five straight points, capitalizing on three UW errors and a Gajdka ace to pull within six. A DeHoog kill put the Huskies on the hill at 24-16. Kantor put down two kills to keep the set going, but Destiny Julye capped the Husky win.

The Huskies got off to another quick start in Set 2, racing ahead 8-4, as Hazelwood put up two blocks and Schwan added an ace. The Broncos caught up at 8-all with help from a kill and an ace by Gajdka. The teams tied 10 more times, last at 20-all, before either gained more than a one-point edge. Washington finally broke through to up 22-20 with a Schwan/Hazelwood block and a Santa Clara miscue. Hazelwood added two more kills to earn their first set point chance at 24-22. DeHoog clinched the win two points later.

Washington cruised to a 10-5 lead in Set 3 with help from three DeHoog kills. Santa Clara turned the tables with an 8-2 run, including six kills, two each by Kantor and Lindberg, to go up 13-12. Down 15-13, UW rallied with nine of the next 12 points to take a three-point lead at 21-18. DeHoog and Hazelwood posted two kills apiece in the rally. Trailing 23-20, Santa Clara scored three of the next four, including two Lindberg putaways to stay in the game. A service error, however, ended the match.

The eighth-ranked Huskies got a good fight from Santa Clara tonight at Alaska Airlines Arena but Washington (3-1) held firm late in sets two and three to come away with a sweep, 25-18, 25-23, 25-23, in front of 1,541 fans. Seniors Courtney Schwan and Carly DeHoog each put down 10 kills while sophomore Shayne McPherson helped the defense with a season-high 12 digs.

“Certainly there was some good execution at times, but overall we’re still a team searching for the right amount of effort and the right level of intensity,” Head Coach Keegan Cook summed things up. “Santa Clara did some good things, we executed at times for stretches of points, but we’re still looking for our identity here.”

DeHoog hit .500 on the night, with her 10 kills on 16 swings with just two errors, continuing a string of impressive early season play for the fifth-year senior.

Senior Bailey Tanner spread the ball around as five Huskies had at least six kills. Tanner had 35 assists, with Marion Hazelwood putting down nine kills on a .353 attack percentage, and Destiny Julye adding eight on a .261 mark followed by six kills for freshman Lauren Sanders who hit .385. Schwan served up three aces to go with her 10 kills.

Sanders and Destiny Julye rejected the Broncos for the first point of the match. A couple Santa Clara errors had the Huskies quickly on top, 4-0. Schwan hit one high hand sand out for her first kill for 5-0 and the Broncos took the early timeout to regroup. The timeout helped SCU score three in a row until serving long for 6-3. Tanner went running for a long bump set to Schwan who used it for a kill for 8-4, then Scambray bumped one a long ways for another Schwan finish on the next point. Carly DeHoog and Julye both picked up their first kills as the Huskies maintained a six-point lead at 13-7. A kill from Marion Hazelwood and a Santa Clara misfire pushed the Husky lead to 19-10 and the Broncos used their final timeout. Schwan posted a stuff to make it 20-10 Dawgs. Santa Clara went on a run late to close the gap to 21-15 and Washington used its first timeout to refocus. Out of the break, a perfect pass from Scambray went to Hazelwood for a quick kill, and Schwan followed that up with an ace to the floor for 23-15. DeHoog slammed one to get to set point at 24-16. The Broncos saved a couple but Julye finished it at 25-18 with a crosscourt kill. Washington rolled to a .458 attack percentage in set one and held Santa Clara to .042. Schwan had four kills and Hazelwood, Julye, and DeHoog had three each.

Schwan rolled one to the floor and Scambray dialed up her first ace to give UW an early 4-1 lead. Hazelwood and Schwan teamed up for a big rejection for a 6-4 edge, and on the next rally, Julye got the most of a roof for another Point Huskies. Schwan then dropped another ace short to the floor for 8-4 and the Broncos took timeout. A couple errors on UW’s part let SCU tie it up at 8, but Julye tipped for a kill and DeHoog and Sanders combined for a block to regain the lead, 10-8. The Broncos inched in front by one but Sanders tied it at 13 with a slide kill. The teams traded sideouts back and forth for a number of points, with heavy swings from Hazelwood and Julye tying the set up each time. Julye went up the sideline to swing the lead to UW, 18-17, but Santa Clara answered to tie it. Sanders put one away in serve-receive to tie it at 20-all. A block from Schwan and Hazelwood and a Broncos error made it 22-20 Dawgs and Santa Clara called time. Hazelwood smashed a slide for 23-21, then hit a quick off the block and down to get to set point at 24-22. On their second chance, DeHoog ended a long rally by finding the back line from the right pin to end it, 25-23.

A Schwan shot into the campfire provided a 4-2 lead early in the third set. DeHoog buried one from the right and then Tanner floated an ace for 6-2. Another big swing from DeHoog extended the lead to 10-5. A 4-0 run from Santa Clara got them right back into it, but Sanders had consecutive kills for 12-9. But another 4-0 run for Santa Clara gave it a one point lead at 12-13. Washington moved back on top, 16-15, on a Schwan kill off the block and a pair of Broncos errors. Dehoog tapped down a ball hanging above the net for 18-17 Dawgs and Santa Clara took time. Perfect placement from Schwan got UW the ace for a 19-17 lead. Jade Finau subbed in and kept a key rally alive with a couple digs and Tanner set DeHoog to end it for 21-18. Julye had a big kill off the block in transition to make it 23-20 and force SCU’s final timeout. The Broncos served long to get the Huskies to match point at 24-22, then served into the net at 24-23 to end the match, 25-23. Washington hit .316 in the final set and pulled it out despite a .378 mark from the Broncos thanks in part to a 2-0 edge in aces.

The Huskies will be back in action tomorrow at noon to take on crosstown rival Seattle U., and then finish the weekend with a 7 p.m. match tomorrow against an undefeated Cal Poly squad.

Santa Clara volleyball recovered from a slow first set to keep pace with No. 8 Washington in the second and third frames at the Washington Invitational Friday night. The Huskies edged the Broncos 25-18, 25-23, 25-23 at Alaska Airlines Arena.Friday’s second set featured 11 ties and the third set featured six ties. The Huskies (3-1) jumped on the Broncos (2-2) early in all three stanzas; they led 5-0 in the first, 8-4 in the second and 7-2 in the third.

Bronco setter Kirsten Mead made it four double-doubles in four matches this season by logging 33 assists and 12 digs. Jensen Cunningham led all players with 11 kills on .444 hitting. Allison Kantor hit .538 and posted a career-high seven kills in her fourth match as a Bronco. Tatiana San Juan tied Mead for the team lead with 12 digs.

Courtney Schwan and Carly DeHoog led the Huskies with 10 kills apiece; DeHoog hit .500 on the night. Bailey Tanner registered a match-high 35 kills and set Washington to a .313 hitting percentage.

Michelle Gajdka’s eight kills in the second set were the most by any player in a single frame for the contest. Santa Clara held six leads in that set and was on top as late as 20-19 before Washington won three straight points on its way to a 2-0 lead at the break.

Trailing 10-5 in the third, the Broncos rattled off a 10-3 run to pull in front 15-13. Kantor and Hailey Lindberg each had two kills over that stretch. Santa Clara committed two service errors for Washington’s final two points.

The Huskies, ranked No. 3 in the AVCA preseason poll, controlled play in the first set and outhit the Broncos .458 to .042. Washington won the first five points of the contest and had four different players tally three kills in the opening frame, including four from Schwan.

• The Broncos faced a 2016 NCAA Tournament participant for the third time in four matches. They defeated American and fell to Howard on opening weekend.

• Taylor Laugero, who led the team with 471 digs as a freshman in 2016, has not taken the court this season.