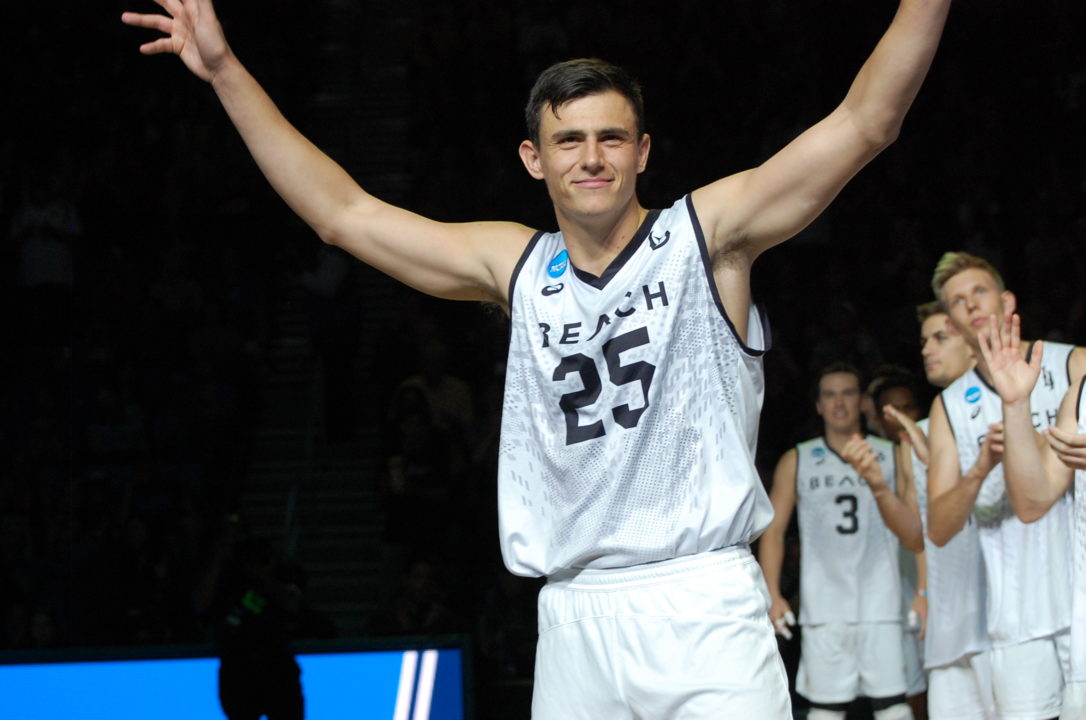 Junior outside hitter Kyle Ensing, LBSU's top hitter on the night, put the win in perspective. "Looking back on our last two years, losing in the semifinals, that’s always in the back of our minds and going into the match we always had that in the back of our mind. We really pushed ourselves a lot this match and we came out on top and it means the world.” Current Photo via Anne Lepesant

It was a historic night in Pauley Pavilion as No. 1 seed Long Beach State claimed its first NCAA men’s volleyball title since 1991, ending a 27-year drought with a five-set win over home-standing UCLA.

Members of the 1991 squad were in attendance to support the 49ers as well as their former teammate Alan Knipe, who is in his 15th year at the helm of his alma mater.

Long Beach State won the opening set, but fell behind 2-1 in the match before rallying to sew up the national title with 26-24 and 15-11 victories.

In addition to Knipe, junior outside hitters Kyle Ensing and TJ DeFalco and junior setter Josh Tuaniga spoke with the media after the historic win, the 49ers third over the Bruins this season.

“What can you say about that game?” Knipe said. “It doesn’t surprise me that that’s the battle we had with them. I know that we won both times earlier in the season in four [sets], but that is a really good team. They moved some pieces around and found a better lineup, at least for production. They were prepared and played well. They created a lot of pressure from the end lines, so it’s a credit to them. And congratulations to all four teams that were here at the Final Four, because the volleyball was amazing.

“So, what it means for us – Kevin and Paul from TV
were asking me, ‘Does this vindicate or anything from the last couple of years?’ And yeah, I guess it gives me a perfect platform to answer that question now. It’s not vindicating – it’s a process. Instead of a lot of praise to these three guys, especially, who are sitting up here that went to the Final Four as freshmen and sophomores, and now won it as juniors, it’s part of a process. It’s growth. It’s development. It’s maturity. They deserve it.
They played hard and trained hard. They committed to a process with their teammates. We had four new pieces this year besides these three and still found a way to do a good job in all areas of the game and actually do a better job. I’m very proud of our guys, of not putting their head down after some failure. It’s just with any
other life lesson. You get some failure and what are you going to do with it? Our guys decided to have some determination and do something about it. They trained like that every single day from the fall all the way through, winning the first-ever Big West Conference regular-season championship [and] the Big West Conference Tournament and into the NCAA Tournament and winning the national championship. That’s growth and I’m super proud. That was a gritty, gritty performance tonight, as was the one on Thursday night.

“I could not be more proud or happy for our guys and for the entire Long Beach nation that came out tonight, whether they were former players or administrators, our president, our mayor – everybody that was here. All the fans and our parents, that was packed into this place. I don’t know if it felt like the Pyramid, but it certainly
did not feel like an away match.

Ensing downed 20 kills and added four aces and four blocks to lead the 49ers, while DeFalco tacked on 18 kills, 12 digs and four stuffs. Tuaniga guided the team to a .325 hitting percentage in the match, dishing out 46 assists and chipping in three kills of his own.

Ensing said that victory was sweeter in the light of past disappointment.

“It means the world to us,” the outside hitter said. “Looking back on our last two years, losing in the semifinals, that’s always in the back
of our minds and going into the match we always had that in the back of our mind. We really pushed ourselves a lot this match and we came out on top and it means the world.”