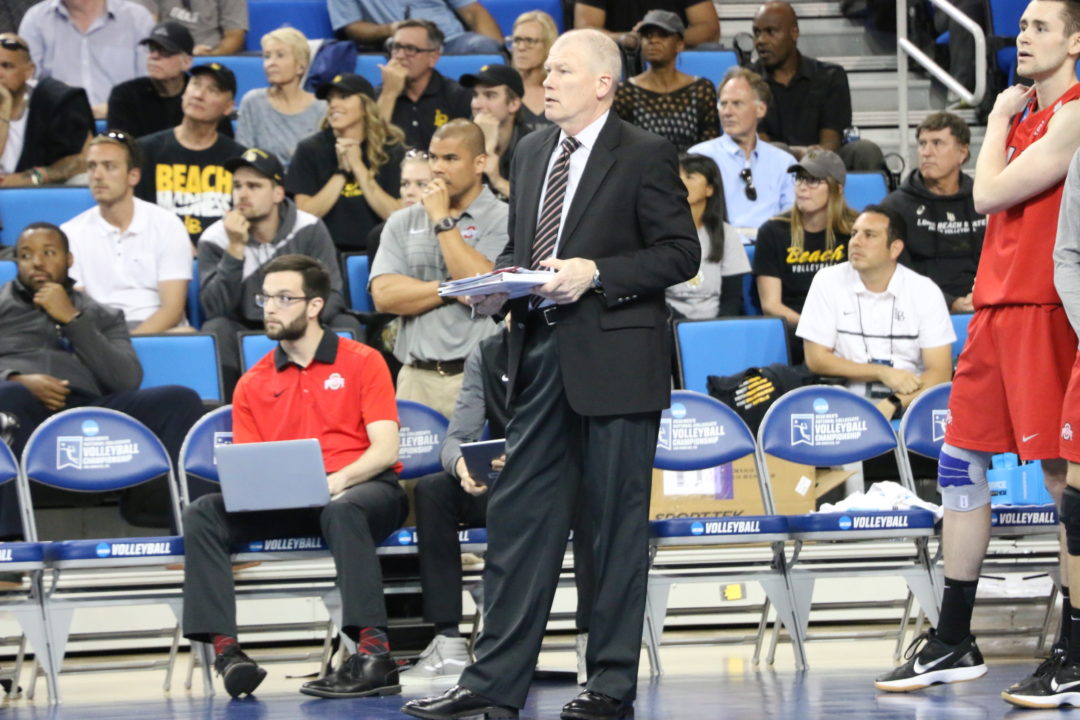 Ohio State head coach Pete Hanson focused on his team's growth, rather than the defeat, after Thursday's semi-final. Current Photo via Anne Lepesant

Ohio State head coach Pete Hanson says that he doesn’t think fatigue from having to play a quarterfinal match on Tuesday contributed to his team’s 3-1 loss to Long Beach State in Thursday’s semi-finals.

“I don’t believe it did, quite frankly. I thought our guys were as physically good in set number four as they were in set number one. In set number one, it’s all about nerves. Set number two was, you know, we had a lead, and we kind of let it slip away with some not great disciplined plays. Set three, we got the lead and ran it out. And then in set four, I thought we were playing good volleyball. We just had a couple of misfires at an inopportune time, and a veteran team like that takes advantage of it. It wasn’t for lack of conditioning or the fact that we had played on Tuesday.”

Most of Hanson’s post-match comments focused not on the team coming up short of a third-straight national championship; rather, he was focused on the growth that the team had as a young group, highlighting the return of junior Aaron Samarin from shoulder surgery last season.

“Take this young man who is sitting to my left [junior Aaron Samarin] who medically redshirted last year. He had surgery on his shoulder. He did not practice a minute last year. He came back and trained and he rehabbed, and he came back with the idea that he wanted to be our starting libero. He has put in time with the program, and he earned the spot. You know, he got better every day. I fully believe that today was the best match that he’d played all season long in the biggest circumstances, with the most pressure. That is something that you don’t know is going to happen back in January, but you keep putting him out there and keep patting him on the back, telling him ‘Aaron, we believe in you and we know that you can do it.’ He did it.

“The young man, Sanil Thomas, who watched Christy Blough run the offense for two years and then steps on the court and has to set guys and kind of carry on that tradition. The growth, the maturity and the ability for those guys to deal with what has been about Ohio State volleyball for the last couple of years and then you throw in Jake Hanes, who is one of the biggest guys in the gym and has some of the biggest expectations, and yeah, he didn’t have a great January. He had a little bit better February and then a little bit better March, and then he figured it out in April, and then here we are in May. He looks like a fairly decent college volleyball player. So,
it’s been a gradual process. Every day you have to remind him that, yeah, you want to make good plays and put in a great effort and the other team is going to try and stop you. And they’ll win a few of those battles, but at the end of the day, you’ve got to just keep working at it. He’s doing that. I’m really proud of those guys.

“And then I’m really proud of Nick Szerszen, who gave of himself to help these guys and to keep supporting and encouraging them. He believed in them. That says a lot when you’ve got a three-time All-American who continues to slap you on the back and say, ‘You guys belong out here and I need you to help me, and I’ll help you.’ That’s what a good team is all about.”