Wisconsin the Most Picked 2nd Round Upset; Examining the VolleyMob Bracket Challenge

Wisconsin is the most popular first/second round pod bracket buster while Penn State is the people's National Champion; Examining the VolleyMob Bracket Challenge. Archive Photo via Wisconsin Athletics

The NCAA Tournament is underway with four matches occurring yesterday and 30 more on today’s slate. Also in the swing of things is the VolleyMob Bracket Challenge (where you can see updated standings here). With 116 brackets worth of data, let’s examine what the people had to say about any potential upsets and who will bring home the trophy in a few weeks.

There weren’t a ton of predicted first round upsets in terms of the seeds losing, while matches between the 2/3 seeds in each region were pretty split. Let’s fast forward to the second round though. The people and the bracket challenge spoke as three non-seeded teams are actually more often picked to win their first/second round pod.

The most often non-seeded choice picked to make it past the second round, and likely a ranked team was the Wisconsin Badgers. In total, 70 of 116 brackets chose the Badgers as they appear to be this year’s sleeping giant. The breakdown of that pod’s winner from the bracket challenge can be seen below: 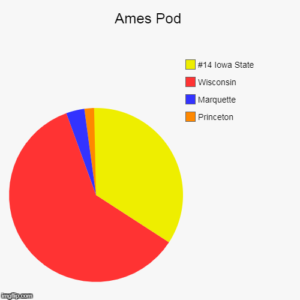 The second-most picked team that wasn’t seeded was the Kansas Jayhawks. Another pick that makes some sense in terms of an upset because they were on the border of being seeded, have shown past success and are in a pod with a lower-seeded team. Still, it was a bit surprising that 68 voters chose Kansas compared to just 42 for host-Wichita State. 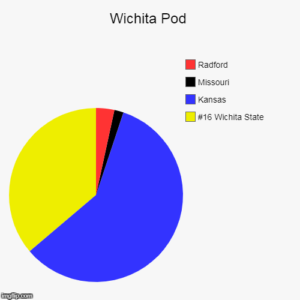 The only other unseeded team picked by the bracket challenge participators was Michigan State. In what might be the most difficult first/second round pod, three VolleyMob Top 25 ranked teams are competing for one spot in the Sweet 16. It’s tight between Michigan State and Creighton, but the Spartans received 57 votes to Creighton’s 51. 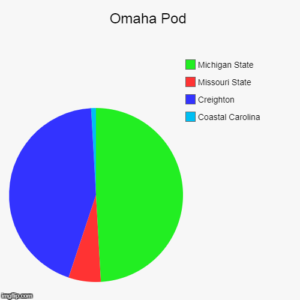 The next closest upset pick was Purdue to upend Utah, but the Utes held 58 picks to the Boilermakers’ 51. USC, UCLA and Baylor follow after that – although all three had over 40 votes more than the two-seed in their pod.

It’s not necessarily surprising that #5 Nebraska was the top pick in the Lexington regional, but what is surprising is that the Cornhuskers had the second most picks to go to the Final Four even though they are playing in a regional with a higher seed. Also of note, BYU was the ninth highest pick of Final Four teams in the bracket challenge.

The other two regions were plenty closer, as the tightest was between #3 Stanford and #6 Texas. That was the National Championship match last year, so it’s easy to see why both teams have plenty of support. In total, Stanford is the fourth highest Final Four picked team while Texas is fifth, but the Cardinal still edge them out as the most popular in the region.

Rounding out the four regions is the Gainesville bracket where Florida got the most votes but had Minnesota taking a chunk of the votes. The Gators finish third in Final Four picks while the Golden Gophers are sixth for the VolleyMob Bracket Challenge. UCLA was also 10th in Final Four picks even though they are the #15 seed in the tournament.

As we go a few matches further, Penn State continues to be the favorite. That isn’t much of a surprise as they are the top seed after all, but what is interesting is Stanford is the second-most picked title team. That contrasts a tad with the fact that they had the fourth most Final Four votes, so it seems for voters that think they can overcome their regional (and possibly Texas), that they have a great shot from there.

Once again Wisconsin shows up as a sleeper pick in this regard as they got the most National Championship votes for an unseeded team, tying them with #9 Creighton who could also be a Cinderella story. Amazingly, #4 Kentucky is just in ninth and tied with two other unseeded teams that could be bracket busters in Kansas and Colorado State.

All of the National Championship picks for the 116 players of the VolleyMob Bracket Challenge can be seen below: