With Newborn Baby Lara At Her Side, Dani Lins Joins Brazil’s NT 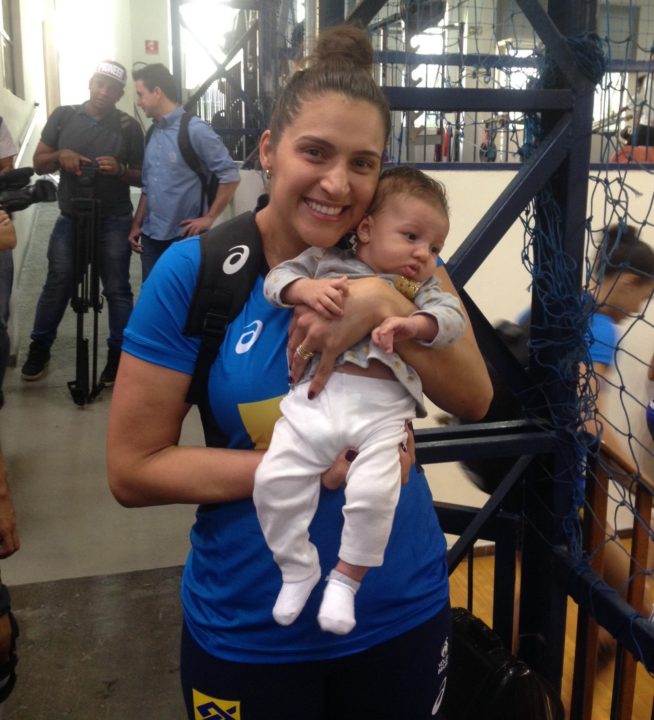 While many other setters have tried to step up on Dani's absence, it's hard to see Guimarães moving away from his trusted soldier of so many years.  Current Photo via Divulgação/CBV)

Olympic gold medalist and starting setter for Brazil in its last two Olympic Games, Dani Lins found a fun solution to return to the courts while on the first stages of motherhood: take her baby with her to practice. The decision has made training sessions in Barueri, where Brazil’s national team is hosted, fun and lovable for all of the team’s athletes and staff. As can be seen in the player’s official Instagram Stories page, everyone is always trying to get some time with Baby Lara to hold and pamper the team’s youngest newcomer. Dani’s decision also has a practical and healthy aspect to it, as having Lana around at all times makes it easier for her to breastfeed the baby.

Here is what she and coach José Roberto Guimarães said of her return (Globo.com):

“It’s very nice to be with all these girls once again. As for the World Championships, that is my goal, I want to be physically and technically ready to play this competition. I have to think about this preparatory period step by step, but I am very confident. Besides, being here with my daughter is incredible, I am very happy.”

“Dani is training very well at this moment. She is still breastfeeding, so we have to be careful with her. We still have a long time until the World Championship. She is a player that always took care of herself, with a disciplined lifestyle. I believe she will be ready.”

While many other setters have tried to step up on Dani’s absence, it’s hard to see Guimarães moving away from his trusted soldier of so many years. He has already signed her for his domestic team, and she will probably be the starting setter of the rest of this current Olympic cycle.