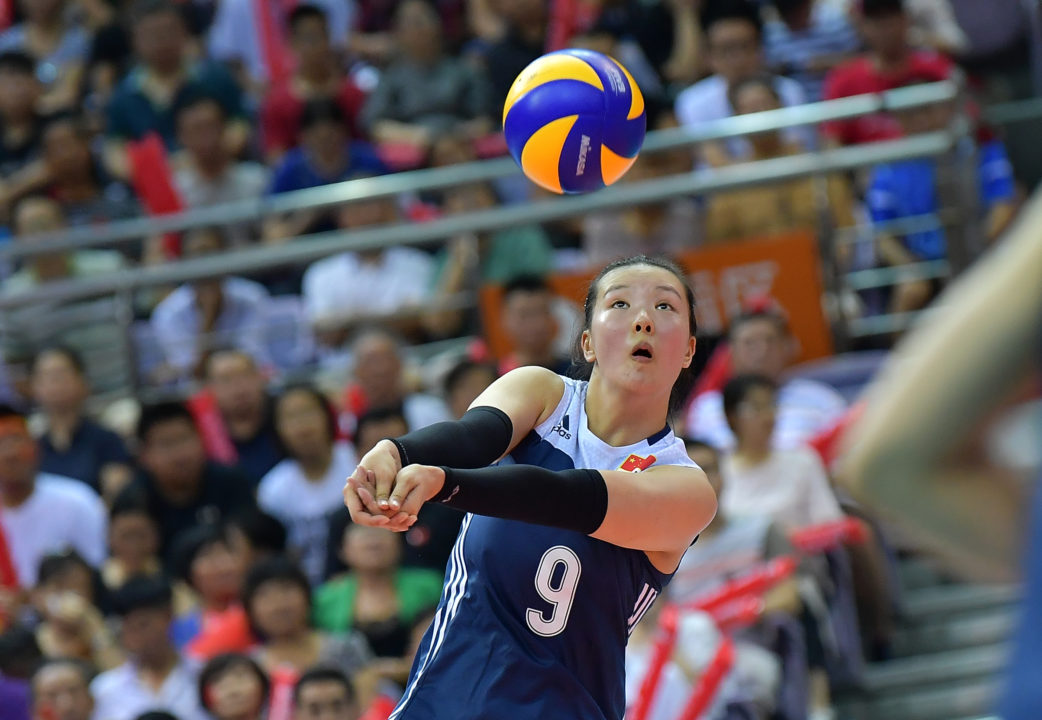 Zhang has returned to her provincial team in Jiangsu to prepare for the World Championships instead. Archive Photo via FIVB

Just two days before the start of the women’s volleyball competition at the 2018 Asian Games in Jakarta, Indonesia, 23-year old Zhang Changning has been sent home to Nanjing to prepare for the World Championships instead. The 23-year old suffered the knee in a collision with Olympic MVP Zhu Ting in training on August 4th.

In the aftermath of the injury, Zhang was treated and felt ready to play, but as the team arrived in Beijing for an air departure to Jakarata, Zhang was sent via train back to Nanjing to continue rehabbing the knee and preparing for the World Championships which run from September 29th to October 20th in Japan. She returned to training with her provincial team Jiangsu in what seems to be primarily conditioning work.

Before being told to return home, Zhang told Chinese media that “I have not felt any pain and I started to do some moderate exercises.”

Zhang, a member of the 2016 Olympic Team, has been battling a run of injuries that included undergoing ankle surgery and missing the entirety of the Nations League tournament. The 1.95m (6’5″) hitter is one of the world’s elite leapers in women’s volleyball, with a listed spike height of 320cm (12’6″). She’s also known as a heavy-hitter, and when rolling is a crucial piece of the Chinese offense alongside Zhu at outside hitter.

In spite of the injury, Zhang emerged from China’s two-week training in Ningbo having dropped 7 pounds as part of a Chinese effort to improve overall team fitness.

Depth continues to be a problem for China, as it was throughout the Nations League. The emergence of 18-year old Li Yingying at either opposite or outside hitter helps, but Zhang’s departure costs the team both experience and stability at the OH2 position.

China won gold at the 2016 Olympic Games, but have been up-and-down since then. They won the 2017 World Grand Champions Cup, but were just 4th at the 2017 FIVB World Grand Prix, the same position at the 2017 Asian Championships, and were 3rd at the 2018 Nations League tournament.

China plays in Pool B of the Asian Games and will begin competition on Sunday against Vietnam. China finished 2nd at the 2014 Asian Games, behind hosts South Korea, which broke streak of 4-straight titles.