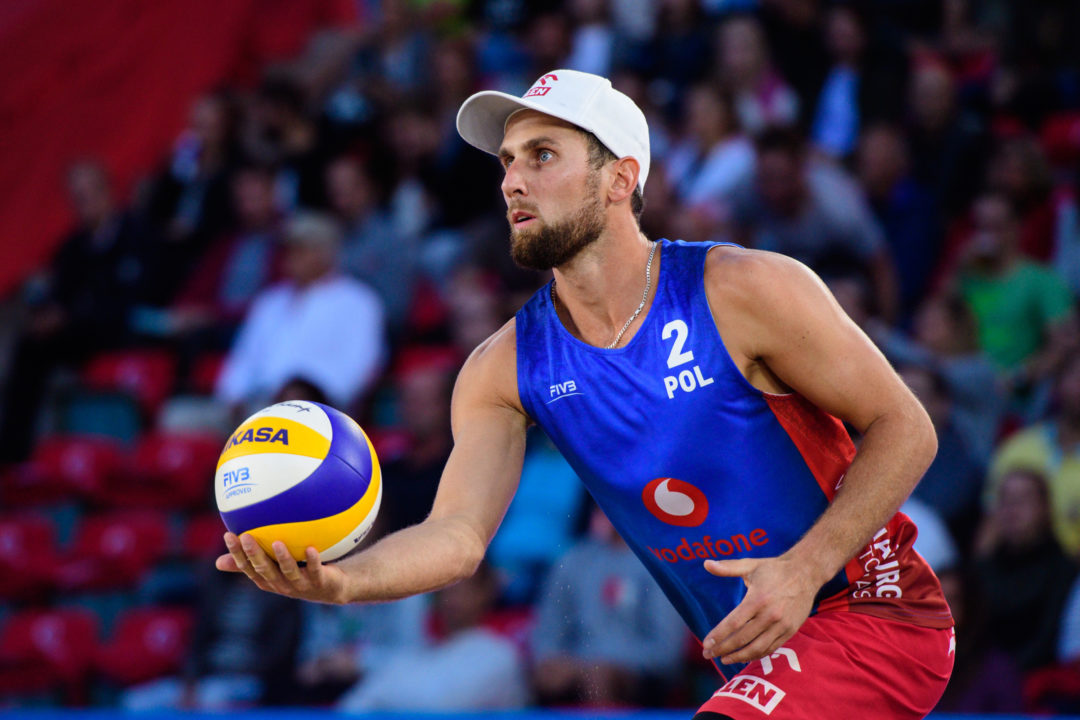 The final four is set for the men's FIVB World Tour Finals after pool play concluded and two quarterfinal matches were contested on Friday. Two teams from Poland, one from Germany and one from Norway will vie for podium positions. Current Photo via FIVB

The final four is set for the men’s FIVB World Tour Finals after pool play concluded and two quarterfinal matches were contested on Friday.

Top seeded Germans Julius Thole/Clemens Wickler and No. 9 Michal Bryl/Grzegorz Fijalek of Poland had to play their way in through the quarterfinals. All four teams are guaranteed a minimum paycheck of $35,000.

Mol/Sorum’s win streak ended at 22 matches, with a tiebreak loss to No. 3 Alexander Brouwer/Robert Meeuwsen on Friday morning (17-21, 25-23, 15-13), but it was not enough to keep the pair from winning Pool B and earning a spot in the semifinals of the FIVB World Tour Finals.

“We heard them saying that they would end our winning streak and we promised it wouldn’t be easy, as it wasn’t,” Mol said. “We could have won the second set as well, so it was a really close battle. Losing always stinks, but they were better.”

The win, which moved Brouwer/Meeuwsen to 2-2 on the week, was not enough to push them into the top three in Pool B, eliminating them from contention.

Bryl/Fijalek held on for a tiebreak win over No. 7 Latvians Martins Plavins/Edgars Tocs (21-19, 17-21, 15-9) to claim second place in Pool B, while Plavins/Tocs finished third. Both teams moved on to the quarterfinals.

Kantor/Losiak also grabbed a guaranteed spot in the semifinals, bouncing back from a Thursday tiebreak loss with a sweep of Thole/Wickler (21-15, 21-15).  Thole/Doppler finish second in the pool, also at 3-1.

Tenth-seeded Russians Oleg Stoyanovskiy/Igor Velichko went the distance for their second win of the tournament, outlasting Italy’s Paolo Nicolai/Daniele Lupo 21-18-16-21, 20-18. Despite the loss, it was the Italians that claimed the final spot in the quarterfinals out of Pool A.

In the quarterfinals, Bryl/Fijalek swept Nicolai/Lupo 21-18, 21-18, meaning there will be a whole new crop of medalists in 2018. Nicolai/Lupo won the bronze at the 2017 FIVB World Tour Finals.

Grzegorz Fijalek and Michal Bryl down #Olympic silver medalist Lupo/Nicolai in front of a frenetic crowd to save a spot in the #WTFinals semis! @PolskaSiatkowka pic.twitter.com/kvX362FWQG

It will be an all-Polish semifinal to start the day on Saturday as Kantor/Losiak will battle Bryl/Fijalek for a championship match berth on Saturday morning.

“We know each other very well, we practice a lot of times together,” Fijalek said. “We’ve never won against them, but I hope this is our time and we play much better than before. A lot of Polish fans wrote me messages that they will come because it is the weekend and I hope they will choose both teams. We are good friends but for sure we will fight, a friendly fight.”

Mol/Sorum will take on Thole/Wickler in the other semifinal. The bronze medal and gold medal matches will round out the men’s competition on Saturday evening.