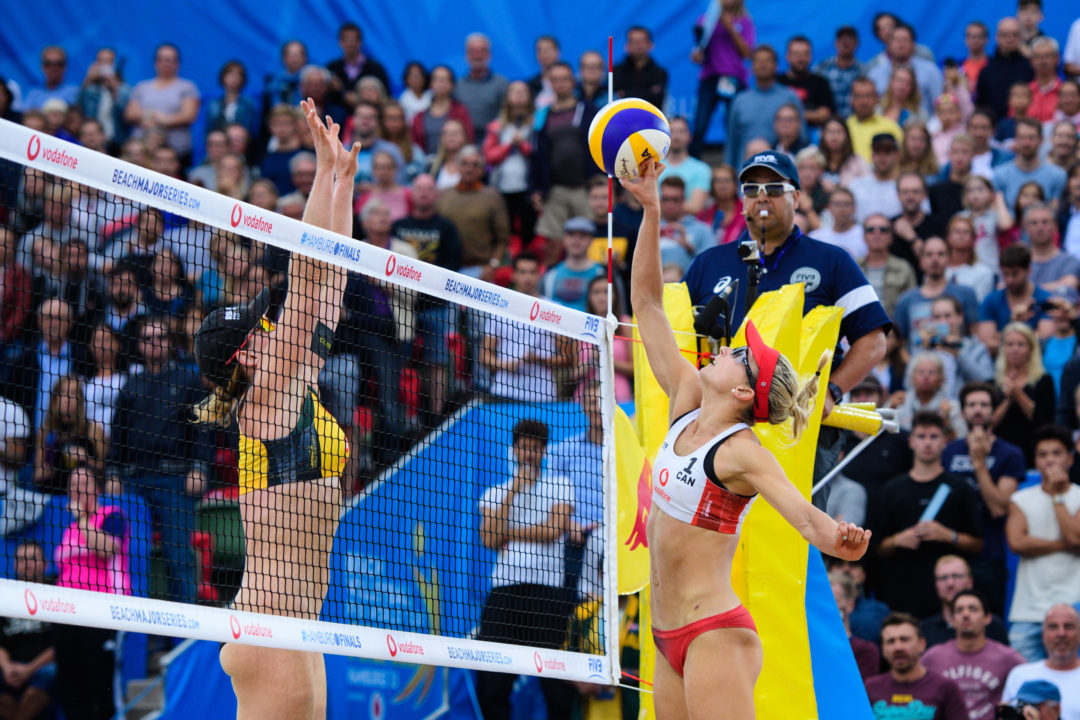 With just four matches left in women's pool play action, there is still a lot to be decided. Only one team has separated itself thus far with Canada's Heather Bansley/Brandie Wilkerson guaranteed at least a spot in the quarterfinals at 3-1. Current Photo via FIVB

With just four matches left in women’s pool play action, there is still a lot to be decided. Only one team has separated itself thus far with Canada’s Heather Bansley/Brandie Wilkerson guaranteed at least a spot in the quarterfinals at 3-1.

Two teams are right on the Canadians’ heels in Pool A, while it is currently a three-way tie atop Pool B at 2-1, with a fourth team standing at 2-2.

After Day 3 of women’s pool play, fifth-seeded Bansley/Wilkerson sit atop Pool A at 3-1. Brazil’s Maria Antonelli/Carol Solberg Salgado and Germany’s Chantal Laboureur/Julia Sude are 2-1, while Americans Summer Ross/Sara Hughes are 1-2, but still have a chance to get into the quarterfinals, depending on Saturday’s results.

Dutch duo Sanne Keizer/Madelein Meppelink, who won the European Championship a few weeks ago, were eliminated from contention at 0-3.

“It’s not a comfortable place to be because ideally we want to win (the pool) undisputed and we’ll have to see what happens and we’re ready for anything either way,” Wilkerson said. “If we must play, we’ll find the good in that. It’s just playing sharper. It’s the end of the season so nothing crazy (in adjustments). We’ve just got to be at our highest level all the time. That’s what it’s going to take to win a game at this tournament.”

The sixth-seeded Canadians swept No. 2 Hermannova/Slukova 21-17, 21-19 and Germany’s Victoria Bieneck/Isabel Schneider 21-19, 21-17 to remain in the race at least temporarily.

“It feels great to put two really good games back-to-back together against two strong teams and just to play at a level we can play at that had been missing a bit,” Humana-Paredes said. “We got the two must-wins that we did and now it’s out of our hands and hopefully the volleyball gods are on our side and we can make it out of our pool. Regardless of what happens, I’m proud of our team and what we were able to overcome and come out on top. It’s a bittersweet ending if it is an ending to our season. It means a lot we finished on a high note playing well the way we can.”

Bieneck/Schneider fell to 0-3 and will not advance in the competition despite their final result on Saturday morning.

There are still four matches left to play:

Ties in the standings are broken first by rally point ratio (points scored divided by points allowed) followed by head-to-head results between tied teams in the point ratio is tied. 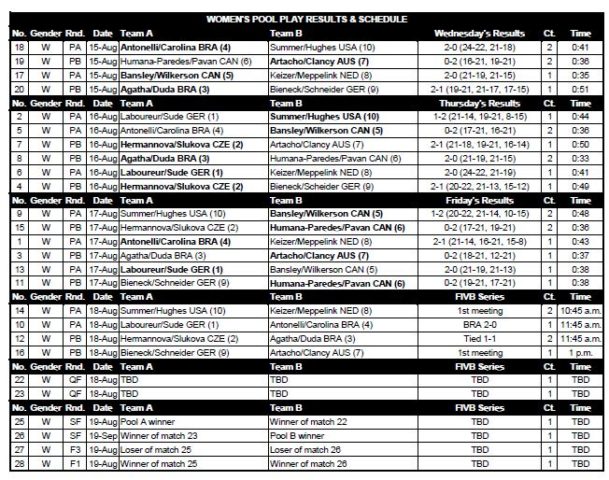 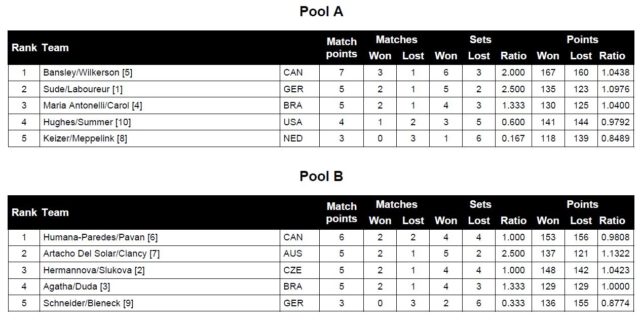