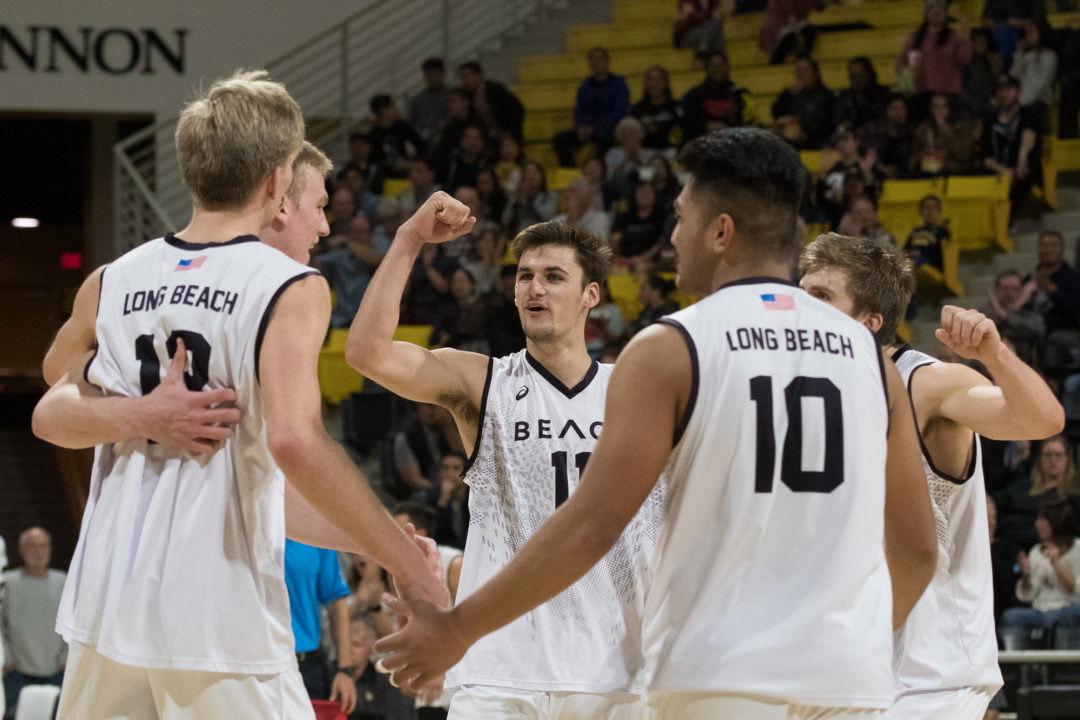 Double-doubles from DeFalco and Ensing were only part of the impressive victory over Hawaii. Archive Photo via LBSU Athletics

HONOLULU – The Long Beach State University 49er traveled to Honolulu, Hawaii to take on the Hawaii Rainbow Warriors Friday night, and the 49ers barely managed to pull off the five set win. Long Beach remains undefeated at 24-0 after winning the fifth set 22-20 in front of an opposing crowd of nearly 5000.

Leading the Long Beach State offense was junior outside hitter, TJ DeFalco, with 22 kills on a .259 clip. He added 12 digs for a double-double on the night. Kyle Ensing also had a double-double with 16 kills on a .255 hitting percentage and 12 digs. Setter Josh Tuaniga ran the offense with 49 assists and added 4 digs and a career-high six blocks.

Hawaii was led in kills by Rado Parapunov (.300) and Stijn van Tilburg (.220) with 20 kills a piece. Van Tilburg managed a double-double, adding 11 digs on the match. Dalton Sobrig also had a double-figure offensive performance with 12 kills and two errors, hitting .500. Setter, Joe Worsley, led the team in assists (54) and digs (12).

The two teams will face each other again on Saturday night in the Stan Sheriff Center at 7 p.m. HT.

With the win, Long Beach State improved to a perfect 24-0 on the year and 9-0 in Big West Conference action. Meanwhile, Hawaii dropped to 17-7 overall and 5-4 in league play.

The conference foes played each other tough and battled it out to the very end. However, Long Beach State managed to outlast Hawaii with a thrilling 22-20 victory in the fifth set to clinch the victory.

The Beach hit .464 in the fifth set knocking down 15 kills on 28 swings and committed just two attack errors, while the Rainbow Warriors hit .231 (11-5-26). The final frame saw the two teams grind it out through 11 ties and four lead changes, before LBSU earned the win on a double block by Nick Amado and Josh Tuaniga.

The duo of Kyle Ensing and TJ DeFalco led the Beach as each registered a double-double. Ensing tallied 16 kills and a season-high 12 digs, while DeFalco led all scorers with 22 kills and a season-high 13 digs. Ensing has now recorded eight double-doubles in his career, while DeFalco has notched 12. The 20-kill contest was the 15th of DeFalco’s career and third this season.

Dishing out 49 assists on the night to keep the Beach offense running was junior setter Josh Tuaniga. He also contributed a career-high six blocks, four digs and three kills.

Joining Ensing and Tuaniga with a new career-high was junior libero Jordan Molina who tallied 15 digs in the contest.

The Beach came out firing right out of the gate as they opened the match on a 4-0 run. The first set was all Long Beach State as the Beach led throughout the set and used a 7-0 run to break the frame open (19-8). LBSU went on to cruise to a 25-16 victory.

Hawaii countered in the second set, kicking off the frame with three straight points. The `Bows went on a 6-0 run to take an 8-3 lead over LBSU as the Beach called a timeout to regroup. Following the break in action, Long Beach State cut Hawaii’s lead to three (10-7), but fell behind again when the `Bows went on a 5-0 run to go up 22-13 before winning the set, 25-17. That was the first time all season Long Beach State was held to under 20 points in a set.

LBSU battled back in the third set as the Beach posted three straight points to break a 3-3 tie and take a 6-3 edge. However, UH would tie the set a 12-all and Long Beach would be forced to rally. The Beach knocked down five straight points highlighted by back-to-back aces from Honolulu native Siegfried to take a 17-12 lead. Still, Hawaii managed to come back and even the score at 24-all before the Beach claimed the third set, 26-24.

The battle continued into the fourth set as Long Beach State jumped out in front 7-4, only to have Hawaii chip away at their lead and even the score at 12-12. From there, the two teams stayed close and found themselves deadlocked at 23-23 after a 6-1 LBSU run. However, Hawaii would come out on top 27-25, and force a fifth and deciding set.

The fifth and final set of the match was a nail-biter to say the least. With both teams fighting for the win, Long Beach State showed its grit and determination as the Beach outlasted Hawaii after battling through several match points before defeating the `Bows on their home court by a score of 22-20.

Long Beach State and Hawaii will be back at it on Saturday, April 14 at 7 p.m. (10 p.m. PT) at the Stan Sheriff Center to close out the regular season.

HONOLULU – The sixth-ranked University of Hawai’i men’s volleyball team gave it all they had before falling in five sets to top-ranked Long Beach State, Friday, in the first of two Big West Conference matches at the Stan Sheriff Center. Set scores were 25-16, 17-25, 26-24, 25-27, 22-20 in a match that lasted three hours and 13 minutes.

The Rainbow Warriors (17-7, 5-4 BWC) dropped into a tie for second place with UC Irvine in the Big West Conference standings heading into the final day of the regular season. The teams play again on Saturday at 7:00 p.m., and following the match libero Larry Tuiletaand defensive specialist Mamane Namahoe will be honored during the traditional “Senior Night” Ceremony.

The Beach (24-0, 9-0), who have already locked up the No. 1 seed in next week’s Big West Tournament, won for the sixth consecutive time in the series.

In a match-up of the nation’s top two offenses, LBSU was held to .250 hitting while UH hit .237. The Beach’s TJ DeFalco led all attackers with 22 kills along with 13 digs and four blocks while the Warriors were paced by outside hitter Stijn van Tilburg (20 kills, 11 digs, 4 blocks) and opposite Rado Parapunov (20 kills, 4 blocks).

The Beach tallied 14.5 blocks and eight service aces while UH posted 12.5 blocks and six aces. LBSU’s Kyle Ensing (5) and Ethan Siegfriend (3) combined for all of the team’s aces. Hawai’i’s Dalton Solbrig recorded a career-high 12 kills along with seven blocks.

With the match tied at 2-2, the race to 15 fifth set featured 11 ties and four lead changes and an electric Stan Sheriff Center crowd. UH had two match points at 14-12 but the Beach erased both. LBSU stuffed two more match points while the Warriors extended the match four times. However, on the 49ers’ fifth match point, van Tilburg was blocked with Josh Tuaniga and Nick Amado.

LBSU cruised to a 25-16 victory in Set 1 but Hawai’i answered right back with a 25-17 win of its own to hand the Beach their worst set loss of the season. The Beach looked to put away the Warriors in Set 3, leading 24-20 before UH erased four set points, including Solbrig’s stuff block on DeFalco to tie the score at 24. But the Beach finished off the set with a kill by Amado and a Parapunov hitting error.

In Set 4, UH scored five straight points for a 15-12 lead. A 5-1 run gave Hawai’i a 22-17 lead. But LBSU answered back with four straight to tie it at 23. The teams traded side-outs with the Beach erasing two set points before the Warriors closed out the frame with back-to-back blocks on DeFalco to send the match to a fifth set, UH’s first of the season.