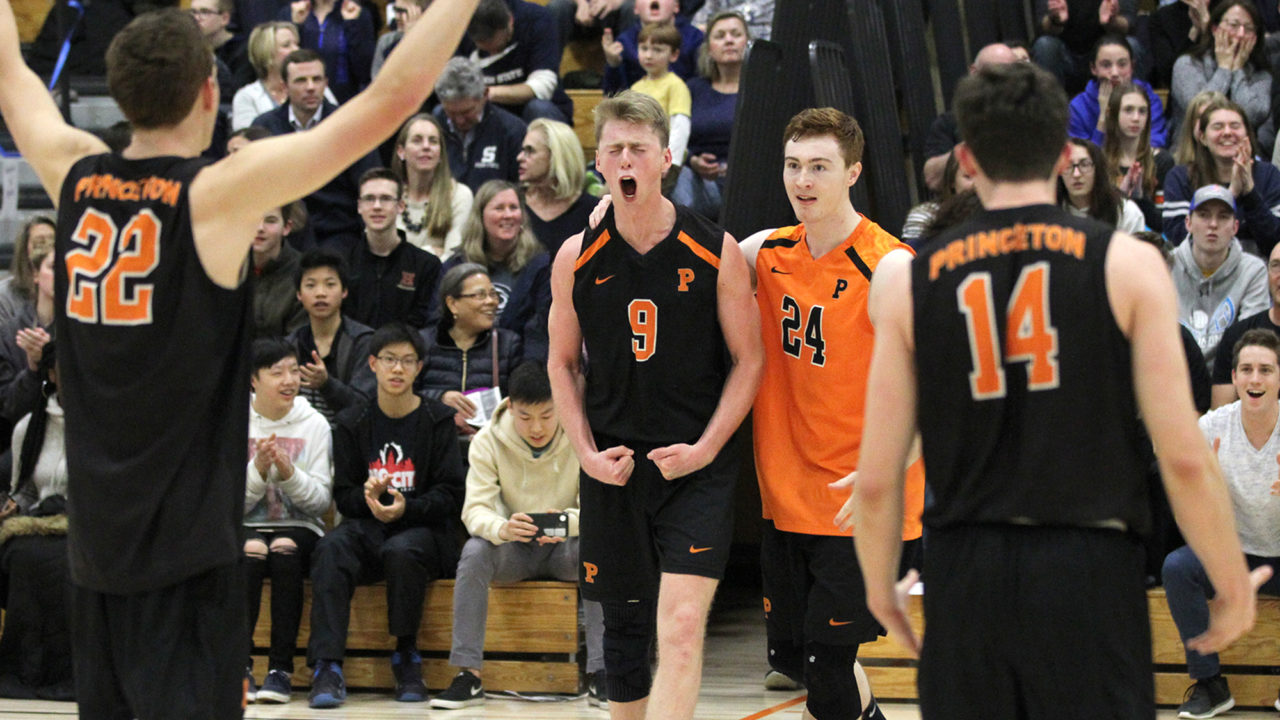 ig West regular season champion Long Beach State survived a three-hour marathon with No. 5 Hawaii to remain undefeated at 24-0. Meanwhile, No. 16 George Mason went the distance with Harvard to sew up the EIVA regular season title and Princeton picked up a historic sweep at No. 17 Penn State to grab the league's final playoff spot. Current Photo via Princeton Athletics

Big West regular season champion Long Beach State had its toughest challenge of the year Friday night and survived a three-hour marathon with No. 5 Hawaii to remain undefeated at 24-0. Meanwhile, No. 16 George Mason went the distance with Harvard to sew up the EIVA regular season title and home court advantage for the conference tournament for the first time since 2000.

In other EIVA action, Princeton picked up a sweep at No. 17 Penn State, the Tigers first ever road win in Happy Valley, to grab the final conference playoff spot. NJIT and Sacred Heart also won league contests.

It Was Over When: Set 5 featured 11 ties and four lead changes. Hawaii had two match point tries, but couldn’t finish the upset. LBSU also thwarted two more Rainbow Warrior match point attempts before closing out the match with a stuff by Tuaniga and Amado. The 49ers built a 10-7 lead in the stanza, including three kills and an ace by Ensing. Hawaii called timeout and scored six of the next seven, with two Parapunov putaways and a Solbrig ace. LBSU called timeout and got an Ensing kill out of the break, but a service error set UH up for the match at 14-12. A service error and hitting error kept Long Beach State in the game at 14-all and a stuff by Ensing and Amado gave the 49ers a shot at 15-14. A pair of Parapunov kills gave Hawaii another try at 18-17. After trailing 19-18, the 49ers closed out the win with a 4-1 run, including three DeFalco putaways before the final block.

Key Stats: George Mason claimed the EIVA title and home court advantage for the league tournament, outlasting Harvard on Thursday. A 65-52 lead in kills were the difference in a five-set win for George Mason as both teams managed five aces and nine blocks. The Patriots also outhit the Crimson .212 to .188 in the match, outdoing their foes in the three sets they won. In the decisive fifth set, George Mason outhit Harvard .100 to -.056.

It Was Over When: George Mason never trailed in Set 5, taking an early 4-2 lead and carrying it on to a 10-5 advantage. Four Harvard miscues, two Barnes putaways and an ace, a kill and a block by Wagner helped the Patriots to the five-point lead. The Crimson called timeout and narrowed the gap to two at 10-8 after kills by Kostich and Erik Johnsson. GMU scored four of the next six, three on Harvard errors, to earn a match-point try at 14-10. A service error held up the Patriots momentarily, but Malias closed the door at 15-11.

Stat Leaders: Sophomore middle George Huhmann downed a match-high 19 kills, more than doubling the closest offensive effort, while hitting at a match-high  .531 clip and adding three blocks. Sophomore outside Greg Luck followed with eight kills and three blocks, and sophomore outside Parker Dixon chipped in seven kills. All three served up an ace in the match, while senior outside Mike Fuerst accounted for two perfect serves.

It Was Over When: The Tigers jumped out to a 6-1 lead in Set 3 with help from two blocks and a kill by Junior Oboh. Trailing 9-3, Penn State narrowed the gap to three at 11-8 behind two Albrecht putaways. Princeton pulled away, scoring eight of the next 10 points to go up 19-10, including three PSU errors, two Huhmann kills and an ace by Dixon. The Nittany Lions would get no closer than seven the rest of the night. Luck downed two kills and added a block down the stretch, while Huhmann posted two putaways.

Key Stats: The Matadors hit at a .406 clip and outdid the Tritons in every statistical category in a four-set win, which snapped a three-match skid. A 7-3 edge in aces and 7-5 lead in blocks aided Northridge’s offensive advantage. CSUN outhit UCSD .406 to .272 and bested the Tritons 49-47 in kills.

Stat Leaders: Senior opposite Arvis Greene racked up a match-high 17 kills, while hitting at a .351 clip and adding two blocks and an ace. Four other players added six or more kills: senior middle Josiah Byers (10), junior middle Eric Chance (9) and junior outside Dimitar Kalchev (6). Byers hit at a match-leading .818 clip with just on error in 11 swings, while also putting up a team-high three blocks. Chance also notched three stuffs and hit .727 with just a single error. Kalchev served up three aces alongside freshman outside Maciej Ptaszynski. Ptaszynski also managed a team-best nine digs.

Senior opposite Tanner Syftestad returned after missing two matches due to illness to lead the Tritons with 12 kills. Freshman outside Wyatt Harrison added 111 kills and two blocks, while redshirt senior middle Bryan Zhu and senior middle Alec Flowers chipped in seven kills apiece. Zhu hit at a team-high .357 clip and tallied two blocks and an ace, while Flowers put up a team-leading three stuffs.

It Was Over When: Northridge never trailed in Set 4, scoring the first point on a Kalchev kill and pushing ahead by five at 9-4 with help from three UCSD errors and two blocks. With his team trailing 11-5, Syftestad downed three kills and Xander Jimenez added an ace to cut the margin to four at 13-9. CSUN scored four in a row to kick off an 8-2 run, which put the Matadors up 21-11. Ptaszynski notched a kill and served up back to back aces to wrap up the stretch. UC San Diego did not go away quietly, scoring four of the next five, but that only narrowed the gap to seven (22-15). A Kalchev kill and UCSD hitting error gave Northridge its first match-point try at 24-15. Kills by Zhu and Connor Walbrecht kept the match going, before a service error wrapped up the Matador victory.

Key Stats: In a match with two deuce sets, hitting errors were the difference. Saint Francis outdid NJIT 38-37 in kills and 8-3 in aces, while both teams managed seven blocks. But, it was a .261 to .138 lead in hitting efficiency and 10 less hitting errors (23-13) that helped the Highlanders to victory. The Red Flash committed 11 errors in the opening stanza of their ninth-straight loss, hitting -.029, while NJIT hit .259. The Highlanders also outhit Saint Francis in Set 3, .333 to .242.

It Was Over When: The lead changed hands six times in Set 3 with NJIT grabbing the advantage for good at 22-21 and overcoming a late surge by the Red Flash for the 26-24 win. Saint Francis led by three at 10-7 and 11-8 behind three Braswell kills and three Highlander miscues. A 4-0 run, including three straight Namiotko kills, gave NJIT a brief 12-11 advantage. SFU regained the lead at 13-12 and held on through seven ties to boast a 21-20 edge. A kill and an ace by Namiotko bookended a 3-0 NJIT rally and put the team up 23-21. A Gimeno putaway put the Highlanders on the hill at 24-22. Braswell responded with a kill and a block to tie it up at 24. In the end, a Myren kill and a stuff by Gimeno and Berger capped the sweep.

It Was Over When: Sacred Heart cruised to an 8-3 lead in Set 3 as Chatterton and Costigan tallied two kills apiece. Up just three at 11-8, the Pioneers scored six of the next nine, including two Costigan putaways and a pair of Eagle miscues. A block and an ace by Chatterton upped the SHU lead to seven at 21-14. A service error and an Anthony Rivera ace had Charleston within five at 21-16, but Sacred Heart wrapped up the match with four of the final six points, bookended by UC service errors.