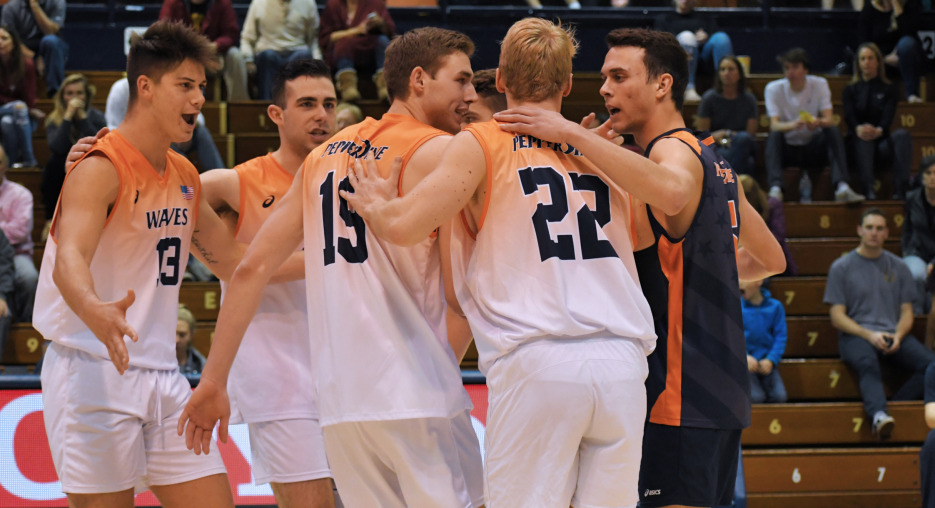 The road teams came up victorious in four key matches across the country. No. 1 Long Beach State hit the... Current Photo via Pepperdine Athletics

The road teams came up victorious in four key matches across the country. No. 1 Long Beach State hit the road and bested No. 2 UCLA in four sets for the second time in four days. No. 11 Pepperdine edged No. 10 UC Santa Barbara in five sets, while No. 7 BYU topped No. 19 Stanford in four with help from its national-best block. In Conference Carolinas action, Barton topped Mount Olive in five sets in a battle of the unbeaten.

Key Stats: Barton dominated the offensive side of the ball, outdoing Mount Olive 70-49 in kills en route to a five-set win, which snapped UMO’s seven match win streak and issued the team its first Conference Carolinas loss. The Bulldogs also outhit the Trojans .265 to .200 and bested them 4-2 in aces. UMO won the block 11.5 to 10.5.

Stat Leaders: Junior outside Aleksa Brkovic dropped a career-high 30 kills and rounded out a double-double with 10 digs and two aces, while hitting at a .404 clip to pace the Bulldogs. Junior outside Vasilis Mandilaris (15 kills, 12 digs) and sophomore right side Angelos Mandilaris (11 kills, 16 digs) also posted double-doubles. Junior middle Justice Lord and redshirt sophomore setter Oscar Florentino guided the team at the net with six and four blocks respectively.

Junior outside Brad Monaghan and freshman middle Jerell Rogers carried the offensive load for UMO with 17 and 13 kills respectively. Rogers hit at a match-high .545 clip with just one error and added three blocks, while senior opposite Bret Rutledge followed with nine kills and eight digs. Freshman middle Eric Visgitis led the team’s blocking efforts, putting up seven stuffs. Reigning VolleyMob Player of the Week Robert Poole hit -.429 in the match with zero kills and three errors in seven swings.

It Was Over When: Barton notched four of the first five points in the decisive fifth set, with three coming on Mount Olive miscues. The Trojans battled back, however, rallying to tie  the score at 10 and 11 before taking a 12-11 lead of their own on a Monaghan kill. Monaghan and Rutledge downed three kills each in the rally. Trailing 13-12 after another Monaghan putaway, Barton rallied with three straight points to steal away the victory. A service error, a solo stuff by Lord and a hitting error closed out the match.

Key Stats: The national leader in blocks per set, BYU lived up to its reputation, putting up 13 stuffs in a four-set road win over Stanford, its sixth straight victory. The 13-4 blocking edge and a 9-6 lead in aces, helped the Cougars overcome a 62-49 deficit in kills. BYU also outhit the Cardinal .294 to .276 in the match.

It Was Over When: BYU cruised to an early 11-3 in Set 4 with help from two kills and an ace by Garcia Fernandez and five Stanford miscues. The Cardinal cut the lead in half at 12-8 as Presho, Beatty and Jasper posted kills and Russell Dervay added an ace. Three Stanford errors and aces by Miki Jauhiainen and Fa’agata-Tufuga pushed the margin back to seven at 18-11. Beatty notched two kills and an ace as the Cardinal put together an 8-3 run to slash the deficit to two at 21-19. Up just two at 22-20, BYU capitalized on a service error and hitting error to earn a match-point try at 24-20. Another service error closed out the match two points later.

Key Stats: UCSB made a statement that they are ready to play, pushing No. 11 Pepperdine to five sets in its first ever MPSF match, but fell just short. The Gauchos outhit the Waves .246 to .190 and edged them in kills (56-55). Pepperdine won the battle at the service line 8-4 in aces en route to its third straight win. Both teams put up 13 blocks in the marathon match.

It Was Over When: UC Santa Barbara held the upper hand at 10-7 in Set 5, but could not hold on for the victory. Pepperdine committed five errors, four from the service line, while Sanders downed two kills in the early stages of the stanza. The Waves turned it around with an 8-2 run to grab the win. Two Gaucho errors and kills by Wieczorek and Harriman tied it up at 11 and a third by Harthaller put Pepperdine up 12-11. UCSB called timeout and tied the score at 12 on a Chavers putaway, but a hitting error and back to back aces by Chamberlain secured the Wave victory.

Key Stats: In a match that was fairly even across the board, the No. 1 ranked 49ers found the edge in kills (67-55) and hitting efficiency (.408 to .315) en route to their second win over the Bruins in four days. UCLA owned a slight 8-7 edge in blocks and both teams managed three aces.

It Was Over When: In a set that featured nine ties, neither side led by more than three until the latter stages. Long Beach State led 3-0 thanks to two UCLA miscues and an Ensing kill, but Jake Arnitz answered with back to back kills to bring it to a 3-3 tie. Later, trailing 13-11, the Bruins rallied with three straight, including a kill and a block by Ian Parish to grab a 14-13 advantage. Down 18-16, the 49ers scored three straight, with two DeFalco putaways, to reclaim the lead. The teams tied at 19, but it was nearly all Long Beach State from there. The 49ers ended the set on a 6-2 run, including kills by four different players and a Nick Amado ace. Huus notched the final putaway.