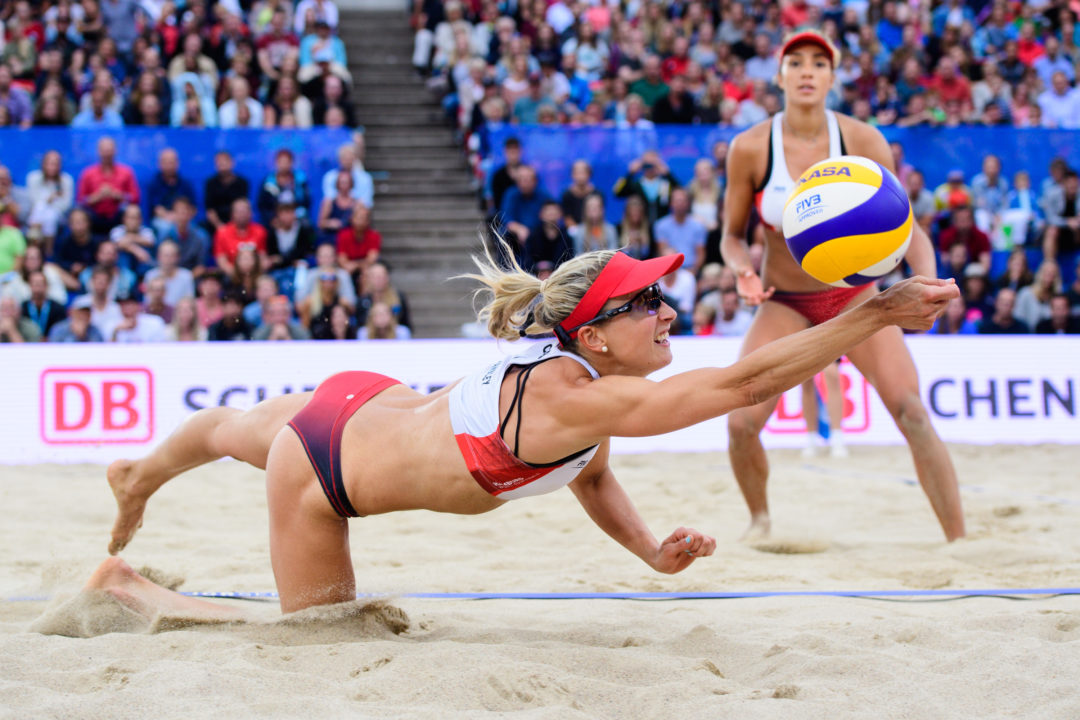 VolleyMob caught up with the Canadian duo Heather Bansley/Brandie Wilkerson to talk about their standout year, the strength of Canadian beach volleyball and their new sponsorship deal with Kerri Walsh Jennings' P1440. Current Photo via FIVB

The Chetumal Three Star quarterfinals will include two teams each from Brazil, Canada and the United States as well as one each from Mexico and Russia.

Canadians Heather Bansley and Brandie Wilkerson had a break out season on the FIVB Beach World Tour.

The pair played their first FIVB tournament together at the Sept. 2016 World Tour Finals in Toronto, finishing ninth. Since then, the duo has posted 17 Top 10 finishes, missing just twice. In 2018, their success has included four medals – gold at the Warsaw Four Star (July 1), silver at the Ostrava Four Star (June 24) and bronze at the Itapema Four Star (May 20) and Gstaad Major (July 15). The pair wrapped up their season with a fifth-place effort at the FIVB World Tour Finals.

VolleyMob caught up with the pair to talk about their standout year, the strength of Canadian beach volleyball and their new sponsorship deal with Kerri Walsh Jennings’ P1440.

1. What drew you to Kerri Walsh Jennings, p1440 and the sponsorship? What difference do you think that will make for you on the FIVB Tour and beyond?

I was drawn to play p1440 because it’s exciting to see that Kerri Walsh Jennings and p1440 are taking beach volleyball events and expanding them into something bigger. I believe in p1440’s vision for growth and awareness of our sport, and I want to support and be a part of it!

Competing in p1440 events is also an opportunity to have more competition against high level teams.  We don’t have a national tour in Canada, so it’s a really great opportunity for us to play more and get exposure. I think it will help our beach volleyball game, but also hopefully create some excitement and awareness in Canada around what a tour could potentially be.

2. Since May, you managed seven Top 5 finishes in eight tournaments, including the gold at the Warsaw Four Star, bronze at the Gstaad Major and fifth place at the World Tour Finals last week. Did you change something in your training, is it luck of the draw or are things just clicking for you lately?

I think it is a combination of a few things for us. It’s our hard work and dedication that we have put in paying off. And also, it’s our second season together as a team, and we are getting to know each other better on the court and off. We’ve learned to really stay tight as a team, and I think that is a big strength of ours. We are now working with a new coach and we’ve increased our professionalism.

3. Since teaming up, you have racked up 19 Top 10 finishes, including four podium finishes. What has been the key to your quick and yet sustained success?

A lot of work has gone in, in the years prior to our success as a team. When we came together, we were both bringing a lot to the partnership. I think our success as a team has been because we work well together, we both really want to work hard and have a strong will to win.  We both have high expectations of ourselves and always want to improve and keep pushing ourselves and our game.

4.You have played several of your Canadian cohorts on the FIVB Tour, including your former partners. Is there a different mindset when you are playing a team and/or player you are more familiar with?

I always try to treat each opponent I face the same way, as another competitor across the net.  Sometimes you will play people who you have trained with or play against often, and for me that means you know their tendencies better and have more information about them, but they also know as much about you. But when it comes time to play, they are like any other player or team across the net.

5. Speaking of partners… Heather, you parted ways with Sarah Pavan after the 2016 Olympics, but both of you have seemingly picked up right where you left off finding much success in 2017 and 2018. What does that and also the success the McNamara twins have found collegiately and abroad mean for the future of Canadian volleyball?

It’s really exciting to see the success of our Canadian women’s teams internationally. The success of our women has shown the world and also Canada that we are world class and capable of being the best. I think this is key to the development of our program in Canada, showing the pathway for the future and what can be done in our sport, and provide our youth athletes with some great role models.

Naturally we’ve gotten to know each other better as people off of the court, as well as on the court. I think that has really helped us mold into our roles on the court, and support and push one another. We faced a few coaching changes over the last two seasons, and I think that really pushed Brandie and I — to know how to be independent and taught us to see what we value in a team and kept the two of us tight.

We want to be the hardest working team. Our long term goal is to be at the Tokyo 2020 Olympics representing Canada.

7. Talk about your partner and what she brings to the table. What do you value in your partner? How do you get each other through the ups and downs a tournament and season can bring?

Brandie brings a willingness to win and with that an openness and honesty to learn. I really value her vulnerability within our team, and see that as a big strength of hers. I think a key to our partnership is we allow each other to take risks, and to get better as individual athletes and as a team. We trust and have created a safe environment that we know we are pushing ourselves to be better.

Brandie also brings a lot of energy, and positivity to our partnership. That really helps with the ups and downs over a tournament and season! Our goals and team culture are also a good anchor for us—we remind ourselves and each other of our goals and what is going well and what do we need to reevaluate.

9.  You have traveled the globe for volleyball. What is your favorite place to play?

It really is a privilege to see the world, but my favorite place to play is in Canada.  Nothing beats having the home crowd, family and friends behind you and cheering for you.

Winning our first FIVB World Tour tournament this season in Warsaw, Poland. It was July 1st, which is Brandie’s birthday, as well as Canada Day. To win gold for the first time is really special, but to win on that day made it extra special! 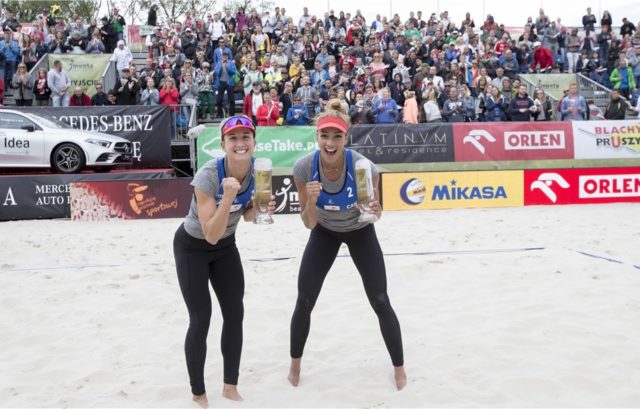