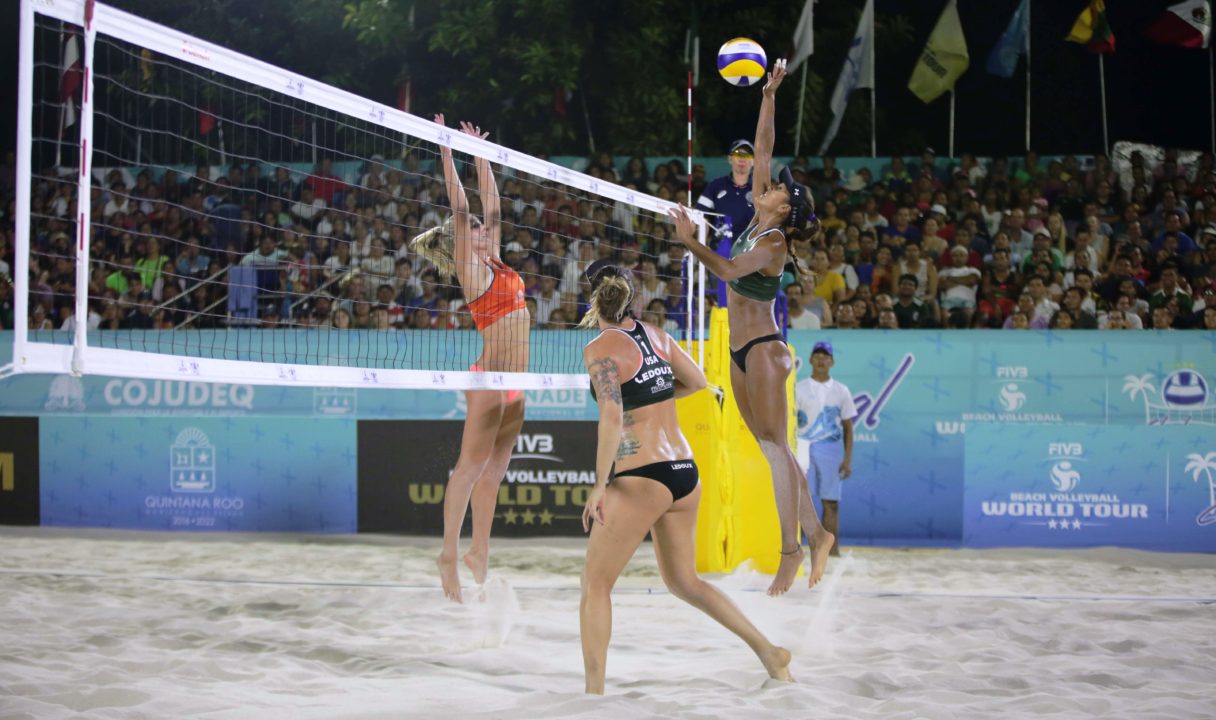 American qualifiers Caitlin Ledoux and Geena Urango are on to their first FIVB World Tour title match after picking up two more wins at the Chetumal Three Star on Saturday.

The pair swept Mexico’s No. 8 seed Martha Revuelta/Zaira Orellana (21-18, 21-13) in the quarterfinals and rallied past Canadians Megan McNamara/Nicole McNamara in tiebreak in the semifinals (15-21, 21-15, 15-13). The win over the Mexicans avenged a pool play loss.

“It’s awesome,” Ledoux said. “For our first tournament together in the World Tour, we are having a great experience and to come this far, it’s impressive. We played some very good teams and needed to make some adjustments on the way. It has been a great tournament and I’m really proud of us so far.”

Top seeded Heather Bansley/Brandie Wilkerson swept Russia’s Bocharova/Voronina (21-17, 21-16) in the quarters and third seeded Americans Kerri Walsh Jennings/Brooke Sweat in the semis (21-18, 21-17) to earn the other spot in the finals.

“It’s tough, every week is really challenging,” Bansley explained. “We really had to dig deep. This is our last tournament in 2018 and we want to finish it on a high note, so we just need to stay focused for one more match. We’ll keep doing what we’ve been doing, we’ll focus on our side. Our blocking-defense has scored us a lot of points, so we’ll rely on that.”

Ledoux/Urango played in two AVP tour events together in 2018, finishing second in San Francisco and third in Hermosa Beach. This is the pair’s first FIVB event. Ledoux won gold at the Satun One Star with Emily Stockman (April 11), silver with Jace Pardon at the Shepparton One Star (Feb. 4) and teamed up with Sarah Sponcil for third place at the Haiyang Three Star (July 22). Urango played in one FIVB event in 2018, teaming up with Allison McColloch for 25th place at the Huntington Beach Open (May 6).

The title match is the fourth of the year for Bansley/Wilkerson, following golds at the Las Vegas Open last week (Oct. 21) and Warsaw Four Star (July 1) and silver at the Ostrava Four Star (June 24).

Walsh Jennings/Sweat will meet the McNamara twins for the bronze. Walsh Jennings/Sweat are playing in just their second tournament together after pairing up ahead of last week’s Las Vegas Open. The McNamaras are making their sixth FIVB Tour appearance of 2018, with their best finish coming in a fourth-place effort the Bangkok One Star (May 13).