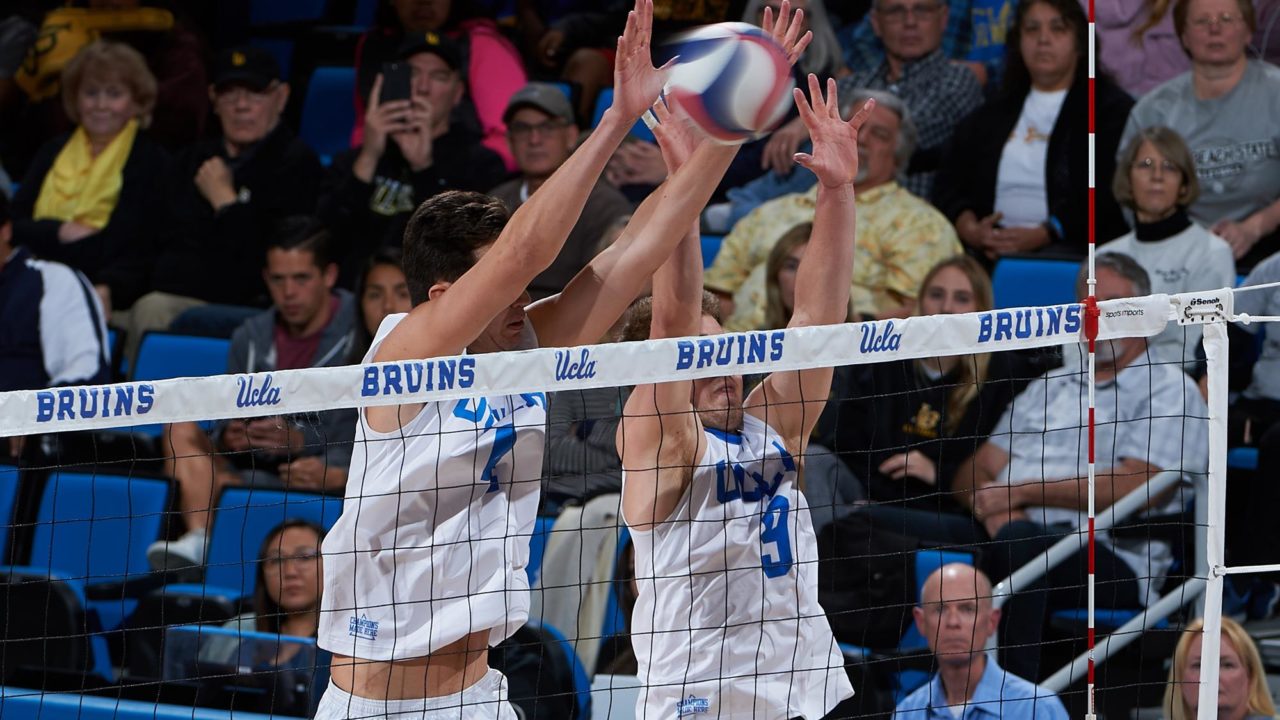 A balanced attack, with four Bruins posting double-digit kills and hitting at a .300 or better clip, coupled with a season-high 16 blocks and nine aces was enough to lift No. 4 UCLA past No. 13 Grand Canyon and to their fourth-straight victory on Friday night.

Senior opposite Christian Hessenauer (16), senior outside Jake Arnitz (12), junior outside Dylan Missry (10) and sophomore middle Daenan Gyimah (10) made up the group. Gyimah also managed a match-high eight blocks and three aces, while hitting at an errorless .588 clip (10-0-17). Hessenauer tacked on eight digs and six blocks. Junior setter Micah Ma’a served up four of the team’s nine aces, while guiding the Bruins to a .345 hitting effort.

Junior outside Will Schwob and redshirt senior outside Cullen Mosher led the way for GCU with 14 and 13 kills respectively. Schwob hit at a team-best .367 clip, while rounding out a double-double with a team-high 10 digs. Freshman outside Trevor Weary followed with eight kills and a team-leading three blocks. Sophomore middle Caleb Blazer also added three stuffs.

After playing to a 6-all tie in Set 1, UCLA built a four-point edge at 12-8 with help from three blocks and a kill by Gyimah. Up three at 16-13, the Bruins surged again with five straight points, including two Micah Ma’a aces, to kick off a final 9-2 rally to close out a 25-15 win. Three Lopes miscues and two Gyimah kills also aided the Bruins in the stretch. UCLA hit at a .450 clip in the stanza, while holding GCU to a .043 effort.

Ma’a served up two aces and Gyimah added a third as UCLA went up 8-5 in Set 2. Three Grand Canyon errors and a Hessenauer kill pushed the Bruin lead to four at 12-8. The lead teetered between two and four the rest of the set. Up 21-19, the Bruins scored four of the final five to notch a 25-20 win. Dylan Missry downed two kills and Gyimah added an ace to set up the final point on a Jake Arnitz putaway. UCLA made just one hitting error, hitting .565 in the stanza, to go with four aces. For their part, the Lopes hit .417.

Grand Canyon regroup at intermission and worked its way out to a 16-12 lead midway through Set 3 as five players notched kills. Schwob downed three kills and Weary added three, while UCLA committed five errors in the first half of the set. The Bruins used a 3-0 run, including solo stuffs by Missry and Gyimah to close the gap to one at 19-18 and kills from the duo to knot the score at 21. The Lopes held on for the win with a final 4-1 run, including a Schwob kill, stuff by King and Weary and two UCLA miscues. Schwob tallied six kills in the stanza as GCU outhit the Bruins .273 to .182.

After falling behind 8-6 in Set 4, UCLA charged back with 12 of the next 15 points to turn the deficit into a 18-11 advantage. Three Oliver Martin blocks led a 5-0 run to start the rally. Four Bruins notched kills and Missry added an ace to give UCLA the seven-point lead. Back to back aces by Shalev Saada pulled the Lopes within four at 18-14. Later, down 23-16, GCU scored four in a row, including two Bruin hitting errors, to slice the margin to three. In the end, UCLA got kills from Missry and Hessenauer to hang on for the 25-21 win and the match.