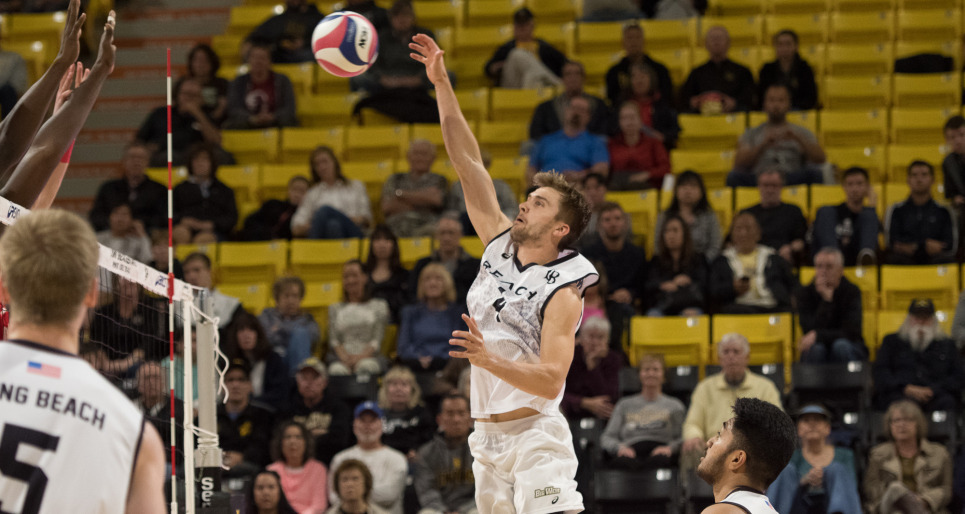 The nation’s best offensive team in terms of hitting efficiency showed why again on Friday night, as Long Beach State hit at a .456 clip, including an error-free third set (.667) in a four-set win over No. 10 UC Santa Barbara.

Junior opposite Kyle Ensing and junior outside TJ DeFalco notched 15 kills apiece and senior outside Bjarne Huus added 10 to pace the LBSU offense. Freshman middle Simon Anderson chipped in seven kills on a team-best .778 clip (7-0-9). Huus rounded out a double-double with 11 digs and three blocks, while Ensing turned in a team-high five blocks and DeFalco added three. Anderson served up three of the team’s six aces.

Long Beach State dropped its first set since Feb. 21 and first in Big West play, falling 26-24 in the opening set Friday night despite outhitting UCSB .371 to .281 and notching four more kills (17-13). The set featured 17 tie scores and six lead changes, but neither team led by more than two. The 49ers led 16-14 midway through after a 6-2 run including three kills and an ace by Ensing. After eight ties, the last at 23-all, a Truman putaway gave the Gauchos the first set-point try at 24-23. A DeFalco kill leveled the score, but another Truman kill and one by McFarland gave UCSB the win.

The 49ers hit .407 in Set 2 and rode five DeFalco kills and four by Huus to the 25-15 victory. DeFalco notched three kills as LBSU built an 8-3 advantage and forced a Gaucho timeout. UCSB was within three at 10-7 thanks to two blocks and two 49er miscues, but Long Beach State rattled off seven of the next 10 points to surge ahead 17-10. Three Santa Barbara errors and an ace by Anderson aided the run. Two miscues slowed LBSU temporarily, but the 49ers responded with a final 8-3 run. Two kills each by Huus and DeFalco and two Gaucho service errors helped Long Beach State to a 24-14 advantage. Another service error clinched the 25-15 victory.

An errorless third set saw LBSU hit .667 (14-0-21), while limiting UCSB to a .154 hitting effort. Up one at 5-4, the 49ers broke away with a 12-4 run. Four Gaucho errors, two Huus kills and aces by Anderson and DeFalco guided the 49ers to the nine-point lead. The teams split the next 10 points, before an Ethan Siegfried ace kicked off a final 3-1 run. A DeFalco kill gave Long Beach State the 25-14 win on its second set-point try.

UCSB started Set 4 on fire, racing out to a 6-3 advantage including two kills and an ace by Corey Chavers. LBSU countered with eight of the next 11 points to grab an 11-9 lead as six Gaucho errors piled up. Three more miscues and an Anderson ace pushed the 49er edge to three at 15-12. Sanders cut the margin to one at 16-15 with two putaways, but it was not enough. Long Beach State wrapped up the match on a 9-5 run, including three kills and two block by Ensing.

The Beach have now won 19-straight matches as they improve to 19-0 overall and 4-0 in Big West action. Meanwhile, the Gauchos drop to 9-7 on the year and 2-2 in league play.

Long Beach State turned in a .456 (55-8-103) attack percentage in the match and posted 9.5 total team blocks, as the Beach limited UC Santa Barbara to just .190 hitting in the contest.

Junior setter Josh Tuaniga led the Beach as he ran a solid offense dishing out 47 assists, while adding four kills on as many swings without committing an error. With Tuaniga pacing the offense with his perfect sets, the Beach tallied three double-figure kill performances.

Kyle Ensing and TJ DeFalco led the way with 15 kills each, while senior Bjarne Huus added 10 kills to go along with 11 digs to record his first-career double-double. Huus was on point throughout the match as he hit .389 (10-3-18), while adding three block assists and one assist.

Junior libero Jordan Molina set the defensive tone as he tied his career-high with 12 digs, while collecting 17 receptions without an error.

The first set was back-and-forth throughout as the two teams battled through 18 ties and six lead changes in the frame. Despite the effort from the Beach, the Gauchos managed to pull out a 26-24 victory to take the first set. It was just the fourth set that Long Beach State has dropped all season.

Down 1-0, Long Beach State started the second set knocking down three-straight points to take a 3-0 lead that it would never relinquish. The Beach led the entire set and went on to cruise to a 25-15 victory to even the match at one set apiece.

In set three, Long Beach State used a sizzling .667 attack percentage to win in convincing fashion, 25-14. The Beach tallied 14 kills on 21 attempts and did not commit one attack error. They owned a 92-percent sideout percentage and dominated the game winning by and 11-point margin.

The Beach and Gauchos went back and forth early in the fourth set before Long Beach State took advantage of a UCSB attack error to take an 8-7 lead. From there, the Beach led the rest of the way. LBSU extended its lead to three (18-5) forcing a UC Santa Barbara timeout and went put the set and match away, winning 25-20.

UC Santa Barbara received solid performances from Keenan Sanders and Jack Truman. Sanders notched a double-double with 11 kills and 11 digs, while Truman added 11 kills of his own.

Long Beach State will be back in action on Friday, March 30, when it hosts No. 5 UC Irvine in the Black and Blue Rivalry at 7 p.m. inside the Walter Pyramid.

With the win, top-ranked LBSU maintained their undefeated record at 19-0, 4-0 Big West. UCSB saw its record drop to 9-7, 2-2. The two teams faced off against each other as well on Thursday night at the Walter Pyramid in Long Beach, with the 49ers pulling off a 3-0 sweep.

The 49ers meanwhile were led by the pin tandem of outside hitter TJ DeFalco and opposite Kyle Ensing, who recorded identical lines of 15 kills on 33 swings. The visitors outhit UCSB .456 to .190 for the match.

In front of a packed crowd at Rob, UCSB eked out a gritty first-set win, as the Gauchos and 49ers were neck and neck practically the whole way. UCSB kept the pressure on early with solid serving – the Gauchos had just one service error in the first – taking an 11-9 lead on a roof of a right-sided swing from reigning AVCA National Player of the Year TJ DeFalco. From there, LBSU went on a 4-1 run to take its first lead of the match and set up a see-saw battle down the stretch.

A Sanders kill from the right side to make it 20-19 proved crucial, as UCSB would hold a one-point lead or tie the rest of the way. UCSB sophomore setter Casey McGarry effectively used his middles at the end of the set, feeding Connor Drake (five kills overall) and Truman to set up three back-to-back set points for the Gauchos, who eventually capitalized as McFarland slammed down an overpass to cap off a long rally and clinch the game.

The early deficit marked just the second time this season that LBSU, which had only dropped three sets all year entering the match, found itself trailing in a match.

Unfortunately for UCSB, the 49ers would go on to find their mojo in the contest’s final three sets. Apparently unfazed by the first-set loss, LBSU went on to hit .406 in the second set and rode five kills from DeFalco on eight swings to tie the match at one all.

LBSU was even better in the third, jumping out to a 10-5 lead early and eventually hitting .667 for the frame with all six players on the court recording multiple kills and no errors. The 49ers frustrated the Gauchos to the tune of 4.5 blocks in the fourth and final set, receiving five kills on nine swings from Ensing to close it out. The set was fairly close until the end, with the 49ers turning a one-point lead into a comfortable 20-16 advantage on a quick hit from middle Nick Amado and back-to-back blocks from Amado and Ensing.

UCSB will not play any matches next week as the team takes final exams. The Gauchos are next in action on Wednesday, Mar. 28 at UCLA before taking on Big West rival CSUN in a home-and-home series that Friday and Saturday.