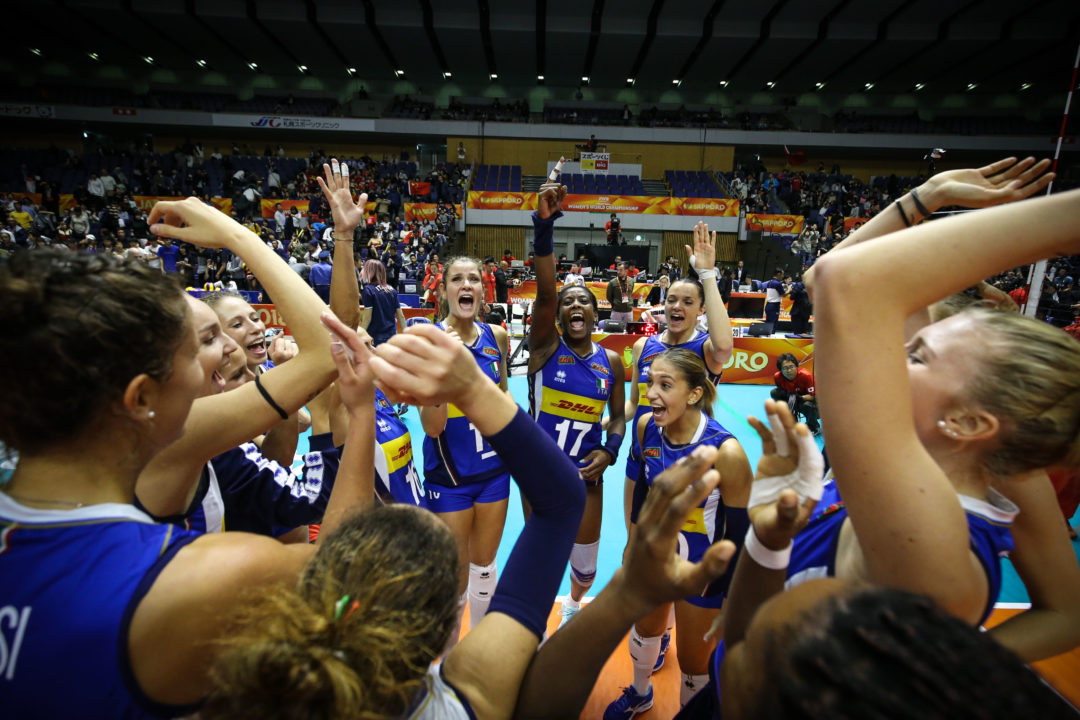 Italy enters Pool F in first place after the First Round. Current Photo via FIVB

This is the more difficult of the two pools of the Second Round. Four of the top seven teams in the FIVB World Rankings are in this pool, including China (no. 1) and the United States (no. 2). Russia and Thailand also took an undefeated United States to a tie-break in the First Round. The pool is heavy with teams from Europe, with two teams from Asia, and one from North America.

It is tough to realize that either the United States, China, Russia, or Italy will not be moving out of this pool. The United States has been tested, and has pulled out on top each time. One must think that type of experience will help in such a long tournament. Luckily they have already faced Thailand and Russia in their previous pool. They have been very balanced through the first pool with Kelly Murphy leading the way with 60 points. Jordon Larson (47), Michelle Bartsch-Hackley (45), Kimberly Hill (45), and Foluke Akinradewo (43) are right behind in terms of point production.

Italy was on fire throughout their first pool, losing only a single set in their last match against China. Myriam Sylla is the most efficient attacker in the tournament so far with a 62.82% attack average. Anna Danesi is the leading blocker so far at 1.12 blocks per set. The win against China was significant, but they will have to face stiffer competition this time around.

Russia is led by Nataliya Goncharova, the tournament’s leading scorer with 119 points. Russia also boasts the best passer’s in the World Championships in Ksenia Parubets and Alla Galkina. They were just one tie-break away from entering Pool F with a perfect 5-0 record and in second place. They will have to move up out of fourth position to advance and need favorable decisions against a red-hit Russian team and an always-solid Chinese squad.

*Predicted to Advance to Final 6

I think the United States staying unbeaten with Italy also dropping a match to Russia. Italy and Russia will both finish with a pair of losses, but those that loss in the tie-break to the United States will provide the point needed to see them advance.