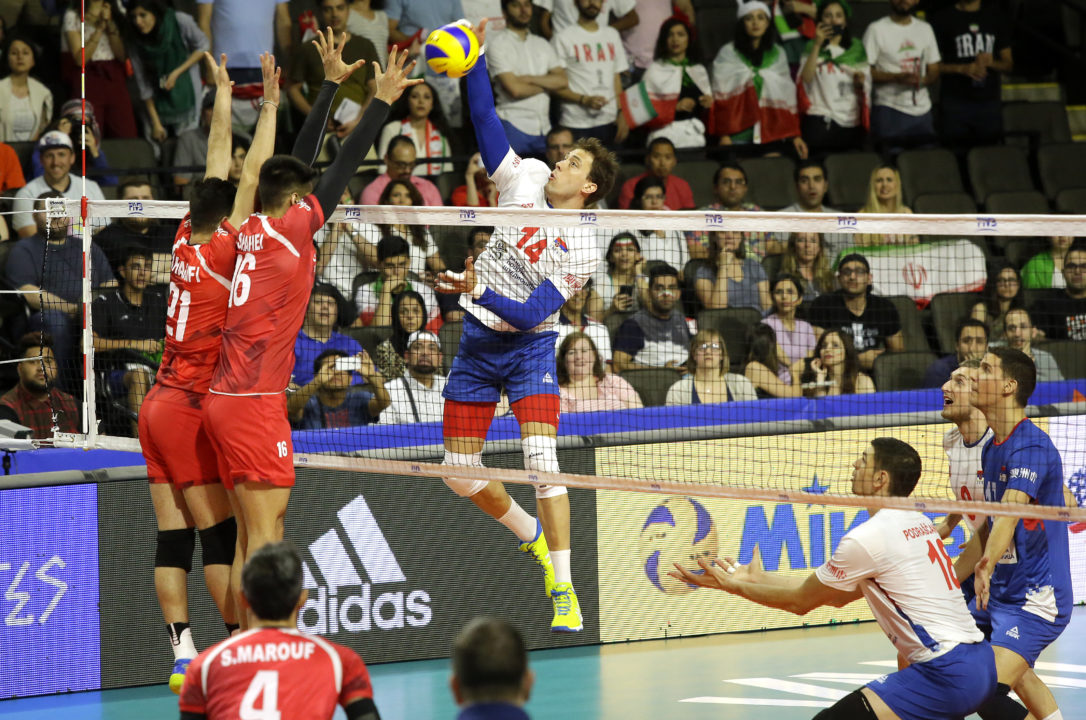 With weekend left to go, this pool essentially constitutes a logjam in the middle of the table. Coming into the pool, Serbia is the only team in position to qualify for the Final Round in Lille, France starting on the July 4. Though they are in 6th place they are by no means a lock to advance. The good news is they control their own destiny. If they win all 3 of their matches this weekend, they will book a ticket to France. Winning 2 matches will put them in good shape. The only way they win 2 matches and fall out of the top 6 is if Italy goes 3-0.  That would put them level on record, but since Italy has more points heading into the weekend, they would likely move ahead of Serbia. Italy would have to win all of their matches in 5 sets. Serbia would have to win both of their matches in 3 or 4 sets and lose in 5 sets. If that happens, they would be level on 27 points and they could still be ahead on sets ratio. Luckily for Serbia, Italy plays the United States, France, and Russia this weekend. It will be difficult for any of those teams to go 3-0.

Canada and Japan are just outside of the qualification range at 8th and 9th respectively. Unfortunately for each of them, they will need help in order to qualify for the Final Round. Either of them will have to get 2 more victories than Brazil, Poland or Serbia. In addition to that, they must earn 1 more win than Italy. If that happens for Canada or Japan then it will come down to points. It is unlikely, but not mathematically impossible for either of these teams to be playing in Lille.

China is in 15th place and only has earned 6 points in their 2 wins thus far. They have been mathematically eliminated from Final Round contention. Since they were not in last place coming into the final weekend, they are safe from relegation and will not be replaced by the winner of the Challenger Cup.

This pool will essentially come down to how much of a priority this competition is for Serbia, Canada, and Japan. With the World Championships around the corner, travelling another weekend and potentially playing 4 more matches in July might not be a favorable scenario for some teams. After beating Brazil last weekend, Canada sat their strongest players against France on Sunday. Serbia played a lineup that looked more like what we might see at the World Championships. They made substitutions when players were not performing, and their coach, Nikola Grbic, gave the impression that the matches were important.

If all of the teams come to China with the goal of reaching the Final Round, it could be a captivating 3 days of volleyball. On paper it would look like the match between Serbia and Canada on Friday would have potential implications for reaching the top 6. Gavin Schmitt of Canada squaring off against Aleksandar Atanasijevic would be a match-up of offensive juggernauts.

Japan could play the role of spoiler. While they have 6 wins in the Preliminary Round, none of those wins have come against a team in the top 6. They were able to pull off a 3-2 win over Italy, and gave the United States a considerable challenge when they lost 3-2. Many things have to fall into place for them to continue playing after this weekend, but they could play a part as to who go on to France and who goes home after Sunday.