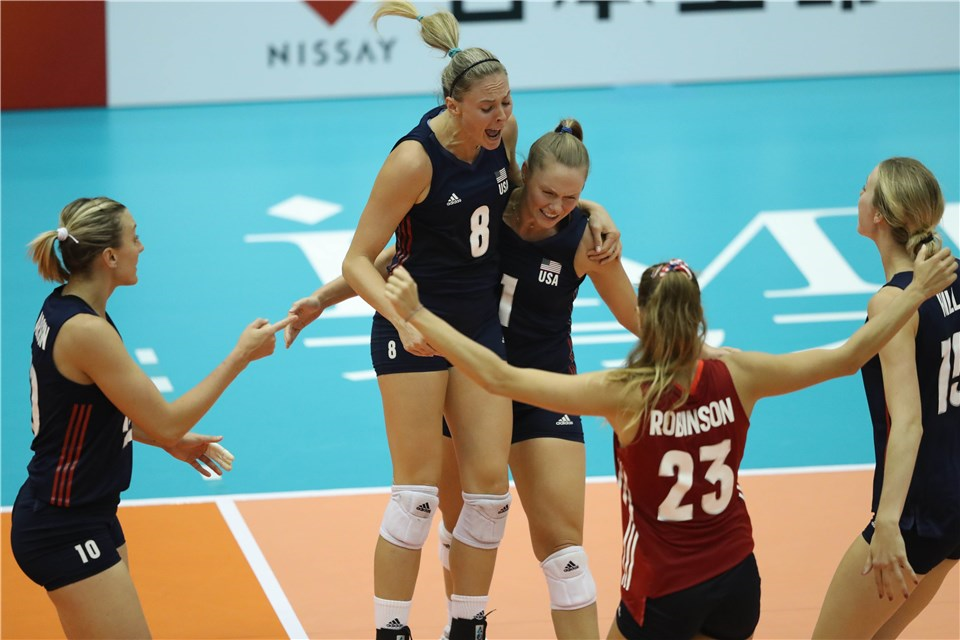 At the end of the day, the Netherlands, Italy, the United States and Serbia wrapped up the preliminary round with perfect 5-0 marks and pool titles.  Current Photo via FIVB

The Round 2 field is set after 12 final preliminary matches on Thursday.

Of the matches, seven were decided in sweeps, four went four sets and just one went the distance.

Bulgaria, the Dominican Republic and Mexico earned the final spots in the second round. Mexico made it through care of an Argentinian win over Cameroon, despite being swept by the Dutch.

The round 2 matchups are set. Pool E, which will play in Nagoya, includes Brazil, the Dominican Republic, Germany, Japan, Mexico, the Netherlands, Puerto Rico and Serbia. Azerbaijan, Bulgaria, China, Italy, Russia, Thailand, Turkey and USA will compete in Pool F in Osaka.

The lone five setter of the day was a battle for the top spot in Pool C, with the United State rallied for the victory to go 5-0.

Akinradewo and Lowe paced the offense and Wilhite starred from the service line as the USA edged out a 26-24 win in Set 3.

Russia grabbed a 16-7 lead in Set 4 behind Voronkova and Fetisova. The team followed Koroleva and Parubets down the stretch to a dominant 25-12 victory.

The USA turned the tables, jumping ahead 8-3 in Set 5. A stuff by Lauren Gibbemeyer made it 12-5 after a Russian timeout and a Parubets hitting error sealed the American victory at 15-11.

Korea’s Jeongah Park tried to take her team’s fate into her own hands, delivering 26 points in a sweep of Trinidad and Tobago. South Korea got the win, but fell short in advancing to the second round, finishing 1-4 in Pool C.

Park notched 26 points over the three-set affair, including 24 kills and two aces.

“I decided to retire from the national team last year,” Argentina captain Emilce Sosa. “I wanted to spend a little more time with my family and also take some rest. I have been playing for the national team for eight years and when the coach selected me for this squad I was happy that I would be able to retire at this competition, so I accepted the selection. I wanted to play for my teammates and I wanted to do my best for my country as well.”