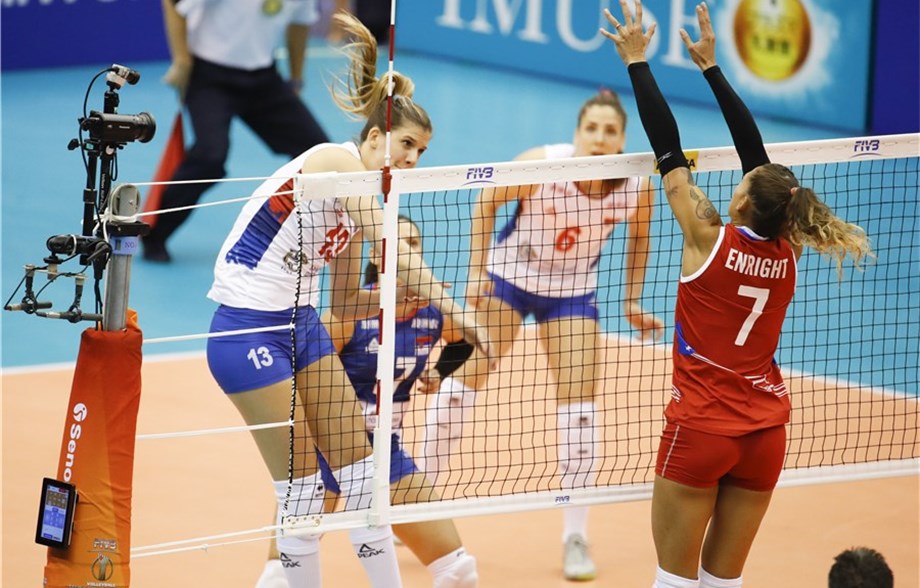 Pool D continued its trend of sweeps on the final day of preliminary round action at the FIVB Women's World Championships with Serbia, the Dominican Republic and Brazil coming up victorious.  Current Photo via FIVB

All 15 matches in the group came via 3-0 decisions. In the end, Serbia, Brazil, the Dominican Republic and Puerto Rico finished in the top four positions to claim spots in the second round.

Serbia and Brazil had already punched their tickets. The Dominican Republic claimed its spot with the win, finishing third at 3-2. Despite the loss to Serbia, Puerto Rico was in at No. 4 thanks to the DR’s win over Kenya.

The four advancing Pool D teams will merge with the top four out of Pool A to form Pool E in the second round. Action is set to begin Sunday in Nagoya, Japan.

“I tried to give a chance to the players today,” Serbian coach Zoran Terzic said. “I can say I’m satisfied with the 3-0 victory. Those who played today showed they deserved the chance to be here. I know that I can count on them for the rest of the tournament.”

Even with Brankica Mihajlovic and Tijana Boskovic watching from the bench, Serbia breezed past Puerto Rico in straight sets to remain perfect in pool play at 5-0.

Ana Bjelica took the starring role for the Serbians with 19 points (18 kills, 1 block). Tijana Malesevic and Bojana Milenkovic added seven points apiece, turning in three and two blocks respectively. Milenkovic exited in set 2 with a potential knee injury with Bianka Busa taking over and managing four points, all on kills.

Daly Santana led the Puerto Rican attack with 18 points, all on kills, while Stephanie Enright followed with 13 putaways. Karina Ocasio chipped in 11 points on seven kills and a team-leading two blocks and two aces.

A 6-0 run gave the Serbians a nice cushion to start Set 3 and they would need it. Trailing 13-8, Puerto Rico charged back to tie it up at 18 with help from Serbian miscues. The NORCECA side took a 20-19 lead, but Serbia had the first set-point try at 24-23. Puerto Rico knotted the score at 24. Serbia won the match on its fourth match-point try as Bjelica put up a final stuff.

“This was our best performance in five days here,” Puerto Rican coach Jose Mieles said. “Unfortunately we could not win. We have to see the result of the Dominican Republic-Kenya match next to find out if we advance to the second round.”

“We are very happy with the result; not just for the three points, but also for the form we showed today,” Dominican coach Marcos Kwiek said. “We had focus and were aggressive. We have to concentrate on the next round now. I hope Kenya will be a better team with practice and experience.”

The Dominican Republic was just too much to handle for Kenya on Thursday, nearly putting up three times as many kills and crushing the African side with 16 aces.

Yonkaira Pena Isabel notched 17 points for the DR, serving up nine aces to go with seven kills and a block. Lisvel Mejia and Brayelin Martinez added 12 points apiece. Martinez put down a team-best nine kills and added two aces and a block, while Mejia tacked on eight kills, three blocks and an ace.

Kenya played 13 of its 14 players in the match, but could not find an answer. Substitutes Leonida Kasaya and Sharon Chepchumba led the way with five points apiece. Chepchumba downed five kills, starting the final two sets, while Kasaya posted four kills and an ace, starting just the final stanza.

The Dominicans sprinted out of the gates to an 8-3 lead in Set 1 and continued a dominating effort to a 25-5 win.

The teams split the first 14 points of Set 3, before the Dominican Republic broke away with a 4-0 run and led by five 16-11 at the second technical timeout. An ace by Pena Isabel, the DR’s 16th of the match, sewed up the 25-15 win.

“They played a super game,” Kenyan captain Mercy Moim said. “We played our best but they destroyed our reception. They are very tall and play well.”

“We are happy to end with a win in this fashion,” Brazilian coach Jose Guimaraes said. “We were able to utilize all of our players in this round. I was worried about this game because we have different styles. You never know. We now will prepare for our next match. We may play Germany or Japan.”

Kazakhstan had already been eliminated from contention, but still put up a fight against Brazil, which opted to play some of its starters despite already sewing up a spot in the second round on Wednesday.

The Kazakhs boasted a brief 12-10 lead in Set 2 after an ace by Tatko. The Brazilians scored five in a row after a timeout to take the lead. A block by Rosamaria Montibeller made it 20-16 Brazil en route to a 25-20 victory.

The Brazilians cruised to a 7-1 lead in Set 3 and never allowed Kazakhstan closer than four the rest of the way (8-4). A tip shot by Natalia Pereira capped the 25-13 win and the sweep.

“We are glad to have a nice game against a top team in the world like Brazil,” Kazakh coach Shapran Vyacheslav said. “I want to thank the Japanese fans for their warm support. I want to come back again with a team that is more competitive.”