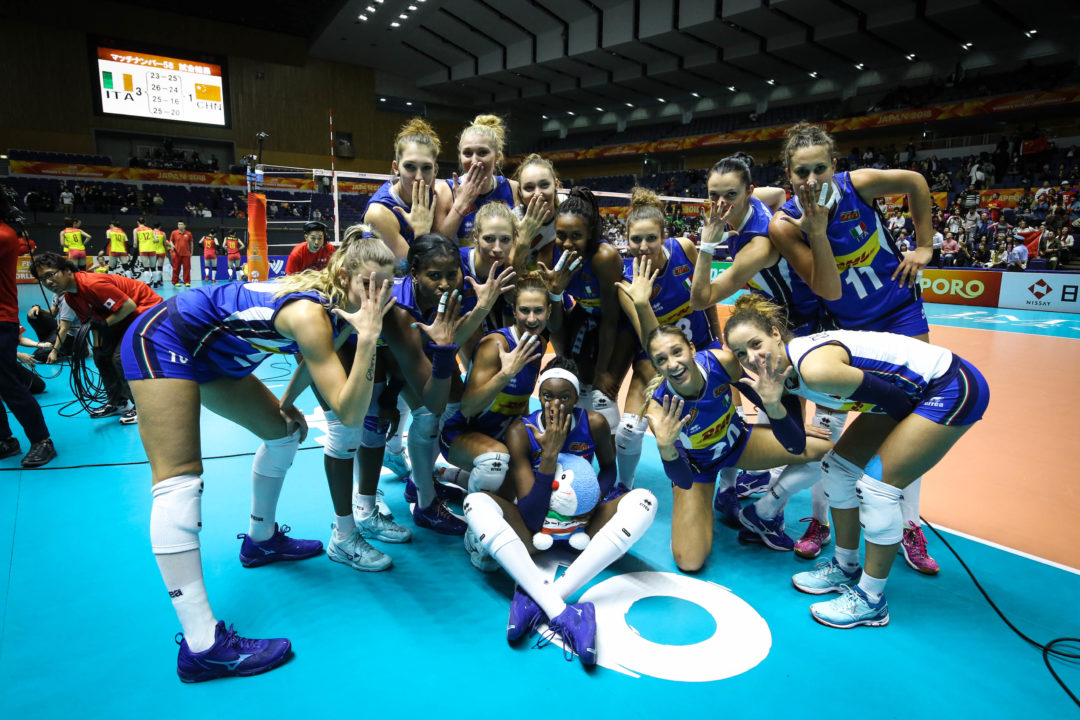 7th-ranked Italy rallied all the way back for a 3-1 upset victory after dropping the opening set to top-ranked China. The Italians complete pool play with a perfect 5-0 mark, while the Chinese drop to 4-1 heading to the second round of FIVB World Championship action. Current Photo via FIVB

After dropping the opening set, 7th-ranked Italy rattled off 3-straight wins to claim the 3-1 team result and topple top-ranked China Thursday night. With the win, the Italians head into the second round with a perfect 5-0 mark, while the Chinese sit at 4-1 following pool play.

“I’m satisfied with today’s result,” Italy head coach Davide Mazzanti said. “It’s a good step forward. In the first set, the players were a little bit nervous, but from the second set I had the players play freely. We knew all about the China team and their abilities, so we tried to serve strong and we were able to focus on the game and this helped us to win. It’s important for us to keep this attitude and playing style and to keep our concentration.”

Italy was dominant on the block, outdoing China 19 to 9, and at the service line, notching 8 aces to China’s 4. The Chinese committed 22 errors, while the Italians limited their total to 10.

17th-ranked Bulgaria sent 19th-ranked Canada packing and shored up a second round appearance with a 3-1 victory Thursday night inside Hokkaido Prefectural Sports Center. It was a pretty even performance, as each team registered 7 blocks and 8 service aces.

“Today was a good day for us and it was a good match,” Bulgaria head coach Ivan Petkov said. “After this match we can go to the next round and this was our initial target. It was hard for our team after playing a very hard match against China yesterday. We lost then but when you win you are happy. Now we must think of our first match in the next round.”

12th-ranked Turkey handed 25th-ranked Cuba its 12th consecutive World Championship loss in 4 sets Thursday night to close out pool play. After going up 2 games to none, the Cubans rallied to take the 3rd set before Turkey could close it out with a win in the 4th.

“We did our job and won the match with three points, but I’m not happy with the way we played in the third set,” Turkey head coach Giovanni Guidetti said. “But now we’re looking forward to Osaka. I was happy with the way the team played against Canada and Bulgaria; we played consistently and well. I believe we could have fought more against Italy and China, even if they are better than us. We could have given them more trouble. We need to improve our block, attack and defense.”

Final Pool B Standings and Results: