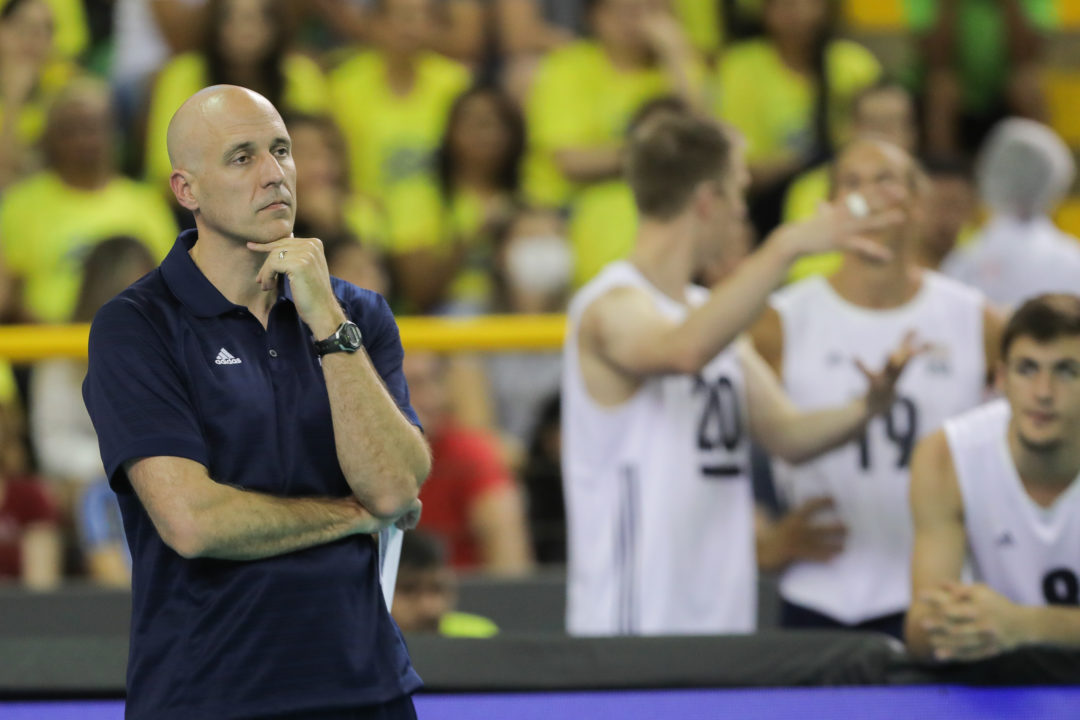 The Americans had a 2-0 lead in the match, but wound up losing in a tie-breaker. Current Photo via FIVB

The Brazilians handed Team USA their first loss of the 2018 FIVB Men’s Volleyball Nations League on Sunday by taking a page out of the stars-and-stripes playbook.

On Friday, the United States fought back from an 0-2 deficit to win a tie-breaker over Japan; on Sunday, Brazil did the same thing to them, winning the last 3 sets to jump to 2nd in the table.

With the tie-breaking set pushing past 15, it was an 8th point and an ace from Isac Santos, who didn’t start the match but subbed in for Mauricio Souza in the 2nd set, that sealed the comeback for Brazil.

The U.S. jumped ahead early with a strong serve-and-block game, taking advantage of struggles in receipt by Brazil’s Felipe Fonteles.

Brazil was led in scoring by the ever-consistent Wallace Souza, who had 21 points on 18 kills, 2 blocks, and 1 ace (48.6% hitting). Then, outside hitter Mauricio Silva came alive late with his most complete match of the tournament so far. He scored 20 points, his best output of the Nations League, on 13 kills, a match-high 5 points, and 2 service aces.

That support is what Brazil, playing without the injured Lucarelli, has been looking for this tournament.

Veteran spiker Matthew Anderson, playing most of the match at opposite, led Team USA with 23 points on 22 kills and 1 ace. He hit 56% in the match. As American coach John Speraw saw the day slipping away, he slid Anderson to outside hitter in the 5th set, where Anderson typically plays as a pro, in place of Aaron Russell. He then brought in the dynamic, but inexperienced, Ben Patch at opposite – and Patch responded, with 5 kills on 5 swings in the set.

The Americans continue to tinker with their lineup, and may have found the balance in the 5th set, in spite of the loss, at least at the spiker position.

The Americans continue to give up a lot of points on errors – Brazil scored 40 on American errors, which is almost as many as they scored on their own spikes (53). After their serves improved in week 1, with some matches still to be played on Sunday, the Americans are back into position with the most errors of all teams in the tournament with 132 through 6 matches (22/game).