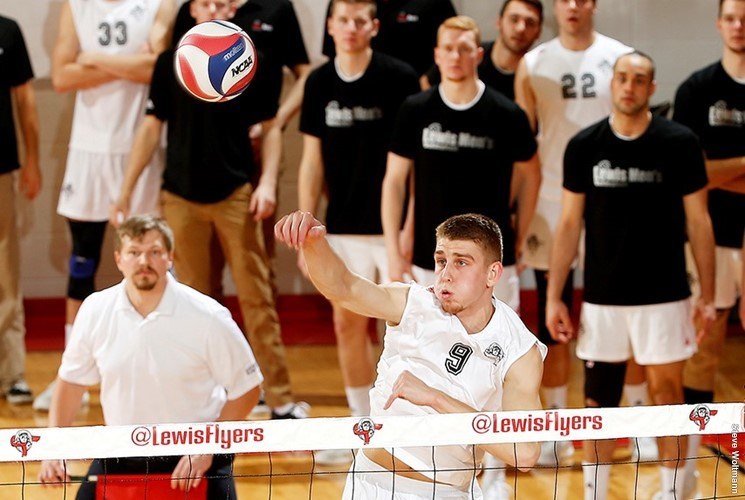 Ball State’s Brendan Durane had a team-high of 17 kills while Matt Szews hit a double-double of 14 kills and 10 digs and also added 4 blocks in the match. Ball State had a total of 51 kills as a team but only hit .198 while Lewis had a total of 52 kills but hit .316.

With the win, Lewis improves to 10-3 on the campaign and 5-2 in MIVA action, while the Cardinals fall to 11-3 overall and 3-2 in conference play.

Lewis returns to action on Saturday (Feb. 18), as the Flyers welcome Fort Wayne to Neil Carey Arena for a 7 PM first serve.

The Cardinals started off the night strong and took the opening set, 27-25. The teams were tied 25-25 before Matt Szews and Brendan Surane each knocked down a kill to seal the set one victory. As a team, Ball State tallied 13 kills and 10 block assists.

In set two, both teams knocked down 13 kills, but the Flyers’ .379 hitting percentage led them to a 25-21 win. Both Szews and Surane had a team high four kills in the second set.

Lewis boasted an impressive .458 hitting percentage in the third set and took the set 25-17. The Cardinals were able to knock down 14 kills, five by Szews and five by Surane.

In the closing set, Ball State and Lewis were tied 11-11 before the Flyers scored six straight points. Surane led the way with four kills while freshman Blake Reardon added three.