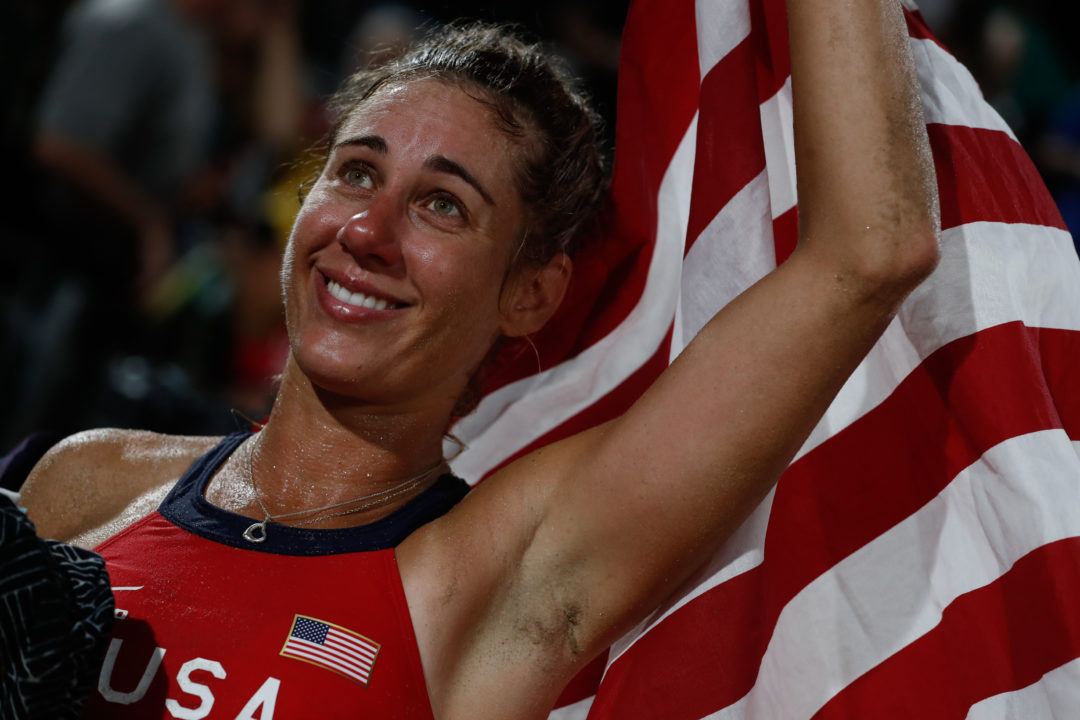 April Ross announced she is teaming up with Stanford alum Alex Klineman for the 2018 pro season and the next Olympic training quad.  Archive Photo via Agencia Brazil

On the Nov. 29 Sandcast podcast with Tri Bourne and Travis Mewhirter, pro beach star April Ross revealed her new partner ahead of the 2018 pro season and training for the 2020 Toyko Olympics.

After nearly 40 minutes minute conversation of chatter rangeing from how she needs to adjust her training schedule to avoid being “fried” and how she determined her goals moving forward, Ross discussed what brought her to team up with new partner Alex Klineman, the AVP 2017 Rookie of the Year.

“I feel ridiculous that I have this choice,” Ross said of the partner selection process. “I thought my choices were limited. But as the Hague signup deadline got closer, a couple of people approached me and say ‘if you want to play, let me know.’I was really flattered and kind of shocked that people were so interested in playing with me. I don’t take it lightly and if anybody wants to play with me I think that is amazing.

“I trained with a couple of people and it came down to really just some intangible things. I decided to go with Alex Klineman, to take a shot at Toyko with her.”

Ross said it was the mentality, competitiveness and indoor background in addition to Klineman’s size that attracted her to her new partner, who was the 2006 Gatorade National Player of the Year and went on to be a four-time All-American at Stanford (2007-10) before playing professionally in Brazil and Italy.

“I could just tell from training with her – she comes from an indoor background, which I know not many players have that anymore – and just has that really disciplined mentality and the way she trains is just very focused and very intense,” Ross said. “She understands the importance of practice and coming to win in practice. Something about playing indoor is pretty cutthroat and then playing in Brazil for so long, you have to step up your game and be really good and want to win. I think her always coming with that competitive mentality was a big intangible for me, because I feel like in my career I have gotten some victories just purely out of my determination to win. I see a little bit of that in her and then her physcial ability. I watched her a little bit and, after one season on the beach, she was picking up some really good things and was alot quicker than I expected her to be. She is pretty quick twitch for being 6-5.”

Ross went on to point out that she has a shared chip on her shoulder with Klineman.

“She could keep playing indoor and make a lot of money, but she is out here on the beach because she wants to go to the Olympics and she has something to prove,” Ross said. “I like that being part of her motivation.”

Earlier in the podcast, Ross talked about her training approach, Ross mentioned the tricky balance of pushing herself and training smart.

“By the time I got to Rio, I was burnt out and took a year and let loose a little bit because I was so fried,” she said. “I want to learn from that because I don’t want it to happen again. And I am going so hard right now, I am like April went are you going to take a break and let off the gas a little bit. It is a huge balancing act. That is one thing I have learned throughout my career is that I can get really gnarly and really intense, which is why I think I have had so much success, butI think there is a way to train smart and enjoy the journey a litlte more and still maximize what you are doing.”

Finding a balance is key with the FIVB season beginning in January and her fourth international quad coming up, leading into Tokyo.

“I had to have some discussions with myself going forward, am I just trying to be good and play internationally and just continue my career and do the best that I can or am I in this because I want to go to Tokyo and get that gold that has alluded me for two quads now,” Ross said. “Am I in this for a career or is this still a dream? I decided this is me chasing my dream. I haven’t got it yet. I am going to be all in so that standard is still there for me. I know what I need to do, I know what it takes at that level. It gives me renewed energy, but I feel like it is going to be a struggle.”

She also mentioned she plans to watch more video this year, improve her technique and work on her breathing to improve her game.

A bonus note in the podcast was Bourne talking about the autoimmune disease that kept him out for much of the 2017 season, one that has kept him from training other than his mental game to this point.

“For me it was going super hard and then being kind of an idiot and eating like crap and partying a little bit and drinking a little bit,” Bourne shared. “Part of me thinks that is what sent my body into shock with this whole autoimmune thing I am dealing with. I went really hard with really intense stress and pressure I didn’t realize I was putting on myself and then the physical stress of 20 events in 12 countries and then I went straight into ankle surgery so throw antibiotics and anesthesia in my system and it just fully threw me out of whack.”

I think April choosing to play with Alix has some interesting similarities to Misty choosing to partner with Kerri. I honestly believe we could be seeing the beginning of the most dominant team in women’s sand volleyball for the next several years.
Alix is only 26 and April has the killer work ethic and focus to drive hard for as long as she wants. It’s amazing what they accomplished at the Hague and I’m super stoked to watch them continue to grow throughout this next AVP season on their way to Tokyo. Can’t wait for AVP in NYC.