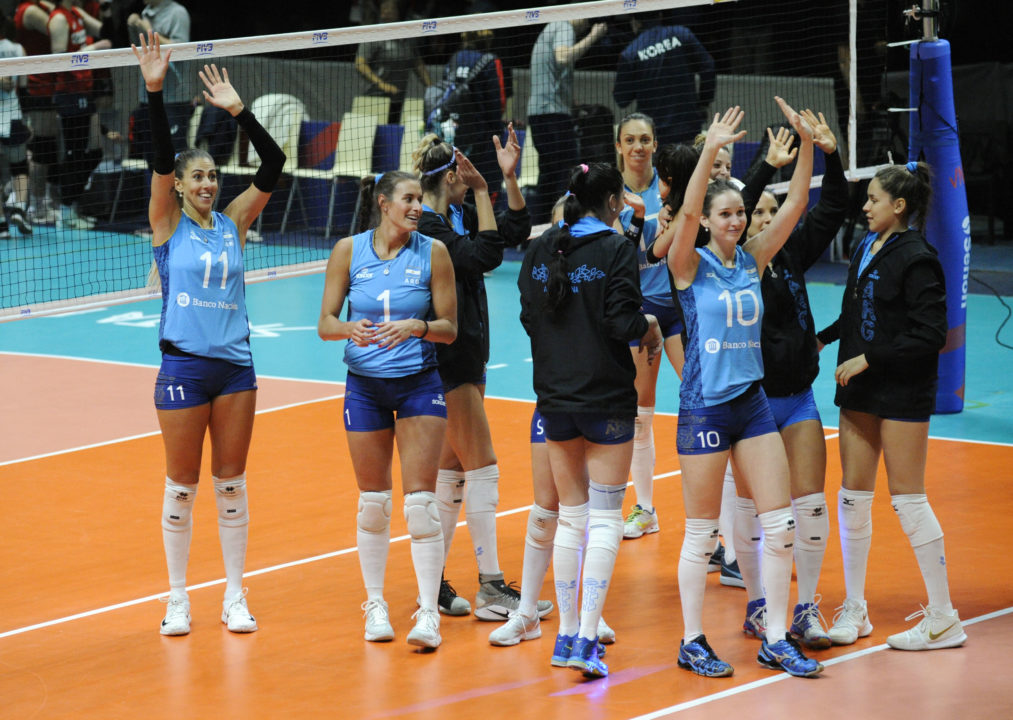 Argentina finally broke through into the win column with a home sweep of South Korea at home in Santa Fe on Tuesday.  Current Photo via FIVB

Argentina finally broke through into the win column with a home sweep of South Korea at home in Santa Fe on Tuesday.

“For us it was a very tough game and we were losing all the games but to win at home is great and we are so happy,” top scorer Paula Nizetech said. “We were patient and served really well. We are so happy.”

The Argentines racked up 11 aces, while allowing three, and boasted a 44-31 lead in kills in the match. Korea edged the home side in blocks (6-5) and earned five extra points on errors (22-17).

Five double-digit scoring efforts lifted the Argentines to victory, led by Paula Nizetich‘s 14 points, all on kills. Anahi Tosi (11), Julieta Lazcano (11), Antonela Fortuna (10) and Agnes Tosi (10), all starters, rounded out the group. Anahi Tosi downed nine kills and added a block and an ace, while Lazcano tacked on seven kills, three aces and a block. Fortuna served up a team-best four aces to go with six putaways. Agnes Tosi put up a team-high three blocks on top of seven kills.

The win kept Argentina from tying the world record for successive losses at the world level.

Argentina outdid Korea 14-10 in kills in the opening set, earning its first ever set victory over its foe on the world stage.

The Argentines went up 4-0 in Set 2 behind tough blocking an strong serving from Lazcano. Korea knotted the score at 21, but miscues helped Argentina secure the extra-point victory.

Korea worked its way to a 15-12 lead in Set 3, but Fortuna came through in the clutch to help lift the home team to its first VNL victory.