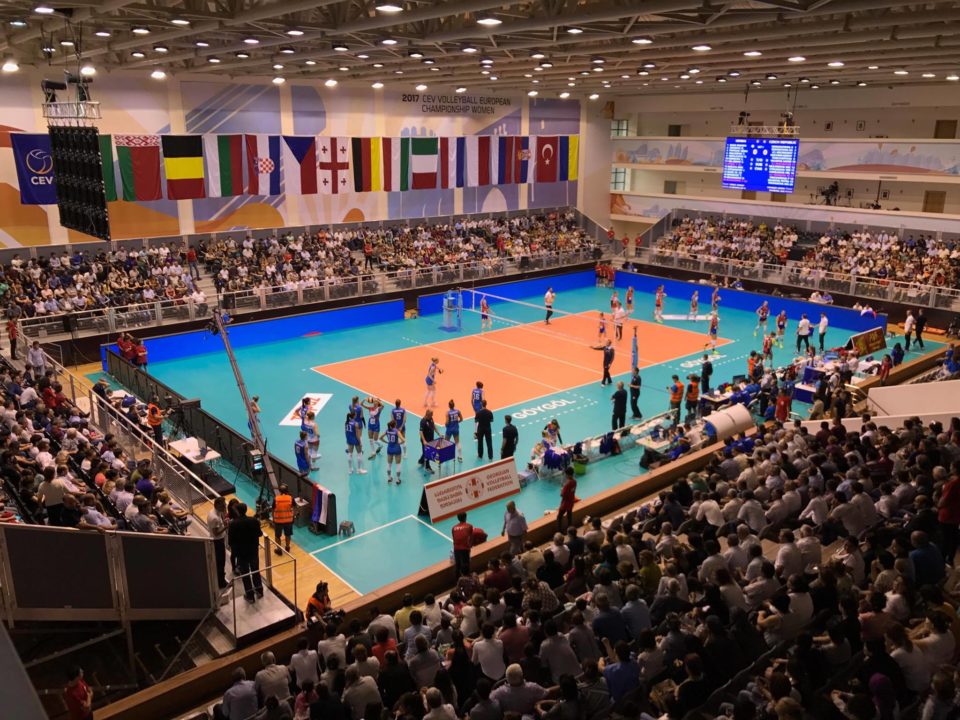 Who will advance to EuroVolley's semifinals? Current Photo via CEV

Finally, Women’s 2017 EuroVolley reaches its most exciting stage with the start of the knockout phase. Only the continent’s top eight teams remain standing. From today up until October 1st, every game will be an elimination game, a true battle. Today, we aware you on the quarterfinals matches, with our picks on who is going to advance, and player match-ups to look out for.

These teams were ranked 1 and 2 in Volleymob’s EuroVolley Power Tankings, respectively. Thus, what a pity to see such an amazing game this early into the playoffs.

Italy recently narrowly missed out on gold at the 2017 World Grand Prix after losing to Brazil in the finals, so you know it is hungry for a title. Its squad had the easiest route to the semifinals of any major team in the tournament and finished first in Pool B with wins against Belarus, Croatia, and Georgia.

The Netherlands are the tournament’s current silver medalists, having come up short against Russia in the last edition, a result it also experienced in 2009. It finished second in Pool D with 2 wins, against the Czech Republic and Belgium, and one loss, against Serbia. It then beat Croatia in the playoffs to advance on to the quarterfinals.

The Netherlands has a strong case to put on a very competitive game against Italy. Its roster is basically at full strength, and it has played worthier opponents than Italy in Pool play, in addition to an extra playoff game, which gave them extra time to settle whatever chemistry issues may have appeared throughout the tournament. Also, it effortlessly beat Croatia in the playoffs, a team that went up 2-0 against Italy in Pool Play. Meanwhile, Italy is without two starters Miriam Sylla, who was recently tagged in a doping accusation, and setter Ofelia Malinov, who fractured her right ankle.

However, this is an elimination game, and we expect Italy to be much more concentrated than it was in its pool games against bad competition. Italy just has more firepower in their squad, with the likes of Paola Egonu and Christina Chirichella to not put up a very good fight. Its key for success will be to maintain its impeccable servicing, which leads the tournament at 2.6 aces per set. This stat is relevant, as The Netherlands boasts the worst receiving line of the tournament, tied with Serbia at only 33% efficiency. If Italy plays disciplined volleyball, it should be enough for it to advance.

Both teams’ success will rest on their star outside hitters, Paola Egonu and Lonneke Sloetjes. Egonu is averaging a ridiculous 6.33 points per set on 55% hitting efficiency, while also dropping 0.75 aces per set. Sloetjes, who won last tournament’s best outside hitter award, is averaging a slightly less 4.21 points per set, but as the more experienced player, rarely faults in decisive moments.

While, despite all its injuries, we had the current Olympic silver medalists ranked third in our EuroVolley Power rankings, nobody could have predicted Belarus to be in this spot. Or could we? After all, they did have a Cinderella run earlier this year in FIVB’s Girls’ U18 World Championships.

In pool play, Serbia lost only one set in its wins against Belgium, The Netherlands, and The Czech Republic, finishing first in Pool D. Belarus won against Croatia and Georgia, and dropped their game to Italy, finishing second in Pool B and beating the Czech Republic on the playoffs to advance on to the quarterfinals.

Serbia won a bronze medal at the World Grand Prix earlier this year by winning 3-1 against China in Nanjing, the same team that denied them gold at the Rio 2016 Olympic Games as they took silver. Even though its squad is without seven players, including its two usual setters, Serbia can never be counted out, as coincidentally, they were also missing seven players in their historic silver medal run in Rio.

The Serbian side is the clear favorite in this one, as its roster just has too much firepower and Belarus’s squad is very inexperienced. Even though Serbia is the worst passing team in the tournament, tied with the Netherlands at only 33% efficiency, it did win an Olympic silver medal with horrible passing. Belarus’s only chance in this game is to somehow serve their way into an upset and defend their hearts out, as they do have a 2.6 to 1.9 blocks/set over their opponents. But let’s not forget that Serbia easily swept The Czech Republic in three sets during pool play, the same team that took Belarus to five sets on the playoffs.

This game’s most interesting match up will be Serbia’s offensive juggernaut Tijana Boskovic against Belarus’s star middle blocker Anzhelika Barysevich. While Boskovic is averaging an amazing 7.5 points per set on 56.4% spiking efficiency, she will have to go through Barysevich’s efficient defense, which is netting 3 blocks per game, including six against Italy, at a 0.7 blocks per set efficient. She has also been able to contribute on offense, scoring in double figures in all of her team’s games.

This game will be a rematch from their battle in pool play, which Russia won 3-1 (23-25, 25-20, 23-25, 20-25). We expect their second encounter to be very intriguing. Russia has been able to overcome its coaching change only hours before the tournament to win all of its three pool matches. However, it did so in ugly fashion, as it needed 5 sets to beat both Ukraine and Bulgaria, low ranking European squads. Turkey was not better, as in addition to its loss to Russia in pool play, it also lost to Bulgaria, before recovering against Ukraine and beating Poland in the playoffs to reach the quarterfinals.

Turkey is playing in a recovering effort, slowly adapting to its competitors. If Russia expects another easy win against them, they will have to serve better. Turkey has the best reception of the tournament, at 45% efficiency, while the Russian are the worst servers, at only 0.8 aces per set. Also, Russia’s blocking will have to continue to work exceptionally, as they are currently leading the tournament at 3.8 stuffs per set. However, Turkey’s Naz Aydemir is unlike any setter Ukraine and Bulgaria threw against the Russian block. If she plays well, Turkey has a chance. If not, Turkey’s recovering play will hit a roadblock, as they will suffer their second loss to the Russians in this year’s Eurovolley.

Both team’s outside hitters are having superb performances in the tournament. Tatiana Kosheleva, last edition’s MVP, is averaging 7.3 points per set on 50.4% spiking efficiency. Neriman Ozsoy‘s numbers are not quite as high, but still at a respectable 4.35 points per set on 40% spiking efficiency. However, she did perform better than Kosheleva in their pool match up, scoring 29 points in 52 attacks, while Kosheleva had 18.

This will be a rematch of their Pool A encounter earlier in the week. Hosts Azerbaijan is the feel good story of the tournament. While Germany is coming off a third place finish at the FIVB World Grand Prix this summer, the Azeri squad was having a very quiet year, and nobody expected them to sweep pool play on the first round, specially after their last place pool finish in 2015.

In their earlier match-up, Azerbaijan took the game 3-1. That was the only set Azerbaijan lost in the tournament so far, after beating Poland and Hungary in straight sets. Meanwhile, Germany dropped its game against Poland, in addition to their loss to the Azeri, and only made it to the quarterfinals because of their win against Hungary, which allowed them to face and beat Bulgaria in the playoffs.

Their pool match up was very one sided, with a relatively easy Azeri win. If Germany hopes for a different result this time around, it will have to do their best to stop Azerbaijan’s offensive game, which is the most efficient of the tournament so far, at a 39% success rate.

Azerbaijan will not surrender the chance to go to a semifinals in its home soil. They will win 3-0.

Both Azerbaijan and Germany are playing behind scoring machines. Polina Rahimova is putting on a master class for the host team, greatly helping her case to be recognized as one of the premier outside hitters in the world, averaging 7.3 points per set on 50.41% spiking efficiency while also averaging 0.6 aces per set. She is the tournament’s 4th best server, but did commit 5 serving mistakes against Germany in their pool round play. Germany’s Louisa Lippman‘s numbers are a not as impressive but still very respectable at 4.5 points per set, but she did have the better performance in their pool match up, with 26 points in 61% spiking efficiency, to Rahimova’s 20 points on 42% efficiency.