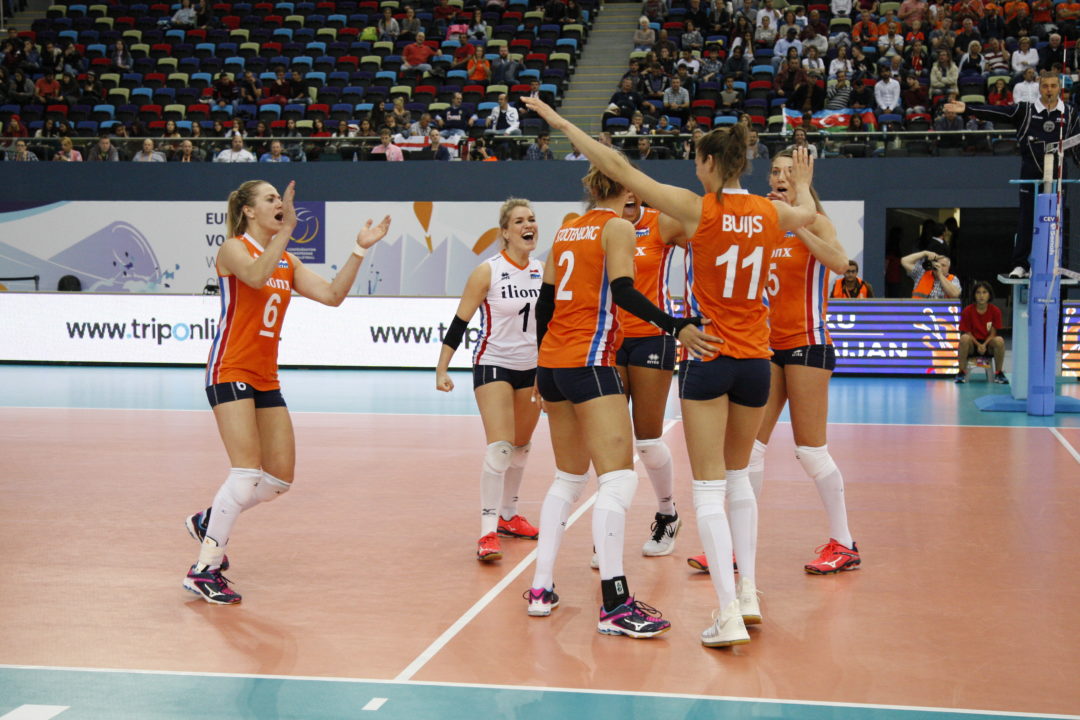 The Dutch squad upset Italy with a very one sided 3-0 win behind another Lonneke Slöetjes's gem performance. Serbia did its homework and ended Belarus's surprising Euro run. Current Photo via CEV

The Netherlands defied all expectations and completely stunned Italy 3-0 in dominating fashion. These teams were ranked 1 and 2 in Volleymob’s EuroVolley Power Tankings, respectively. Thus, such a one sided game was a real surprise.

The Netherlands had continuity in their side, as its roster is basically at full strength, and it played worthier opponents than Italy in Pool play, in addition to an extra playoff game, which gave them extra time to settle whatever chemistry issues may have been appeared throughout the tournament. Italy, on the other hand, fought roster absences during its whole season, and wasn’t tested at all during pool play.

Meanwhile, Serbia’s 3-0 win against Belarus was already expected. Even though its roster is injury ridden, Serbia can never be counted out, as its squad has a history of overcoming bad odds and coming out on top.

The Netherlands routed Italy 3-0 (25-17, 25-20, 25-13) to open the programme of the 2017 women’s EuroVolley quarterfinals at the National Gymnastics Arena in Baku – and qualify for their second straight European Championship semi-final where they will play the winners of the match-up featuring hosts Azerbaijan and Germany. As for Italy, their below-par performance means that the country’s medal drought at the European Championship continues – their last podium finish to date being the gold medal they won in 2009. The result of today’s match reflects what the Netherlands did last year in the pool stage of the Rio 2016 Olympics – before they finished that tournament in fourth place.

Lonneke Slöetjes produced a first Dutch lead – and quite surprisingly, she did not do so at the net but while standing behind the service line (7-2) and with middle blocker Robin Kruijf in their starting line-up after recovering from injury, the ‘Oranjes’ looked extremely confident as they set the tempo of the match (9-4). Italy finally seemed to find their rhythm as they closed in with Paola Egonu causing much of the damage (9-8). However, as the ‘Azzurre’ were a step away from completing their comeback, they started making too many mistakes whereas the Netherlands pushed with all of their weapons – and especially with Slöetjes and Anne Buijs – to restore their comfortable leadership in the match (18-12). On the other side of the net, a lack of consistency prevented Italy from performing to the best of their abilities and the first set soon ended with the Netherlands cashing it at a canter (25-17).

Italy were off to a disastrous start to the second set where they trailed 1-8 in no time despite a few changes made by coach Davide Mazzanti who replaced setter Alessia Orro and middle blocker Raphaela Folie with Carlotta Cambi and Sara Bonifacio, respectively. Even though Italy improved their performance in some elements of the game, the Netherlands had too much depth and quality on their side to feel any threat – and stormed to a 7-point advantage at the second technical timeout. The ‘Oranjes’ had some sort of a blackout as Italy scored four points in a row to close in from 20-11 to 20-15. The match was growing in intensity as Cambi finished a spectacular rally before Dutch team captain Maret Grothues stopped her side’s negative streak. The Netherlands were only two points away from doubling their lead in the match (23-20) as the game was finally living up to everyone’s expectations – and de Kruijf eventually made this happen (25-20).

Italy took some of the energy they had displayed towards the end of the second set into the third one, claiming an early lead before Buijs levelled the count at 4-4. The Italian hopes of a comeback were short lived as the Netherlands soon rallied to a 12-7 lead with Buijs being their most prolific scorer as in their previous matchup with Croatia (16-9). Italy were paying a high price for the absence of their injured main setter Ofelia Malinov and as Buijs scored from every possible angle, the Netherlands deservedly cruised to a compelling 3-0 victory.

“It is obviously a big disappointment for us. I do not want to search for excuses, but our stability was somehow gone after Ofelia Malinov‘s injury. It was a big blow not only for the player herself, who was injured, but also for the team as a whole. We have had to re-build almost everything again from scratch since all of the things we had worked on for the whole summer were somehow gone. I am nevertheless very optimistic about the future of this team.” Lucia Bosetti, player of Italy

“We failed, of course, but compared to the World Grand Prix where we finished in second place, there has been a couple of major changes to our team. As a result, we have had to change the way we play – and against a team as organised as the Netherlands are, you only stand a chance if you show quality and consistency with your middle blockers and outside hitters, which is something we definitely were not able to do today. We will take our lessons and re-start from here, since this loss does not erase everything we achieved this season – from the qualification to the World Championship to our silver medal from the World Grand Prix Finals.” Davide Mazzanti, coach of Italy

“I think we did a very good job. We played really clean Volleyball – we didn’t make a lot of mistakes, we served well, felt good on the court and celebrated every point. It was an easy win. I do not want to say anything about the next game because I will jinx it. We will watch the matches and we will be prepared – we’ll see.” Lonneke Slöetjes, player of the Netherlands

Yesssss!!! This feels good! 3-0 win against Italy so that means we're in the semi's of European Championships! Lekker meiden💪💥 #EuroVolleyW

“This was a very convincing win. I said before that this team would continue to get better. We will find a thing or two also in this match to improve on for the semi-final and the final. I respect Team Italy a lot. It probably was not their best night, but we did not let them to be good – we took care of what we needed to take care of. We were the team that we wanted to be, that we have talked about, so I’m proud of my girls for going out there and doing a good job. We had a really good game plan coming in. They don’t have a lot of weaknesses, but we found a few and went after them, so I’m happy with the result of that process, not just with the score.” Jamie Morrison, head coach of the Netherlands

Rio 2016 Olympic silver medalists Serbia emulated what the Netherlands had done earlier in the afternoon while playing Italy – as they dispatched Belarus in consecutive sets (25-19, 25-12, 25-14) to secure their spot in the 2017 women’s EuroVolley semis where they will be playing the winners of Friday’s highly anticipated match-up between Russia and Turkey. Belarus could never pose a real threat to the powerful players from Serbia – who look determined to improve on the bronze medal they won two years ago in Rotterdam.

Belarus were definitely the underdogs going into the match – the first-ever between the former Soviet Republic and Serbia at any major Volleyball competition. They certainly had a mountain to climb as they took on last year’s Olympic silver medalists but they played with much courage, thus keeping the score close for most of the opening set. As this had literally changed the course of their previous game with the Czech Republic, Belarus coach Piotr Khilko decided Anastasiya Harelik would be his side’s opposite hitter again but as the match progressed, Serbia slowly stretched their lead (17-11). The bronze medal winners from the 2015 women’s EuroVolley were able to hold on to this advantage and eventually rallied to a 25-19 win.

The second set followed a similar plot – with Serbia slowly but surely imposing their rule as their main assets – Brankica Mihajlovic and Tijana Boskovic – unleashed their power to propel their team to a massive 22-11 lead. It did not last long until Boskovic spiked yet another time to seal a 25-12 victory for what looked an easy ride for Team Serbia.

Belarus were hoping to surge back as they had done in their previous match-ups with Croatia in Tbilisi and Czech Republic the other day in Baku, but the opponent standing on the other side of the net was a much tougher one this time around. With Serbia leading 6-1 early in the third set, that scenario was not much likely to materialize. Serbia’s quality was simply too much for Belarus (17-10) and the players coached by Khilko rapidly had to realize they had to be content with equaling their best result at the European Championship since 1995 – and by finishing among the top eight, with securing their participation in the 2019 edition co-hosted by Turkey, Poland, Hungary and Czech Republic.

“Obviously we knew we were playing the silver medal winners from last year’s Olympics and were aware that they were the heavy favourites going into this match. However, we wanted to fight and show our level and character – and unfortunately, we did not quite succeed in doing so. Obviously there is quite a difference between these two teams at this very moment.” Aksana Kavalchuk, team captain of Belarus

“We played with a big heart but Serbia was really good. After the first set, we tried to change the situation and made some changes to the initial starting six. However, Serbia’s attack was very effective. We are happy and satisfied with our results at this European Championship. We played for the first time in the quarterfinals and this is a happy moment for our team and our country. I want to congratulate Team Serbia and wish them all the best for the remainder of this tournament.” Piotr Khilko, head coach of Belarus

“At this moment Serbia is of course a better team than Belarus and we expected to win today. However, we saw some matches that Belarus played before in the tournament, especially against Croatia and Czech Republic, where they were losing 0-2 and eventually won 3-2. Therefore, we knew it could become dangerous if we did not play with full power. However, today we played good enough to win 3-0.” Zoran Terzic, head coach of Serbia