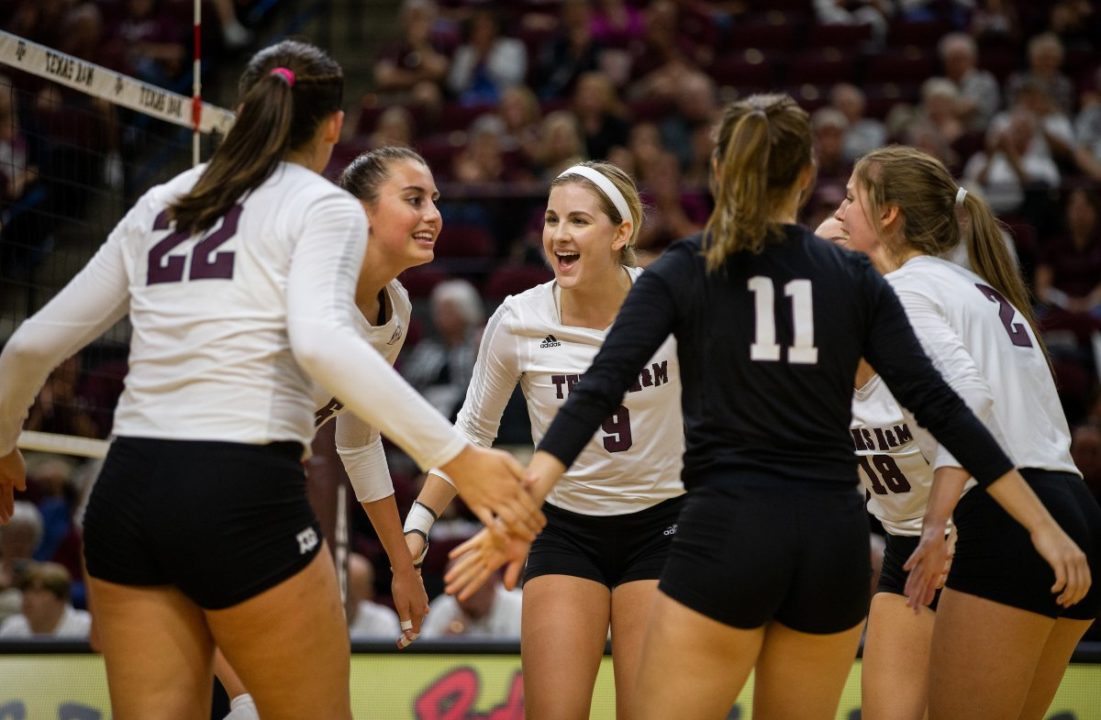 Texas A&M (6-3) closes out its non-conference slate this weekend as the Aggies compete in the OU Nike Invitational, Friday-Saturday at McCasland Field House in Norman, Oklahoma.  Current Photo via Texas A&M Athletics

COLLEGE STATION, Texas — Texas A&M (6-3) closes out its non-conference slate this weekend as the Aggies compete in the OU Nike Invitational, Friday-Saturday at McCasland Field House in Norman, Oklahoma. Texas A&M opens the tournament against the host Sooners on Friday at 7 p.m., and the match will be televised on Fox Sports Oklahoma.

The Aggies will play two matches on Saturday, facing Northwestern State at 11 a.m. and a re-match against Oklahoma at 5 p.m.

The complete tournament schedule is as follows:

Most recently Texas A&M won its own tournament but had to rely on a tiebreaker to be awarded the trophy after falling to a scrappy Missouri State team, 3-2 (11-25, 26-24, 15-25, 25-19, 15-11) last Friday to finish the Texas A&M Invitational tied with the Bears and Pepperdine with a 2-1 record. The Aggies, who were playing their first five-set match of the season, were presented the tournament trophy based on most sets won amongst the tied teams.

Oklahoma is 5-4 entering its home season debut after going 1-2 at the Colorado Invitational in Boulder, Colo. The Sooners, who defeated SEC-foe Georgia in five sets in Boulder, closed out the tournament with a 3-0 loss (25-12, 26-24, 25-15) against then-No. 24 Colorado.

The Aggies open SEC play next week, playing host to the Arkansas Razorbacks on Wednesday, Sept. 19 at Reed Arena. First serve is at 7 p.m., and the match will be televised nationally on SEC Network. Several promotions will be offered: