Bulgaria Punches Ticket to Round 2 with Sweep, Finland Tops Cuba in 4 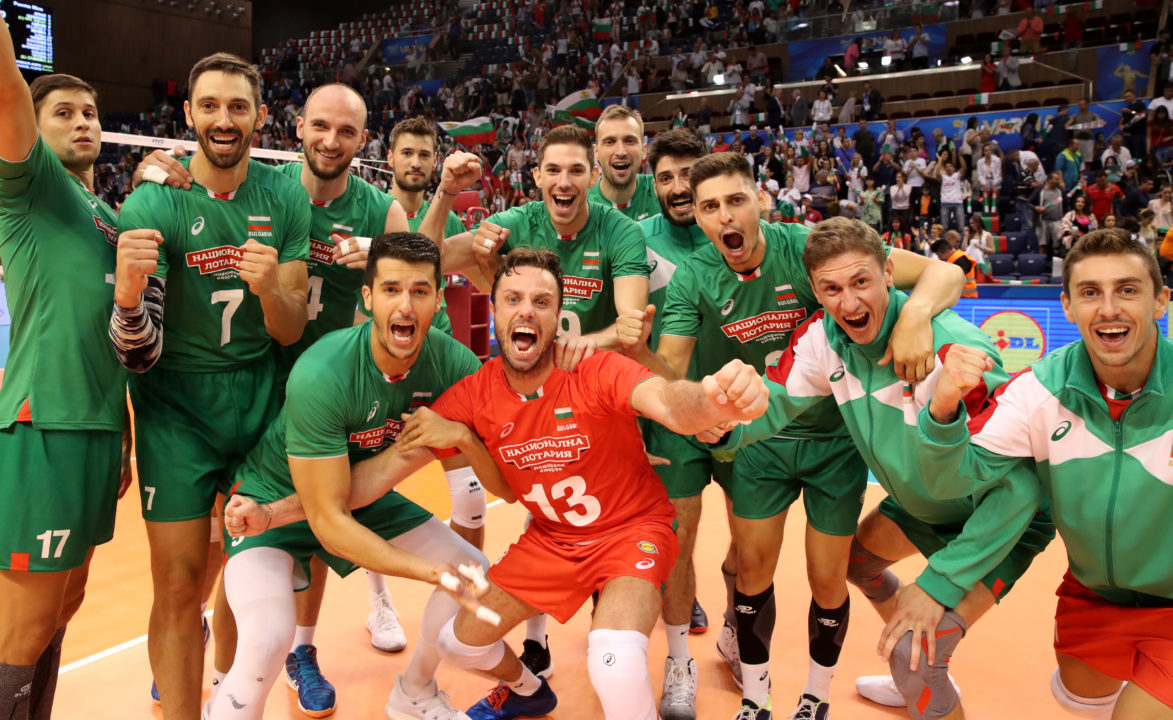 After opening the World Championships against host Bulgaria on Sunday, Finland had a couple of days to regroup and bounced back with a sweep of No. 16 Cuba. Meanwhile, Bulgaria moved to moved to 2-1 and secured its place in the second round with a dominant blocking effort (12-0) in a sweep of Puerto Rico.  Current Photo via FIVB

After opening the World Championships against host Bulgaria on Sunday, Finland had a couple of days to regroup and it seemingly did the team well as it bounced back with a sweep of No. 16 Cuba.

Meanwhile, Bulgaria moved to 2-1 and secured its place in the second round with a dominant blocking effort (12-0) in a sweep of Puerto Rico.

Markus Kaurto, who was listed as a libero on the Finland’s Sunday lineup sheet, made his offensive debut and led the way with 12 points alongside Urpo Sivula. The Finns opted to sit outside Antti Ronkainen and middle Tommi Siirila, instead going with Kaurto and outside Antti Makinen.

The change seems to have worked as head coach Tuomas Sammelvuo stuck with his starters throughout in the sweep.

“Once again, our fans were truly amazing and they did not stop supporting us through the whole game!,” Kaurto said. “We managed to play our style of Volleyball, pushed them with serves and destroyed their defense. On the other hand our blockers did great job on the net which also helped us a lot.”

Miguel Gutierrez notched a match-high 17 points on 14 kills, two blocks and an ace to lead Cuba. Osniel Melgarejo Hernandez added 11 points, all on kills, while Roamy Alonso chipped in nine points with four kills, a team-best four blocks and an ace.

Finland cruised to a 25-19 Set 2 win, allowing Cuba to tie it up on two occasions, but closing the door with a 63 percent hitting efficiency.

After falling 25-20 in Set 3, Finland recovered with an early 7-4 advantage in Set 4. Tervaportti served up seven straight points to give the Finns cushion in a 25-16 victory.

“We gave our best, we fought, we won a set, but probably we are not experienced enough to keep the high playing level during a whole match,” Cuban coach Niclas Coffigny said. “Now it is time for analysis and preparation for the next game against one of the leaders in our pool – the team of Iran.”

Puerto Rico utilized all 14 of its players, but could not find an answer for homestanding Bulgaria on Friday, falling in a sweep. The Bulgarian block posed the biggest issue, with 12 stuffs among 17 Puerto Rican errors.

“The most important thing was to get a 3-0 win and I am happy that we managed to do it with as less efforts as possible,” Bulgaria coach Plamen Konstantinov said. “I tried different playing variations and I am satisfied with the performance of some of the players who did not take part in the previous matches. I would like to congratulate Teodor Todorov and Svetoslav Gotsev for their great actions on the net. The team of Cuba is a dangerous opponent because they have some really potential players but on the other hand they are young and less experienced than us. We have to reduce to minimum our unforced errors in order to win easily and stay in the battle for the first places in our pool.”

Teodor Todorov put up four blocks, despite playing in just the final two stanzas, while Nikolay Penchev added three to lead Bulgaria at the net. Nikolay Uchikov was the top scorer offensively with 10 kills. Penchev added eight putaways and a team-best three aces, acting as a replacement for Todor Skimrov, who missed the game with a calf strain. Valentin Bratoev chipped in seven putdowns, a block and an ace. Svetoslav Gotsev also tacked on eight points with six kills, a block and an ace, after earning the start at middle blocker over Nikolay Nikolov.

Pablo Guzman was the top scorer for Puerto Rico with 11 points (10 kills and an ace). Maurice Torres was next with eight points (seven kills, 1 ace), but the next highest was Eddie Rivera who chimed in with four points, three kills and an ace, all in the third set.

A 10-3 breakaway by Bulgaria in Set 1 put Set 1 out of reach, leading to a 25-16 lead. The set advantage opened the door for Todorov to make his first appearance of the tournament in Set 2, which saw him post two of his four blocks. Rozalin Penchev closed the door at 25-18.

Puerto Rico boasted a brief lead at 7-5, before Bulgaria turned the tables with two kills and two aces by Penchev. The host team would go on to a 9-2 run to seize the 25-21 win and punch its ticket to Round 2.

“Bulgaria’s serve was good,” Rivera said. “I think that the crowd here makes the difference between Bulgaria and the other teams! The atmosphere is great! Our main goal is to improve ourselves in each game! I am really excited about tomorrow, because we are going sightseeing! Some people told me that Varna is a great city, so I am looking forward to seeing it!”