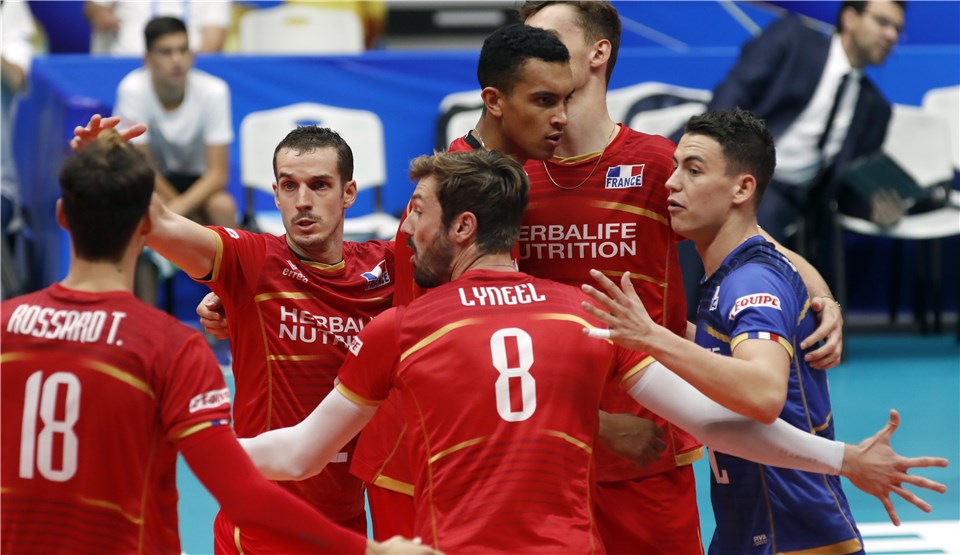 France took to the court without two of its most important players today: Earvin Ngapeth and Kevin Le Roux, both recovering from injuries. Since it was facing off against Egypt, a much weaker opponent, it was the perfect time to do so, as the team will now rest for 2 days, giving its injured players 72 hours of recovery as the team gears up for its final Pool B run. Meanwhile, The Netherlands won its first game of the WCH by handing China a 3-1 defeat. Here is the day’s recap:

France rested Earvin Ngapeth today after the recovering player played 5 sets yesterday against Brazil. His absence did not harm France’s squad, as the Thibault Rossard, Jean Patry, and Barthelemy Chinenyeze trio combined for 35 points on 75%. Rossard started the game in place of Ngapeth, and got to work early on, scoring 7 points in the game’s opening frame, as France closed the first set. The second set was a bit harder, as Egypt opened up a 16-12 lead, but Rossard’s strong service game helped the French squad dig out of its hole and close the second set as well. The third set was the easiest of it all, as the Frenchmen opened up a huge lead early on and never looked back, closing the game 3-0. The French team will now try to build on its win against the Netherlands, will Egypt will try to bounce back against China.

France’s coach Laurent Tillie: “I’m satisfied with the win. The most important thing is that we managed to win 3-0. We had some difficulties, especially in the second set, but this is normal after the match yesterday against Brazil. Tomorrow is a rest day for us, so we will have more time to prepare for our next match here against the Netherlands.”

France’s captain Benjamin Toniutti: “It was not easy for us today, because I think everybody was still thinking about the match against Brazil yesterday. It was not easy to come back in the gym 24 hours after a hot game like this. I think it was an important match day for us. We came back in the game in the second set with the entrance of Lyneel and Patry. Like yesterday, every guy who came in the court gave a lot of energy and some positive points. We have to continue this way. Tomorrow is a free day for us, so we are going to have a good rest because three games in three days is not easy. We have to prepare really good for the game against the Netherlands.”

France’s Julien Lyneel: “I think it was a difficult match. The team of Egypt is very good, they played very well tonight and it was very hard for us to win this game. Luckily, we won this game by 3-0 and that is perfect for the next phase. We have a rest day tomorrow and we will enjoy it and recover. I hope that we will win the match against the Netherlands by 3-0 again. Actually, I hope to win our two next games by 3-0 because we need the points for the second phase. For sure we are not going to have easy matches against the Netherlands and Canada. We have to prepare really good for these two teams.

Egypt’s coach Mohamed Moselhy Ibrahim: “Just like in the previous two matches here in Ruse, our team played really well in the first two sets. In some moments we had the lead in the result, but we couldn’t manage to close the sets. I think the other teams have more experience than us and this is helping them a lot. Despite the lost today, I think my team is improving day by day and now we must prepare for our next two matches in the pool which are really important for us. We need to win our next games!”

The best actions of the game between France 🇫🇷 @FFVolley and Egypt 🇪🇬 are right here! Enjoy some more #volleyball as this Friday is almost coming to its end!#FIVBMensWCH #volleyballWCHs pic.twitter.com/JabvXeqSrF

The Netherlands finally achieved its first win at WCH after handing China a 3-1 (25-21, 25-13, 23-25, 25 ) loss. Dutch captain Nimir Abdel-Aziz finally showed fans the offensive power they expect from him, contributing with 22 points, while Chuan Jiang had 20 in the losing effort. The Dutch hit 60% from the field, holding China to a 45% effort, while also out-blocking the Chinese team 16-4 for the match. Next up for the Dutch is Brazil, while China will try to bounce back against Canada.

Dutch Coach Gido Vermeulen: “I’m satisfied not only with the result today, but with the way we played as well. I think we played really well in serve and block. We were scoring point after point with these two elements. It was nice to see my players to perform so well. We knew exactly where we had to serve. The boys executed the plan excellently. Brazil played a great game yesterday against France. They had a free day today, so they will be rested and ready for the match against us. We can play with free minds against them, because they are the best team in the world and we will try to show them that we can play a good volleyball as well.”

Netherlands’ Jasper Diefenbach: “We knew that this will be a very important game for us because we lost the first one against Canada. We needed this victory to pass through to the second round. We already had a loss, so it was really important to win today. And we did it, we did a good job. I think we had two amazing sets, the second and the fourth one, and only this third set we should have won but in the final moments of the set we made some mistakes. We had a great team performance, some great scouting. We have scouting team who is there 24/7 for us, scouting the opponent. I am very proud of everything we did. We should keep it up. I expect a tough match tomorrow. Brazil is an amazing team, one of the best teams in the world, so we have absolutely nothing to lose. We will give our best and we will see what will happen. We will have some rest now, some time to prepare. We are going to give our best to win tomorrow.”

Netherlands’ Daan Van Haarlems: I’m really happy with this victory! We achieved our first win at this World Championship and it is a really important step for us. Our main goal is to qualify for the second round and now we can be satisfied because we played well today. In the first two sets we played great. We had some difficulties in the third set, which we lost, but in the next one we managed to be concentrated and to achieve this important victory.

Chinese coach Raul Lozano: “In the beginning of the match it looked like it would be a tough game, but in the first two sets the Netherlands started to play really well in block and attack. They had two players with a very good level of attack and we didn’t manage to stop them. Now we will try to change the mental state of the players, to motivate them for our next match, and I hope my team will play better tomorrow.“