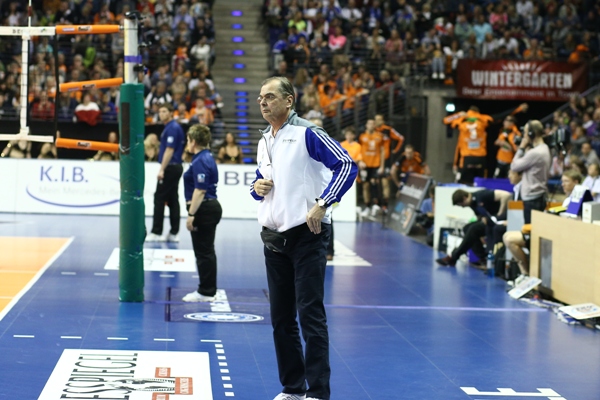 When a club with the prestige and history like Berlin Recycling Volleys fails to perform up to expectations, the fall... Current Photo via br-volleys.de

When a club with the prestige and history like Berlin Recycling Volleys fails to perform up to expectations, the fall out can get messy. And that is exactly what happened when manager Kaweh Niroomad decided to cut ties with Australian coach Luke Reynolds and bring in decorated German coach Stelian Moculescu.

Luke Reynolds leaves the team without making it a full season in Germany. The 32-year old is one of the youngest head coaches in volleyball and was younger than several of the players. He had previously played for Canadian powerhouse Brandon University and coached Polish club Jastrzebski Wegiel. He had this to say after the move:

In life sometimes you fall, but it’s how you get back up and push on towards your goals that builds your character the most #lazerfocus #onwardsupwards #building #lessonsoflife #ciao #tschuis

Incoming head coach Stelian Moculescu is a German volleyball legend, having coached Berlin’s rival VfB Friedrichshafen from 1997 to 2016 and winning the Champion’s League in 2007. He has also coached the German national team to their first Olympic selection in 36 years in 2008. Moculescu had reportedly turned down several offers after stepping down from Friedrichshafen 18 months ago. Expectations will be high for the 67-year old, and at more than double Luke Reynold’s age, it will be a good test of old-school vs. new-school volleyball. Berlin is hoping he will be more Greg Popovich and less Phil Jackson.