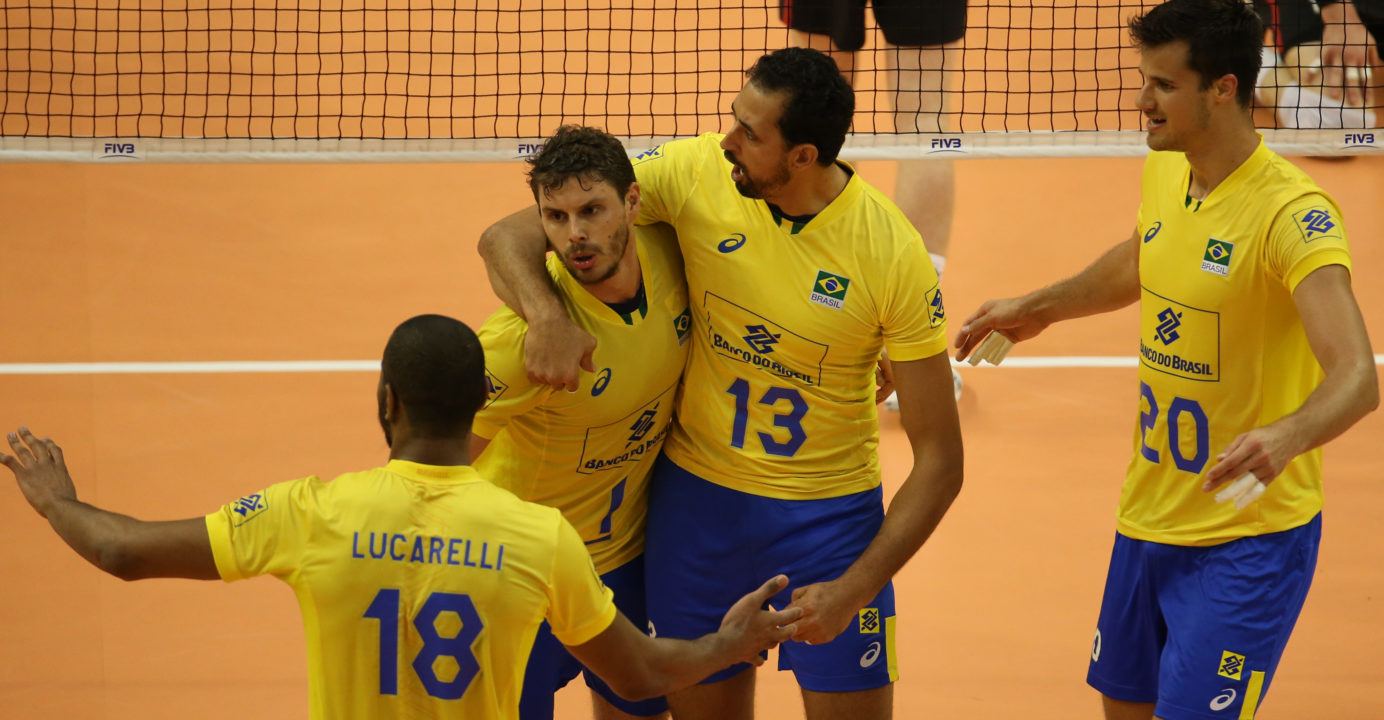 Brazil won in four sets over Canada and Bulgaria edged Poland in five sets to kick off Pool E1 play on Friday. The victories start both teams on the right foot heading into tough contests on Saturday.

Brazil is prepping for an opening day rematch with Poland, while Bulgaria will take on the Canadians, which played their third five-setter in four matches of World League play.

It wasn’t a perfect match, but Brazil found a way to win against the Canadians. The Brazilians committed 26 errors, but got help from 32 Canadian miscues in the win. Brazil tallied three more kills, both teams managed eight blocks and Canada won the service battled 9-8.

“We did not play a brilliant match,” Brazilian captain Bruno Rezende said. “We made some mistakes, but of course we are a young team with new players. We need to communicate a lot inside the court and I think today we did not do this well. Our match was a little bit difficult because of this. Of course, in the end the important thing is to win so I am satisfied with the victory. In the next two matches we should improve our game.”

“We played well, but in the end of the sets their serving made the difference,” Canada’s Steven Marshall said.

“I am proud of the way we played tonight,” Perrin said. “We fought hard against a strong team that is not easy to play against. So I want to give a lot of credit to my teammates and I cannot wait to come back here tomorrow.”

Brazil will face Poland on Saturday in a rematch of an opening day game which Poland won in five sets. Canada will take on Bulgaria.

Reigning World Champions Poland were no match for Bulgaria’s Tsvetan Sokolov, who put down 21 points, especially late in a five-set win on Friday. Bulgaria outserved Poland 6-4 and tallied nine more kills (56-47) to make up the difference after committing 45 miscues in the match (to just 36 for Poland).

Poland led 18-14 in Set 3, but near disaster struck as captain Michal Kubiak, who had led the team to that point, twisted his ankle. The Polish side managed to hold on for the 25-19 win to go up 2-1 in the match. Poland again held the advantage at 13-11 in Set 4, but Rozalin Penchev chipped in four kills and carried Bulgaria to the 25-23 win to force the tie-breaker.

Bulgaria led 8-5 at the changeover in Set 5, but Poland knotted the score at 10. After ties at 12 and 13, Poland thwarted Bulgaria first set point chance, but a block two plays later sealed the victory for the home side.

“Bulgaria was the clever team in the fourth set and especially in the tie-breaker,” Poland’s Pawel Zatorski said. “They played really well on counter attack, led by Tsvetan Sokolov who made the difference in the end.”

In addition to Sokolov’s 21 points, which came on a match-high 19 kills and two blocks, Bulgaria had help from Nikolay Penchev, who scored 15 points.

“We made too many errors especially in serving, but we managed to win,” Sokolov said. “It is a really important win for us, but this is only the start of the tournament. So now it is time to rest and prepare for our next opponent, Canada.”

Poland was led by Bartosz Kurek, who managed 14 points, with 13 kills and a block. Dawid Konarski (12) and Kubiak (11) followed. Kubiak served up three aces, while Konarski added 11 kills.