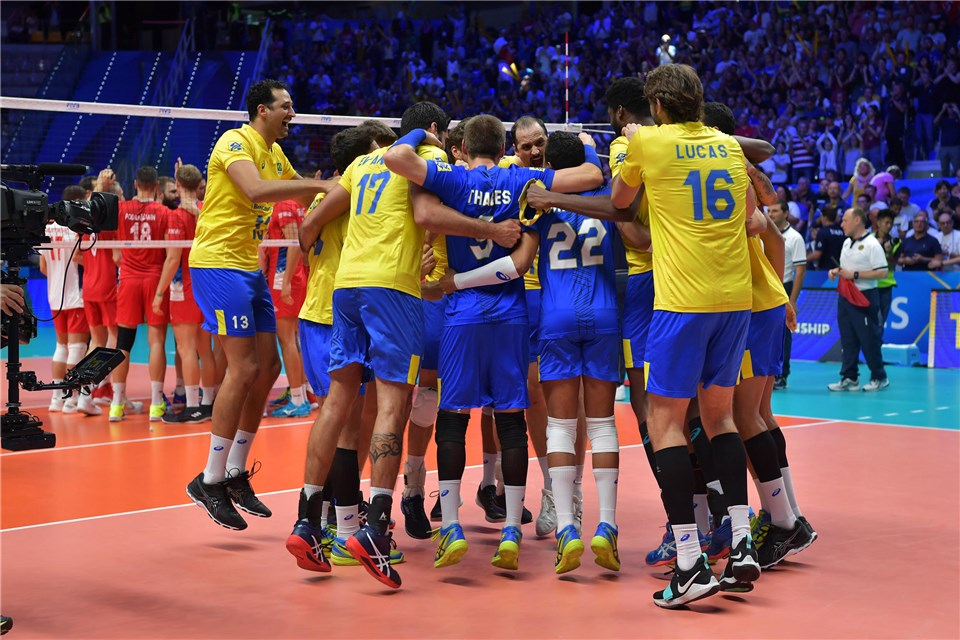 The Brazilian national team just booked a ticket to a place no one but themselves thought possible for them to go. As a result, they will participate in their 5th straight WCH finals. The team’s semifinal match against Serbia was a tight 3-0 race (25/22, 25/21, 25/22), but at the end the Brazilian squad was just more efficient.

The connection between setter Bruninho and old time middle blocker partner Lucas Saatkamp worked better than ever, as Lucas hit 7/7 in the game. Douglas Souza continued with his unexpected MVP-like performance, leading the team with 11 points. Meanwhile, heavily contested Lipe, who battled injuries all throughout the team’s preparatory period, came out swinging in the game’s decisive moments. Backup setter William Arjona played most of the third set and acted as a closer for the team, once again proving he is an invaluable asset to the squad. Brazil hit 61% as a team from the field, while holding Serbia to 52% efficiency.

On the Serbian side, Aleksandar Atanasijevic did his part with 16 points, but it wasn’t enough to propel his team forward. The Serbian squad will leave the championship with heads held low, as it knows it was a clear favorite to a finals berth, specially when considered that Brazil has played its entire tournament without its two starting outside hitters.

Brazil’s captain Bruninho: “I look at our sweaty jerseys and my heart beats faster: that is what we are, a team that plays like a team. Look at me and William switch places to win the match. In our team nobody is untouchable, and all want to contribute. That is why we won more than any other national team in recent history.”

Brazil’s coach Renan Dal Zotto: “My men never stopped playing together, and that allowed us to do some incredible things. No prediction on the second semifinal and, most important, no preference: Poland and USA are two formidable teams.”

Serbia’s coach Nikola Grbic: “We give credit to Brazil: they were the best in all skills and punished us for every little mistake we made. But I cannot blame my team either: I believe they did good – even if they could have done a little better.”

Serbia’s Aleksandar Atanasijevic: “We keep having these ups and downs – that’s our flaw and we have to understand how to fix it. Congratulations to Brazil, and now let’s regroup and fight for the bronze medal until the end, and enjoy the beautiful atmosphere created by the Serbian and Italian fans today.”