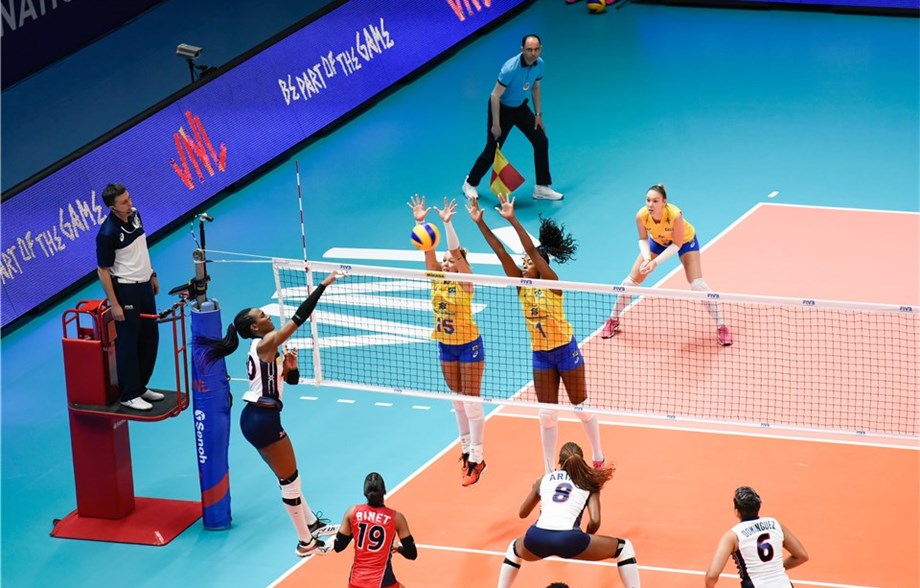 Brazil, Turkey combined for 29 blocks in sweeps of the Dominican Republic and Argentina to close out Pool 8 action in Ankara, Turkey on Thursday.  Current Photo via FIVB

Brazil ran the table on Pool 8 and extended its win streak to five matches with a sweep of the Dominican Republic on Thursday.

The Brazilians were just too much at the net and from the service line, outdoing the DR 14-6 in stuffs and 6-0 in aces. Brazil also had help from 22 Dominican miscues in the match.

Amanda Francisco and Adenizia Da Silva drove the ship for the Brazilians with 14 and 12 points respectively. Francisco paced the offense with 11 kills and two aces, while DaSilva turned in a team-high seven blocks and four kills. Tandara Caixeta supported both with seven kills in a match where Brazil looked to its bench with 12 players seeing action.

After falling behind 3-0 in Set 1, Brazil turned things around to lead 8-6 at the first technical timeout. The Brazilians went on to a 22-16 advantage before Tandara ended the stanza at 25-20. In Set 2, Brazil’s blocking took over, with five stuffs helping the team cruise to a 25-10 victory. Francisco served nine straight points in Set 3 to lift the Brazilians to a 15-6 lead, putting the match out of reach.

Turkey ended its three-match VNL homestand with a decisive sweep of Argentina on Thursday.

The Turkish side made hay at the net and from the service line, outdoing the Argentines 15-6 in blocks and 9-2 in aces. Turkey also bested Argentina 35-33 in kills and were gifted 16 points on Argentine miscues, while committing just 10 of its own.

Meryem Boz notched 15 points to lead the Turkish attack, posting 14 kills and a block. Meliha Ismailoglu was next with 12 points, seven on kills and four from the end line. Eda Erdem Dundar chipped in five kills and a team-leading five stuffs, while Gamze Alikaya served up five aces.

Searching for answers in what would be its sixth straight loss, Argentina played 10 different players. Elina Rodriguez was the team’s top scorer with 12 points, all on kills, while Anahi Tosi added 10 points, including nine putaways. The pair had help from Victoria Zabala, who served up the team’s two aces and added four kills.

Turkey raced out to a 14-5 lead, but opened the door for Argentina slightly, allowing its foes back within four at 19-15, before closing out the set on an Ismailoglu ace at 25-16.

Set 2 saw the Turkish side go up 16-9 and cruise to a 25-16 win as Argentina struggled to handle the team’s strong serves.