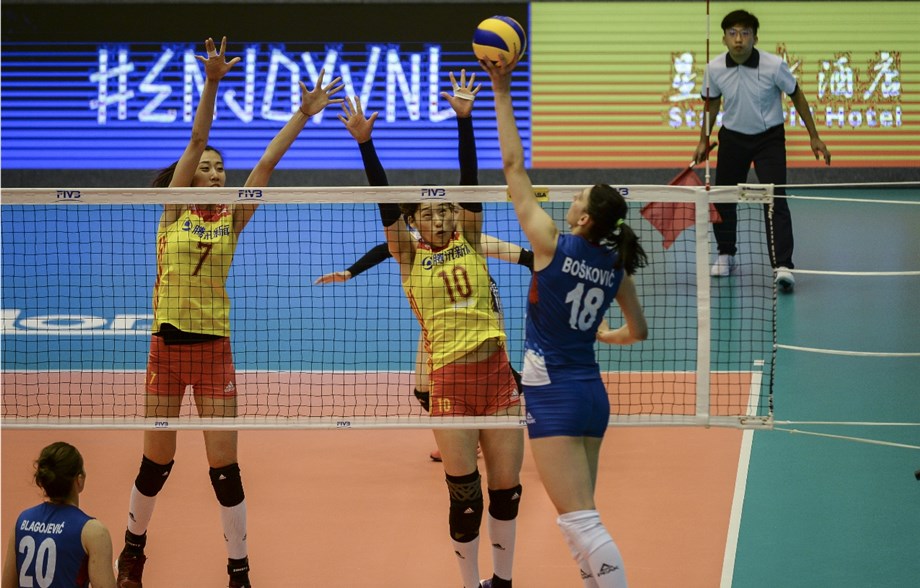 It was a day of standout scoring efforts in Macau, China, on Thursday with Malwina Smarzek recording a tournament best 38 points for Poland in a 5-set loss to Thailand, and Serbia's Tijana Boskovic racking up 32 points in 4-set win over China. Current Photo via FIVB

Malwina Smarzek recorded a tournament best 38 points for Poland, but it was the Thailand team that went home happy with a close five-set win on Thursday.

Smarzek came through for the Polish side at seemingly every turn, including the game-winner in Set 4, but in tiebreak, the Thai team built an 11-9 edge and held on for the win.

Thailand coach Danai Sriwacharamaytakul: “The Poland players are very strong in attack and blocking, but my players played to our best capabilities to overcome them. We hope to keep improving and hopefully we will get more positive results in the Volleyball Nations League and also do well at the Asian Games.”

Thailand captain Pleumjit Thinkaow: “It was a hard game for us against Poland today.  Their players are tall and masters in blocking. We kept our style of play throughout and corrected our mistakes from previous games and I am really delighted with the win.”

Poland captain Agnieszka Kakolewska: “We feel a bit deflated after getting ourselves motivated for the match and working so hard for five sets. We made some mistakes at crucial times which led to our loss.”

China just did not have the horses to compete with No. 3 Serbia on Thursday, trailing by 21 kills, four blocks and two aces, although errors kept them in the four-set match.

Tijana Boskovic racked up 32 points, with 25 kills, a team-high five blocks and two aces, to pace Serbia. Brankica Mihajlovic followed with 15 points (13 kills, 2 aces), while five other players got in on the offensive action. Milena Rasic was next on the team with eight putaways, while Jovana Stevanovic and Ana Antonijevic each served up two aces.