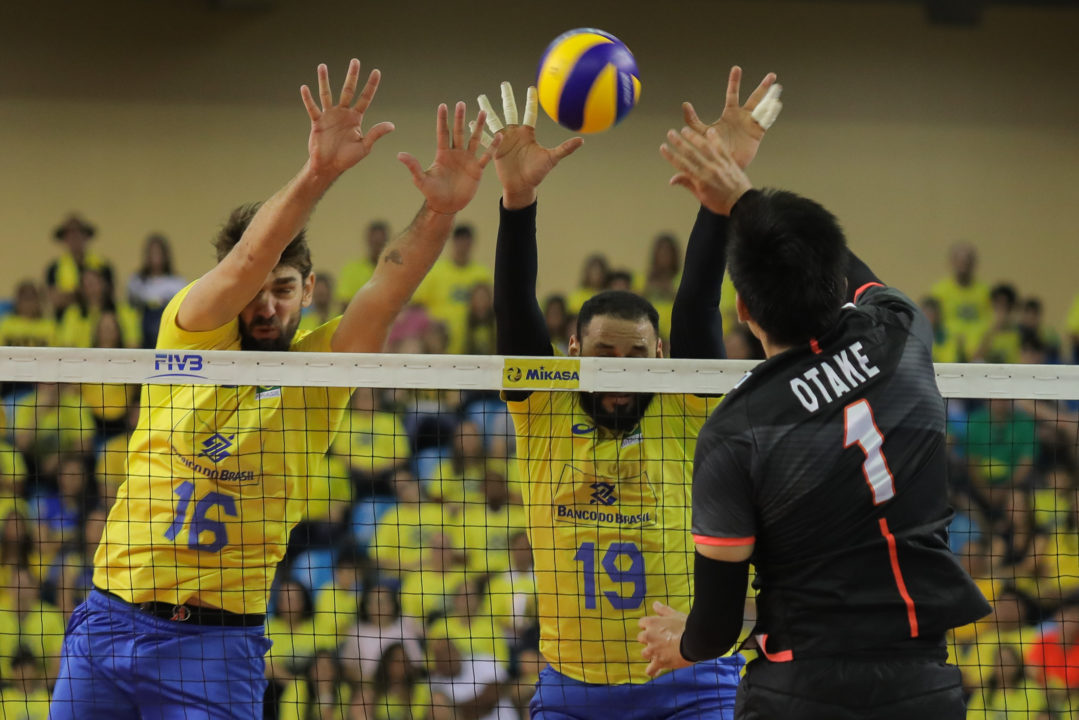 Brazil put up 11 blocks and Wallace DeSouza resumed his role as the team's top scorer after a day off in a sweep of Japan.  Current Photo via FIVB

Brazil put up 11 blocks and Wallace DeSouza resumed his role as the team’s top scorer after a day off in a sweep of Japan.

The Brazilians led 11-3 in blocks, 5-4 in aces and had help from 26 Japanese miscues (while committing 22). Japan, surprisingly, led offensively 36-33 in kills.

Issei Otake scored 13 points, all on kills, to lead Japan. Kentaro Takahashi (9) and Hiroaki Asano (9) followed. Asano tallied eight kills and a block, while Takahashi added five putaways, a team-best three aces and a block. Japan chose to sit out its top three scorers from Friday’s five-setter against the USA for much of the match. Tatsuya Fukuzawa and Haku Ri both came in briefly, but combined for just one offensive swing, while Masahiro Yanagida and Yuji Nishida both remained on the bench throughout.

The teams traded blow for blow in Set 1, leading to a 23-all tie when Otake tooled the Brazilian block to give Japan a set-point try. An upset was not to be however, as Brazil rallied for the 26-24 victory.

Douglas Souza and DeSouza starred in Set 2, but Japan kept pace as Takahashi served up a few aces. In the end, however, a Brazilian stuff capped a 25-19 win.

The remainder of the match was delayed when the lights went out in the arena for approximately 30 minutes early on in Set 3, but when play resumed, Brazil cruised to a 25-20 victory.

Brazil captain Bruno Rezende: “I’m pleased with the result. We know that we still have a lot to do to grow as a team. We have to improve. We were nervous in the first set and our rivals had the chance to win, but we managed to recover and win. We were more focused, made fewer mistakes and served very well in the next two sets. We will have a tough match tomorrow and we need to play at a high level to win against USA.”

Japan coach Yuichi Nakagaichi: “Before the match we were focused with getting the side out by serving well to put pressure on their passing. We had a great start but they were much better than us. We also had some errors with service and attack.”