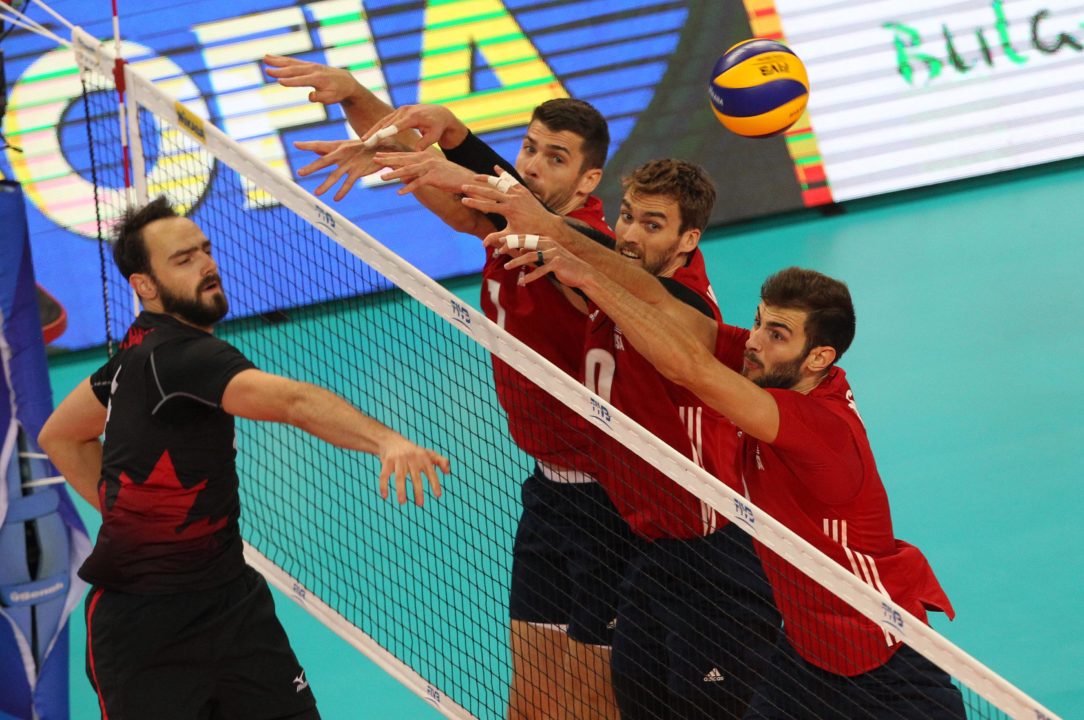 The U.S. continues to play musical blockers, rolling out a whole new McDonnell-Smith rotation in Friday's win over Canada. Current Photo via FIVB

Bulgaria, co-hosts of this year’s World Championships and solo hosts of the 2nd round Pool G, have a big matchup against the United States on Saturday. The American men are 6-0 so far in the tournament, which after Poland’s loss on Friday makes them one of only two unbeaten teams left so far. A win of any flavor would ensure that Team USA advances to the Final 6, and a 3-2 loss still puts them very, very close to the championship round.

The Bulgarians are 14-11 all-time versus the United States, but the Americans have won 8 of the teams’ last 10 matchups. Those two defeats were a 3-1 decision at the 2013 World League (the day after a 3-0 American sweep); and a  3-2 loss at the 2014 World League in a tournament where the US went 3-1 against Bulgaria.

While the Americans have a clear direction at hitter (Taylor Sander and Aaron Russell at outside hitter, Matt Anderson at opposite), they continue to rotate their middle blockers through.

Even into the 2nd round of play, against big regional rivals Canada, U.S. head coach John Speraw went completely off-book and brought in Dan McDonnell for his first serious action of the tournament. He scored only 3 points in the match, and split time with Smith (6 points) in every set (Smith entered at the 10th point in each). The U.S. as a team played exceedingly well in the rotation- they hit an incredible 70% as a team. It was just errors, especially on service, that kept Canada in the match for a set – the U.S. gave up 30 points on errors, as compared to just 18 for Canada.

When the U.S. is hitting that well at all other positions, then that gives them the freedom to put their best defensive middle alongside Holt without having to depend much on them for offense (Anderson was 20/24, Russell was 15/20).

If the U.S. wins against Bulgaria, the rotations will have paid off – they will have a full complement of middles who are simultaneously in match form, but who aren’t fatigued from the long tournament – a luxury as the World Championship advances.

They’ll be heavily-favored on Saturday against a Bulgarian team that continues to persevere in front of a home crowd in spite of an unbelievable run of injuries. Missing probably 4 members of the World Championship team, including setter Georgi Bratoev, Todor Skrimov has missed matches in the tournament as well with lingering calf problems. The calf didn’t seem to  hamper him much in Bulgaria’s 3-0 sweep of Iran on Friday, where he scored 17 points on 16/27 hitting and had 7 aces.