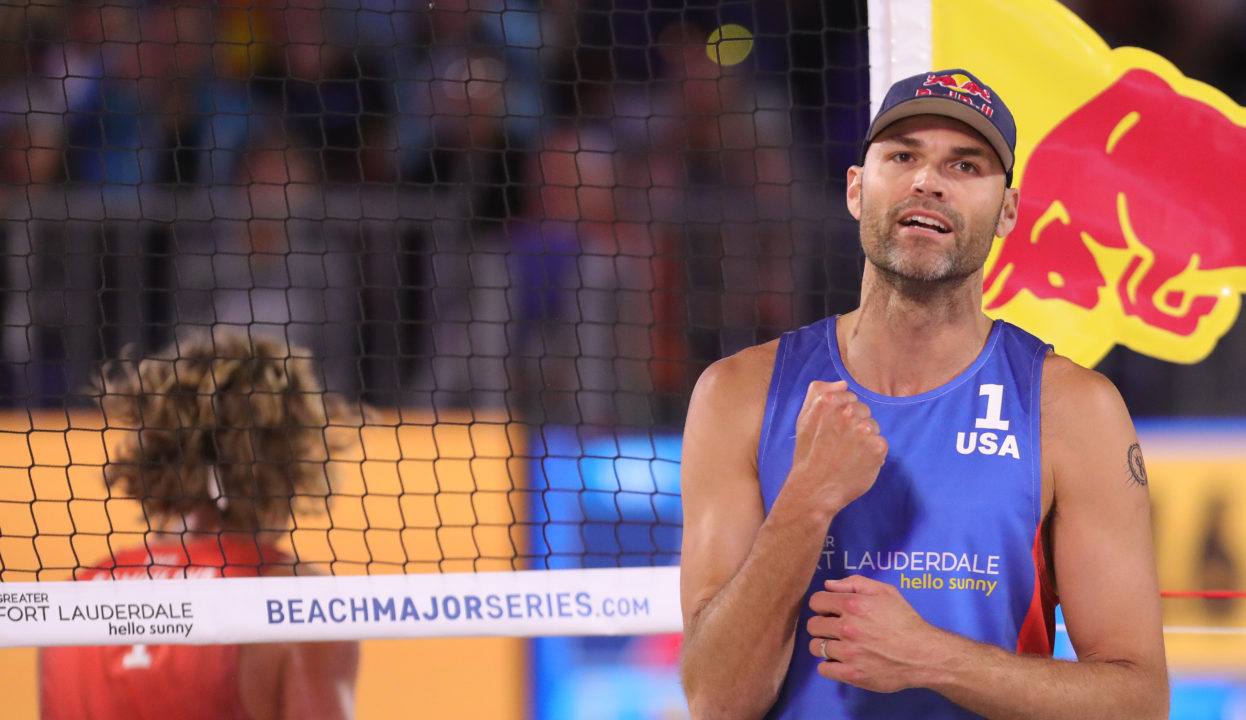 Phil Dalhausser shared video of the gold medal point at the 2008 Olympics, which came 10 years ago today. VolleyMob looks back at Dalhausser's continued success and career since that day.  Current Photo via FIVB

Phil Dalhausser was seemingly feeling a little reminiscent on Wednesday, tweeting an Instagram video of the gold medal point at the 2008 Olympics.

Exactly 10 years to the day this happen…apparently HD tv didn’t exist in 2008.

The post got us thinking about what a 10 years it has been for Dalhausser since being crowned Olympic gold medalist alongside then teammate Todd Rogers.

Dalhausser pocketed 17 more titles alongside Rogers from the Olympic Games to 2012 when they parted ways, racking up $244,800 in FIVB winnings in the span, including eight grand slam titles.

Dalhausser/Rogers finished ninth at the London Olympics. Then, in 2013, Dalhausser teamed up with Sean Rosenthal, winning three titles, including the Rome Grand Slam and Gstaad Grand Slam.

He played one tournament with Casey Jennings, the Sao Paulo Grand Slam, in Oct. 1013, finishing second, before continuing on with Rosenthal for the 2014 season. The duo tacked on three more titles, winning Grand Slams in Stavanger, Gstaad and Long Beach, and finishing second at the Hague. Rosenthal and Dalhausser played two tournaments together in 2015 before parting ways.

Dalhausser joined forces with current partner Nick Lucena in 2015, finishing second at their inaugural FIVB tournament, the Long Beach Grand Slam on Aug. 23, 2015. The duo has won 11 FIVB titles together, including the Fort Lauderdale Major in Lucena’s hometown on March 4, 2018, and finished fifth at the 2016 Olympics in Rio.

Dalhausser/Lucena were crowned World Tour Finals Champions in Hamburg in 2017 (Aug. 27, 2017), and were runnerup in 2015 in Fort Lauderdale.

That doesn’t even count the 29 AVP and other domestic titles Dalhausser has racked up since 2009 (56 since 2005), including three AVP crowns with Lucena in 2018 alone. The most recent came last week at the Manhattan Beach Open where the pair were crowned back-to-back champions.

He has won at least one FIVB title for 13 straight years.

Dalhausser told VolleyMob back in February that there is more out there for him to accomplish, even at age 38.

“There is always a desire for more,” Dalhausser said. “I guess you could say I am a little greedy as far as winning is concerned because I have always said that winning is something that never gets old. That is what drives me: being the best in the world and the best that I can be. As long as I keep winning, I think I am going to keep playing. Hopefully we win a bunch this year because that just makes the sport way more fun.”