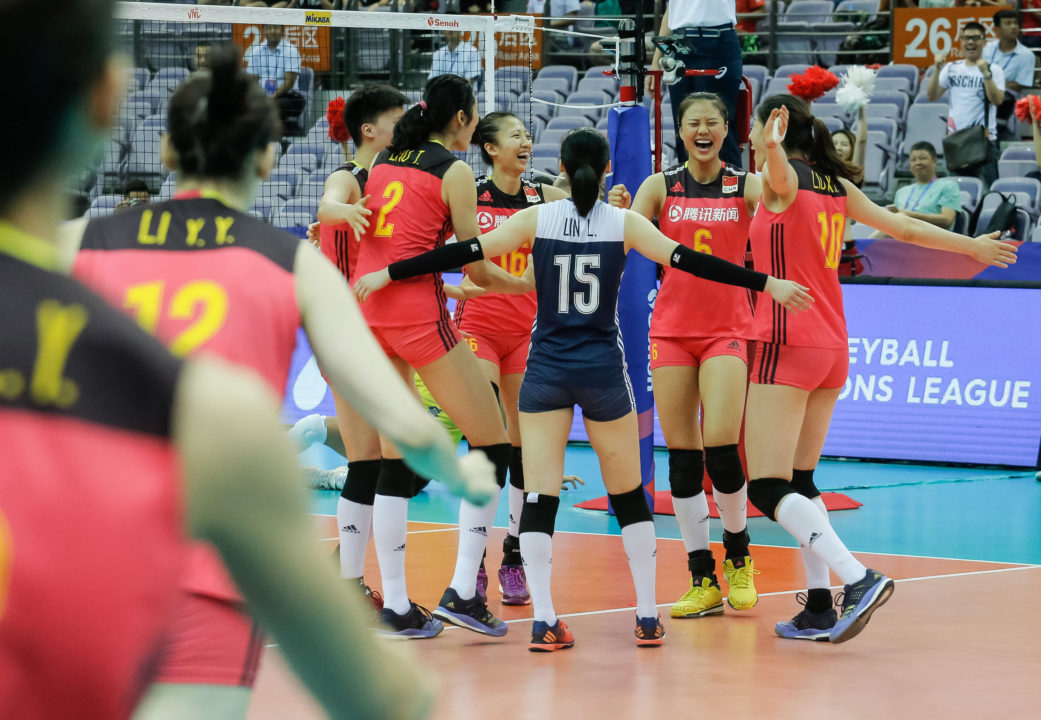 China, which hosted the women's finals and two other legs of the inaugural Volleyball Nations League tournament this summer, has been chosen to host three stops per gender in 2019. Current Photo via FIVB

The international volleyball federation FIVB is continuing to push its future financial fortunes in on the growth of the sport in China. Having already announced Nanjing as the host city for the final rounds of the first three women’s editions of the newly-formed Nations League tournament, FIVB has awarded 6 preliminary stops of next year’s Nations League tournaments to the country as well, with 3 for the men and 3 for the women.

While the FIVB has not announced the full hosting schedule yet for next year’s tournament, VolleyChina has posted a call to cities for hosting. Specifically, they’ve packaged the hosting duties together, so that one city will host both men’s and women’s stops of the tour.

Among the novel information here is that the tournament will start a week later next season (owed likely due to the fact that there’s no World Championships to try and enforce a break before).

Both American teams will make the trip to China, as will the Portuguese men: who are confirmed as accepting their invitation to join the Nations League after winning the Challenger Tournament this summer. They’ll replace South Korea, who went 1-14 in the Nations League and will be relegated out of the tournament as a result.

China hosted 4 of the 5 stops of the women’s Nations League in 2018 (including Macau and Hong Kong), meaning their team only had to leave their home country once in the tournament, while the rest of the field was sent around-the-world-and-back. In the men’s tournament, China hosted just twice: once in Ningbo, and once in Jiangment, to bookend the preliminary rounds of the tournament.

Potential host cities are expected to have a high level of competition conditions with international hosting experience preferred, an independent capacity to bear civil liability, no major defaults or illegal business activities in the three years prior to recruitment, and an approval letter from the department of sports in the province or municipality.

The United States won the inaugural VNL title on the women’s side, besting Turkey in the championship match. China finished third, topping Brazil in a sweep for the bronze medal.

On the men’s side, China finished 15th at 3-12. Russia swept host France in the title match, while the United States topped Brazil 3-0 for the bronze.

The 2019 Men’s Finals are slated to be played in the United States, the first of three straight as announced on July 8.

It doesn’t seem fair that on top of hosting the finals, 3 out of the 5 prelims will be in China! I thought the whole idea of the tournament was to have each country garner their fan base in as many participating countries, so we can spread the popularity of volleyball.. Seems like China is manipulating that for financial gains.

It’s pretty clear that China is making a massive financial investment into the game, and FIVB is rewarding them for that. FIVB and CEV have been more overt as of late in declaring that they will reward countries that make significant financial investments in the sport. It’s probably a good thing for the global growth of the game, but is obviously problematic when it comes to competitive balance.