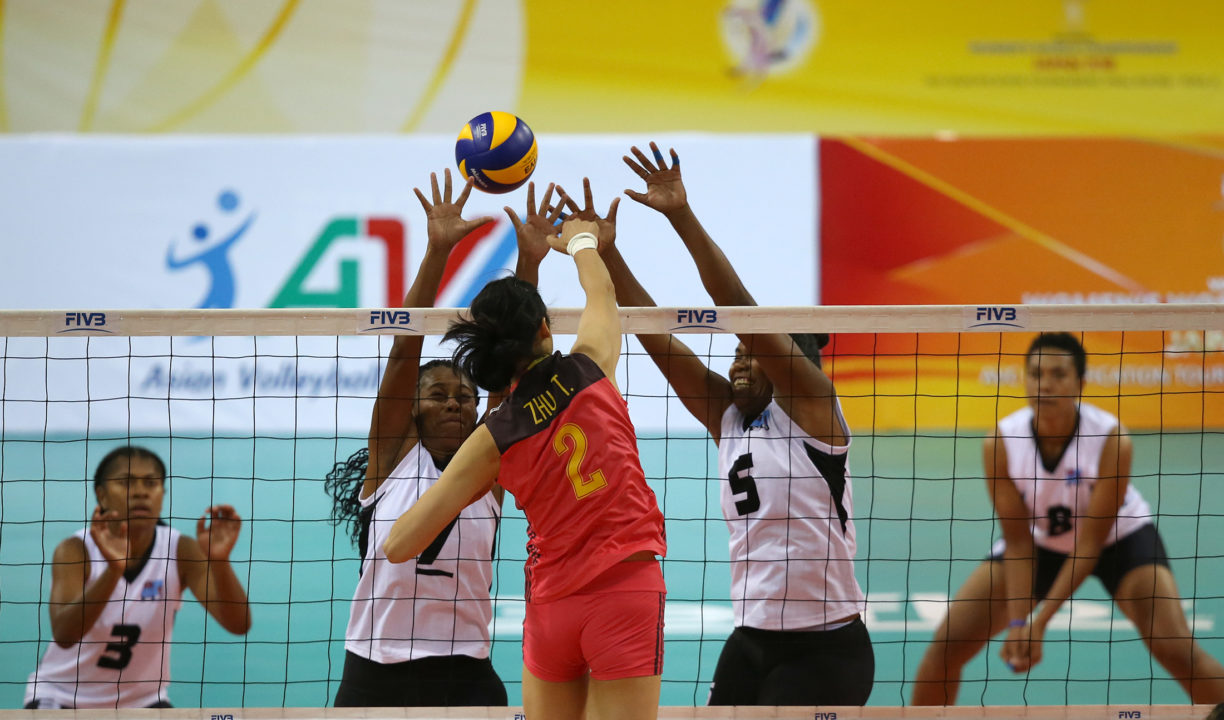 China and Thailand are in the driver’s seat in the race to earn bids to the 2018 World Championships, moving to 2-0 at the AVC Qualifiers on Thursday.

China bested Kazakhstan in Pool A, while Australia rebounded from its Wednesday loss to Chinese Taipei. Each team will play four matches in pool play, with the top two teams records-wise advancing to Worlds.

In Pool B, Thailand picked up its second win, this time taking out Vietnam via sweep. North Korea evened its record at 1-1, following Wednesday’s loss to South Korea.

Australia used its serving prowess to dominate Fiji and move to 1-1 in Pool A play.

The Aussies served up nine aces, including three by top scorer Rebecca Reeve, who wrapped the match with 12 points. Jennifer Sadler also added double-digit points with seven kills, one block and two aces.

“It is a good start for us and hopefully it works well from here and we will see what we can bring into the next match,” Reeve said. “I think we just had an aggressive mindset today. It was our game plan from the beginning to go all out and we did that. For sure, that kind of effort will come with errors but it all worked out for us in the end.”

Fiji couldn’t handle the Australian serves or attacks from Reeve and middle Katarina Osadchuk in a 25-18 Set 1 loss. Late unforced errors in passing and hitting doomed Fiji in Set 2, while Osadchuk and Beth Carey starred for Australia in a 25-16 win. Set 3 was no contest as Australia did everything right, cruising to a 25-10 victory and the sweep.

China blazed to an easy sweep of host Kazakhstan behind captain Zhu Ting‘s 15 kills and an all-around statistical win. The Chinese posted 49 kills, 10 blocks and four aces in the victory.

“It was a challenging match, and for us, it was, at times, difficult to play,” Chinese coach An Jiajie said. “But still, we managed to find the best solution to win against Kazakhstan team.”

China ran away with Set 1 (25-14) with a balanced attack and strong blocking. Kazakhstan played better in Set 2, but could not break through in a 25-19 loss. The Chinese wrapped up the match with a 25-15 win.

“Today, we showed our best, but of course we had our errors, too,” Kazakhstan captain Radmila Beresneva said. “But overall, I think this game was amazing.”

Jong Jin Sim racked up an eye-popping 32 points, with 30 kills, a block and an ace in North Korea’s sweep of Iran.

Meanwhile Iran’s Mahsa Saberi put up 15 points, including 14 kills in the loss.

North Korea went up 14-8 midway through Set 1, but Iran charged back with help from Mona Ashofteh and Mona Deris Mahmouudi to claw back into a 23-all tie. A Jong Jin Sim kill and Ju Un Hyang ace secured the Koreans the 25-23 win. Set 2 was dominated by Korea, which went ahead 21-9 and continued on to a 25-11 win. It was a one-point game (15-14) midway through Set 3, but Korea held the advantage and went on a 25-18 victory and sweep.

Ajcharaporn Kongyot scored a match-high 14 points to lead Thailand in its sweep. Ajcharaporn downed 12 kills, while adding a block and an ace. Pleumjit Thinkaow followed with four kills, four blocks and three aces.

“My team’s performance is satisfactory today,” Thailand coach Danai Sriwacharamaytakul said. “However, I must praise Vietnam for their improved receiving. We just focused on our game strategy in an effort of destroying their defence quickly. I think we still have to improve on our combination attacks. If we have good reception, I believe we can effectively match DPR Korea in our next clash.”

Thailand quickly built an 18-12 lead and cruised to a 25-17 Set 1 win. The Thai team used strong serving and a quick attack to jump ahead 20-12 in Set 2, but followed with a handful of miscues to allow Vietnam back within three at 20-17. Wilavan Apinyapong came in for Thailand after a timeout and the team closed out the stanza with a 5-0 run. Vietnam did manage a 9-7 lead in Set 3, but could not hold off a Thai attack, falling 25-17.