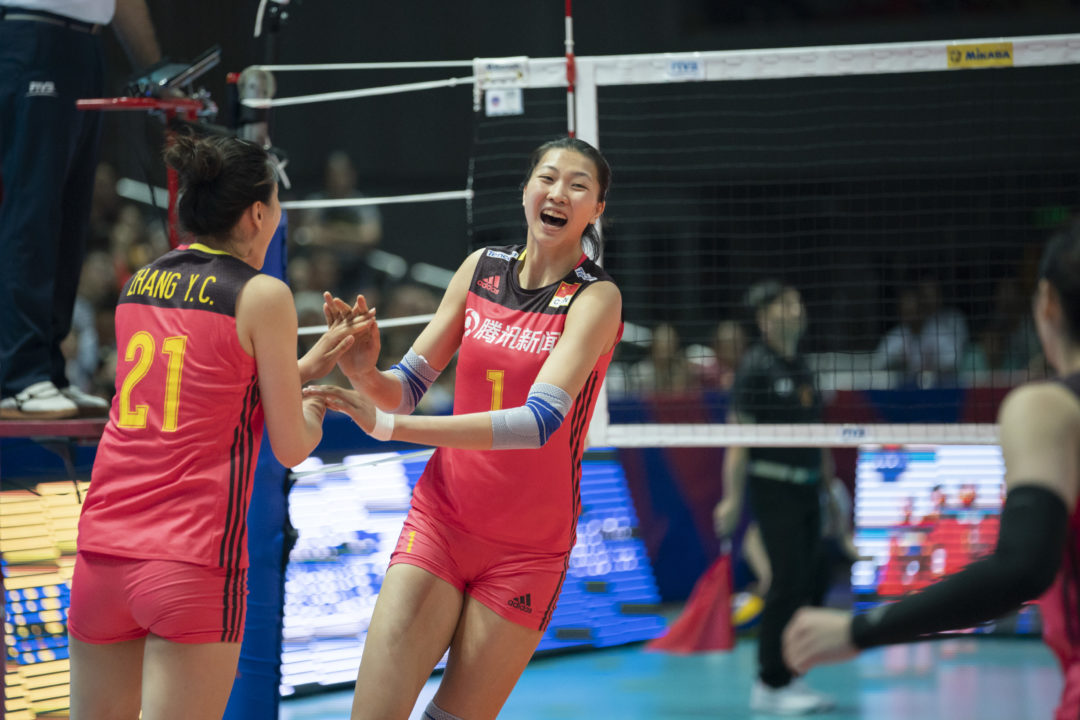 3 members of China’s senior national team will miss at least the next 3 weeks of action at the 2018... Archive Photo via FIVB

3 members of China’s senior national team will miss at least the next 3 weeks of action at the 2018 FIVB Women’s Volleyball Nations League while representing their country in another competition. Yuan Xinyue, Gao Yi, and Liu Yanhan have been called for duty at the 2018 World Military Volleyball Championship in Canada from May 25th to June 5th. That means that they’ll be absent from weeks 2, 3, and 4 of the new Nations League, at least, missing stops in Macau, Hong Kong, and Jiangmen.

Zhang Changning will also miss week 2 in Macau (she missed week 1 as well), with coach Lang Ping saying that she is still dealing with some health issues. She is receiving treatment and may be back next week. Changing was an outside hitter on China’s 2016 Olympic Team.

The 21-year old middle blocker Xinyue will be most-missed among the group. With 38 points, she was China’s leading scorer in week 1, and one of the highest-scoring middle blockers of any team in the week.

“I am a soldier and represent the army,” Xinyue said when she accepted the appointment to the Bayi Army team. “To defend the Bay Army’s honor is to show the elegance of the military athletes.”

Gao saw limited action as a backup, playing in 3 sets and not scoring any points, while Liu was more successful in her limited opportunities with 4 points in 2 sets played at outside hitter.

The moves leave China relatively-thin in the middle, which won’t bode well for their upcoming headliner match against Serbia that is a repeat of last year’s bronze medal match at the FIVB World Grand Prix. Ni Yan and Yuanyuan Wang got the start at middle blocker in their absence.