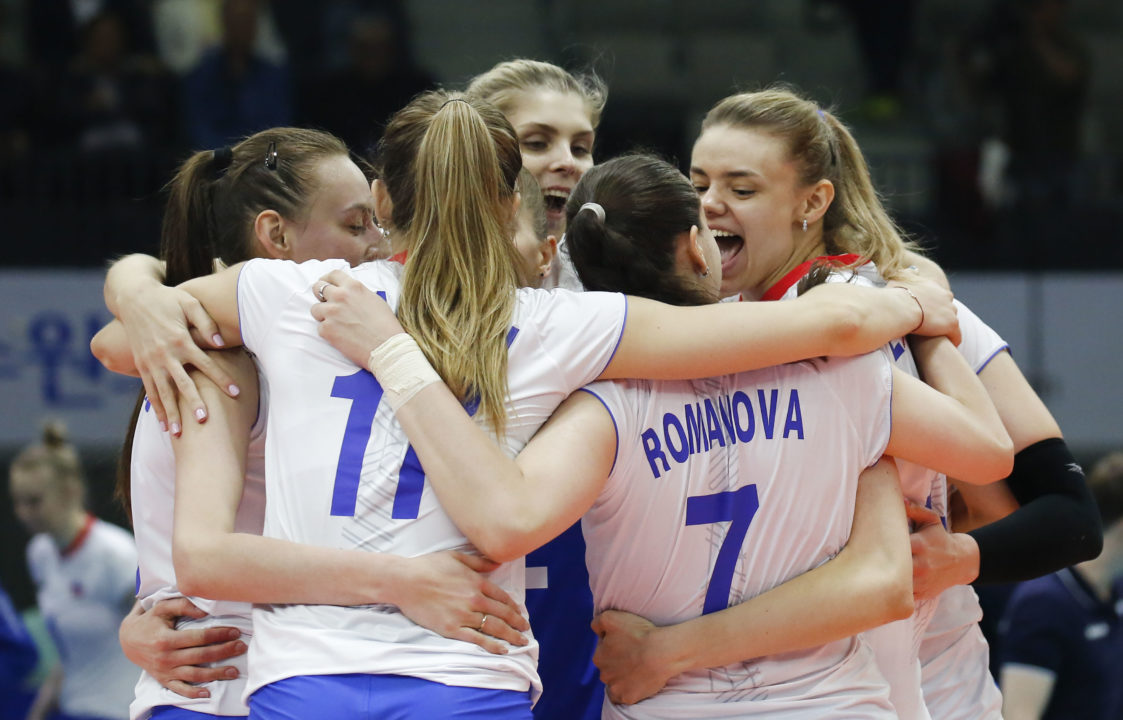 A balanced offensive attack, including three players with nine or more kills, helped lift Russia past Italy to open Pool 6 play, meanwhile a strong service game and a 29-point effort by Kim Yeon Koung were key in lifting the homestanding Koreans to a four-set win over Germany. Current Photo via FIVB

The Russians avenged last year’s World Grand Prix loss (3-2), but did so against a Italian side without many of its stars, due to head coach Davide Mazzanti’s decision to hold them back until Week 3 to allow his newcomers experience and his standouts some rest of long European seasons.

After the Italians fell behind 4-1 early, Lubian kept the team in the game. Later, after playing to a 24-all tie, a Malykh kill gave Russia the edge it needed en route to a 26-24 win.

In Set 2, it was Bosetti who answered Russia early on, but Malykh and Voronkova came on last, guiding Russia to a 10-1 run and on to the dominating 25-12 victory.

Italy bounced back, racing to a 7-3 lead in Set 3 behind the serve of Sylla. The Italians boasted an 18-15 advantage, only to see a Voronkova kill and Fetisova block pull the score even before sealing the sweep after another marathon rally.

Russia head coach Vadim Pankov said: “Several star players were missing from Italy’s team today. However, they are still strong. Although younger Italian players like Elena Pietrini, Marina Lubian, Rossella Olivotto and Anastasia Guerra are strong enough to show a good performance, I am satisfied with the result of today’s game.”

Italy head coach Davide Mazzanti said: “The Russia team did a good job. I am disappointed at today’s performance. We lost our confidence after the first set and made a lot of mistakes. We lost because we could not show our attacking skills.”

A strong service game and a 29-point effort by Kim Yeon Koung were key in lifting the homestanding Koreans to the four-set win. Korea outserved Germany 13-5, while also edging its foes in kills (51-41) and blocks (12-10).

It was a two-woman effort for Germany, which was paced by Louisa Lippman (17) and Maren Fromm (16). Lippman downed 16 kills and added an ace, while Fromm posted 14 kills and two blocks. Marie Scholzel was next in scoring with nine points, including a team-leading five blocks and two aces. Jennifer Geerties also served up two aces.