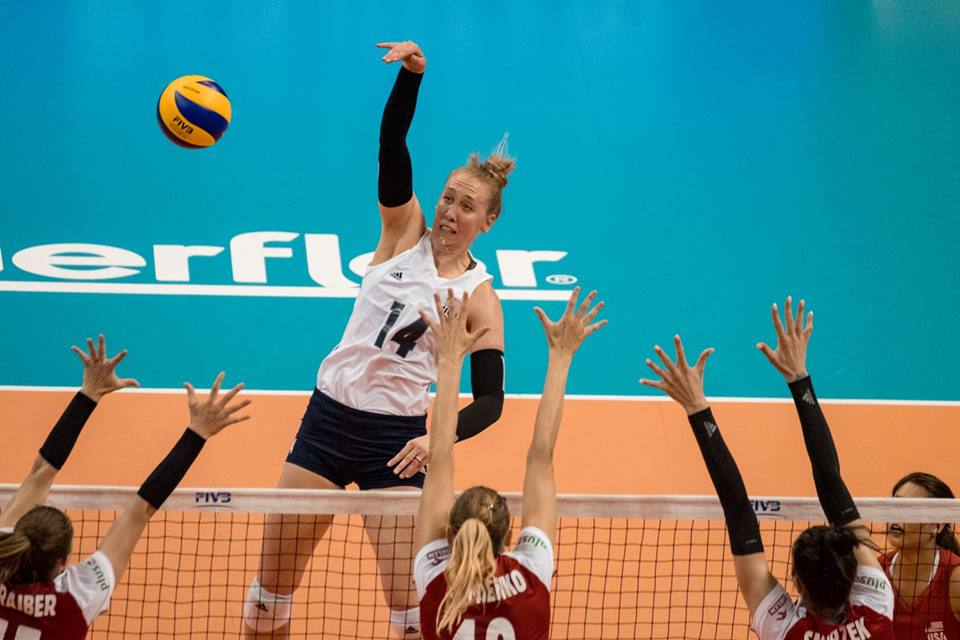 The Americans used a strong block and a 21-point effort from Michelle Bartsch-Hackley to score a sweep of Japan to open week 2 of the Volleyball Nations League, meanwhile the Dutch relied on their offensive prowess to best Belgium in five sets.  Current Photo via USAV/Eric Francis

The Americans used a strong block and a 21-point effort from Michelle Bartsch-Hackley to score a 25-20, 25-16, 25-23 sweep of Japan to open week 2 of the Volleyball Nations League.

The United States outblocked the Japanese 12-3, including seven stuffs by Lauren Gibbemeyer, and outserved them 4-1 in aces, with three by Bartsch-Hackley, en route to the win.

Bartsch-Hackley continued to make her presence known as the standout scorer for the Americans with a match-high 18 kills, followed by Kim Hill‘s 17 points (15 kills, 2 blocks) and Gibbemeyer’s 11 (3 kills, 7 blocks, 1 ace). Kelly Murphy chipped in six putaways.

Yuki Ishii was the top scorer for Japan with 13 points, all on kills. Mami Uchiseto and Mari Horikawa managed six points apiece, all on kills, while seven other players notched a kill. Japan changed its lineup throughout the match, utilizing 12 of its 14 players in the match, with just Ishii and Haruyo Shimamura going the distance alongside libero Kotoe Inoue.

A handful of kills were the difference in a Dutch five-set win over Belgium, which kept the Netherlands undefeated in Volleyball Nations League action.

The Dutch boasted a 73-63 lead in putaways and held a slight 8-7 margin in aces, to overcome a 14-10 deficit in blocks in an otherwise even match.

The Dutch faced a match-point, trailing 29-28 in Set 4, but scored three in a row to send the contest to a decisive fifth set. Balkestein-Grothues was a key factor as the Netherlands surged ahead and on to victory in Set 5.