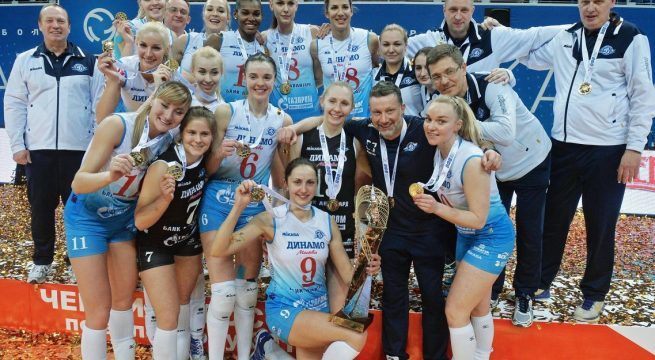 Croatian star middle-blocker Maja Poljak is retiring after the conclusion of the 2017 club season. Poljak’s 22 years of professional volleyball began in 1995 when she first played for Croatian club team Mladost Zagreb. In 1999 when Poljak played for the Croatian women’s national team, the team won a silver medal at the European Championships in Italy.

In 2000, Poljak moved to Italian club team Minetti Vicenza, who she played for from 2000-03. Then, she joined Italian team Volley Bergamo from 2003-08. During her time with Volley Bergamo, the team won back-to-back CEV Champions Leagues. In 2008, Poljak moved to Turkey and competed for Turk Telekom Ankara before joining Vakifbank Istanbul in 2009. With Vakifbank, Poljak won the CEV Champions League in the 2010-11 season.

After Vakifbank, she moved to play for Eczacibasi VitrA from 2011-2016.

Throughout her career, Poljak has received multiple honors as a player:

Poljak has spent her last season competing for Russian club team Dinamo Moscow. Her team won the 2016-17 Russian Championships and are now competing in the Club World Championships.

In the Club World Championships, Dinamo Moscow dropped the first contest 0-3 against Vakifbank, before sweeping Hisamitsu Springs 3-0. Follow along with our coverage of the tournament here.