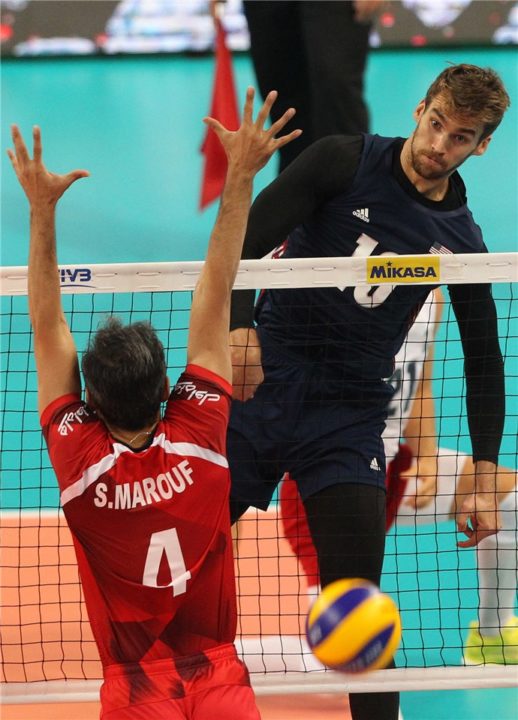 Dan McDonnell moved from middle blocker to the outside hitter position in the USA's 3-0 sweep over Iran.  Current Photo via FIVB

When the United States took the court against Iran in the last match of the Second Round, they already had clinched the top spot in Pool G and a place in the Final Round. The lineup on the floor utilized players who had not received considerable playing time during this stage of the tournament. Dan McDonnell was on the floor, but as an outside hitter. He has always played middle blocker in his time at UC Irvine, with the United States National Team, and during his professional career with various clubs.

This is a drastic change for McDonnell, as there are many different skill sets involved in playing each of the positions. One of  the biggest differences between the positions is that McDonnell had to take part in serve receive as a passer. He has not had to do this as a middle blocker. He also has to play back row defense. He did not get replaced by a libero for his rotations in the back row. McDonnell was tasked with playing 3 rotations of defense in the middle back and not just half a rotation from left back. McDonnell had to set the post at the left antenna on the block. He also had to hit a higher set at the left pin instead of a quicker tempo ball in the middle.

What prompted this change in postion? When the 14-man rosters were announced for the 2018 FIVB World Championships, one notable feature of Team USA‘s squad was the abundance of middle blockers. Most teams bring enough players to put 2 completely different teams on the court. That would include 2 setters, 2 liberos, 2 opposites, 4 outside hitters, and 4 middle blockers. John Speraw decided to take a different approach. The United States was a bit thin at the outside hitter position since Thomas Jaeschke tore his ACL back on June 15th in the Volleyball Nations League. Without Jaeschke available, only Taylor Sander, Aaron Russell, and Jake Langlois were named to the squad. Matt Anderson also has the potential to play outside hitter, his position with Zenit Kazan. Speraw chose to include 5 middle blockers instead: Max Holt, Dave Smith, Taylor Averill, Dan McDonnell, and Jeff Jendryk.

With Speraw wanting to give Sander and Russell a rest, Langlois was the only outside hitter available on the bench. That prompted the coach to get creative. McDonnell finished with match with 7 points on 4 kills and a match-high 3 service aces. He also posted a 50% attack average in a 3-0 sweep over the best team from Asia.