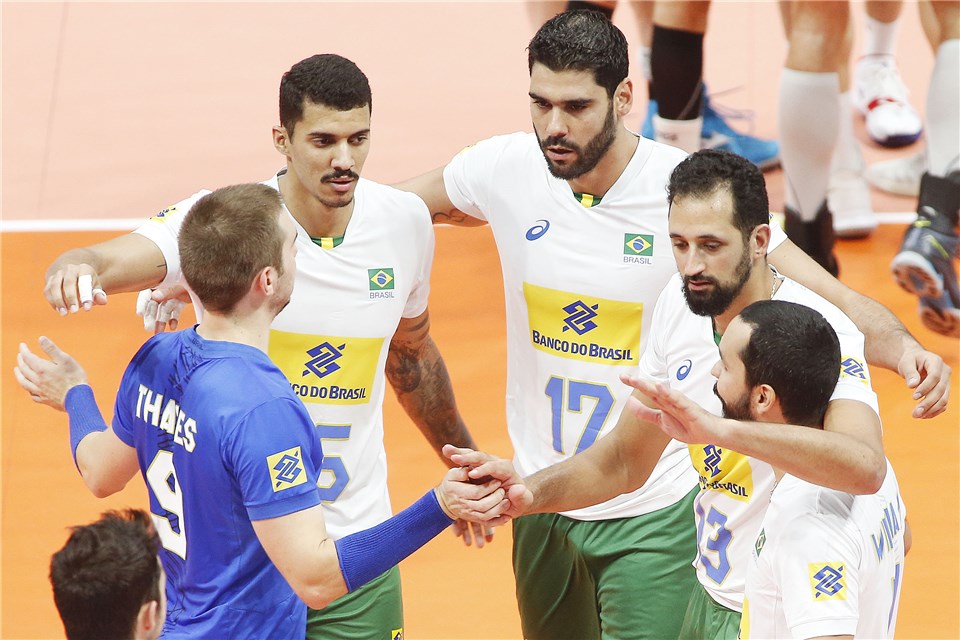 Logic prevailed in Pool F as Brazil moved on to the competition’s Final 6. However, Australia, Belgium, and Slovenia really overachieved in the competition, given their circumstances, making Pool F the feel-good story of the competition. Here is the day’s recap:

Already qualified for the Final 6, Brazil decided to rest its starters against Belgium. The team’s secondary unit took a while to get warmed up, dropping the first two sets to Belgium. Evandro Guerra’s play, with 30 points on 68% hitting, and the help of Lucas Loh (13) and Eder Carbonera (10) points, helped turn things around and showed that they are suitable replacements for the team’s top stars. However, Douglas Souza had to step in for Kadu in the third set to bail the team out, showing that he is indeed so far Brazil’s biggest trump card in the competition.

Brazil’s head coach Renan Dal Zotto: “Winning today was very important and also giving some time on the field to the ones that are not titular players was our priority. It went good for us and we are very happy. Everybody in my team is ready to help in each moment. This is the World Championship and it is good to know that everybody in the team can contribute somehow, to fight. Brazil is entering in the right rhythm The toughest moment of the Championship is getting closer; the level is really high. We are leaving for Turin, being ready. It was important to give some rest to Bruno, Lucas, Lipe.”

Brazil’s Eder Carbonara: “This victory over Belgium is a good signal for us. This matchup was an opportunity for the players that haven’t been playing so much, to show what they can. It was a strange beginning, but then things got better. It was a nice win and we will go to Turin to reach the semi-final. All the six teams there are really strong: but we are also and we are ready.”

Belgium’s head coach Andrea Anastasi: “I am not disappointed, because I think that after two amazing sets, Brazil started to play better and better and to be honest we can’t achieve this level of volleyball. They play much better than us and they are in control of the game in every moment. In this moment we can’t compete against them. Finishing on second place in Pool F is amazing for us, it means we are in Top 8. Now I have a lot of information for my team and this is very important for me. I don’ t Brazil are the big favourite in Turin. There will be six amazing teams and it is not going to be easy for anybody.”

Belgium’s captain Sam Deroo: “Brazil made some changes in the third set and it changed the way things were unfolding. We needed some time to get used to their rhythm. In this Brazilian team there are the top players of the Brazilian championship that is really strong as well. They all have their qualities and you can see that during the match they are able to raise the level. Maybe we got a little bit tired as well at some point of the match. We showed some nice actions, nice volleyball and I am proud of the team. Of course, we are not happy to finishing with a loss, but overall we can be satisfied. The fight in Final 6 will be for sure very interesting, it is going to be a close game and I wish I could have been there, but this time we will watch from our homes. However, we made a big step at this World Championship and the experience here will be helpful for us.”

Belgium’s Pieter Verhees: “We could be satisfied with the way we performed in the tournament – five victories and three losses is a good balance for us. Being among the first eight teams is a good achievement for our country.”

Australia bid farewell to the tournament with a very hard fought 3-12 win against Slovenia. Behind the score twice in the game, Luke Smith (21 points), Lincoln Williams (16), Nehemia Mote (12), and Samuel Walker (12) led the charge to turn things around. Toncek Stern (16) and Tine Urnaut (15) came short in the losing effort. Regardless, both teams can now leave the WCH knowing they performed at their absolute peak. Nobody expected Australia to make it to Round 2, yet they did and played valiantly against the world’s best teams, making each set count. Slovenia, in its maiden run, was also able to scare a lot of bigger teams. If both teams keep developing, they’ll be forces to reckon with in the future.

Australia’s head coach Mark Lebedew: “Of course, I am really happy with the win and for my guys. We had a really long international season; we worked together really well from the first day to the last one. Winning this match is a reward for the job done by the team and because of this, I am happy. Right now, it is difficult to make a general evaluation of our performance during the World Championship, but I think that for us this competition was a really big step – we had a good VNL season, a good Championship here, we competed for real. There is no team we had not a chance to compete with. Of course, there are better teams, but we showed that we can play volleyball that people like to watch.”

Australia’s Lincoln Williams: “We fought hard in every match, doesn’t matter who we played against. Today was another opportunity for us to win. I felt that we were strong as a team, even though we lost the first and the third set. I felt great here – our reserve players did a fantastic job, as they made the fans in the sports hall start supporting us. Our performance in this World Championship was satisfactory for us. We can be better and in the future, we will definitely be better. This was a good step, a good level to keep going forward.”

Slovenia’s head coach Slobodan Kovac: “I think that Slovenia have had an opportunity to achieve something historic in our group. We started good in this World Championship, but we lost our hopes when we lost from Brazil and today it was difficult to play. We were not motivated. I am sorry that we could not find our best game. My Slovenia was dead and it seemed that we were just waiting to go home, people in the sports hall noticed that and started cheering for Australia.”

Slovenia’s Mitja Gasparini: “Losing yesterday from Brazil affected us today. This loss was not supposed to happen, as we believed that we could make it among the top six teams. Because of this, today we played emotionally and we paid the price for this. We lacked aggressiveness in some of the moments, but in general, we showed that we could play on a high level. This cycle has not come to an end for us – we have a young team and I think our next aim should be the Olympic Games in 2020.”