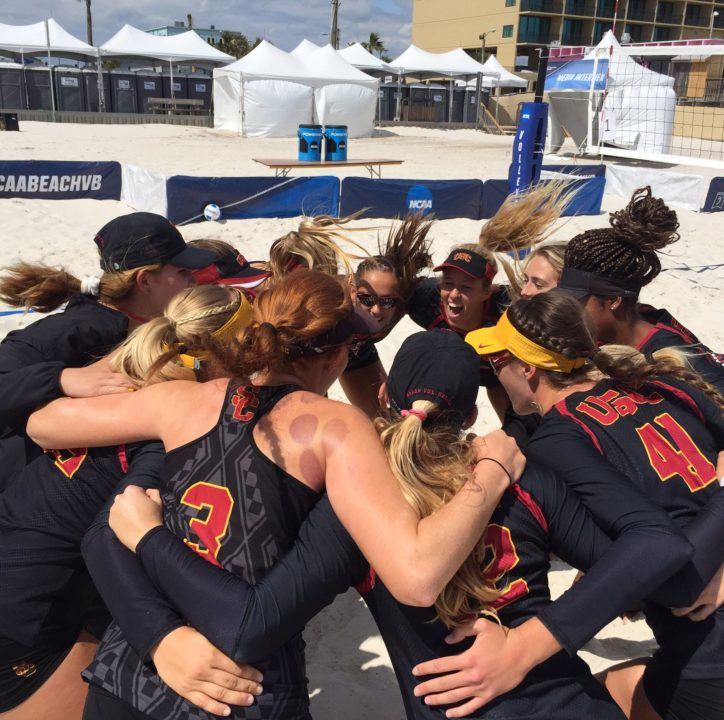 No. 1 seed USC and No. 3 Pepperdine are still alive in the winner's bracket, while UCLA, Florida State, LSU and Hawaii are in contender's bracket. Current Photo via USC Athletics

Day 2 of the NCAA Beach Volleyball Championships begins at 2 p.m. ET Saturday in Gulf Shores, Alabama. The four match slate, including three matches from the contender’s bracket of the double-elimination tournament and one from the winner’s side.

After two rounds of matches, six teams remain. No. 8 South Carolina and No. 6 Long Beach State exited with a pair of losses on Day 1.

Sunday’s slate features an 11 a.m. semifinal match between the loser of the USC/Pepperdine match and the winner of the 5 p.m. loser’s bracket match. The national champion will be crowned live on TBS following the 2 p.m. match.

2017 Series History: The Tigers and Rainbow Wahine did not play each other in 2017.

LSU, which is making its NCAA Beach debut, earned its first NCAA win Friday night, edging No. 6 Long Beach State 3-2. The match, which featured four three-set affairs, came down to the third set of the No. 3 pairing, which the Tigers’ Olivia Powers and Katie Lindelow won 17-15. The Tigers, which play in the Coastal Collegiate Sports Association, fell to No. 2 seed UCLA 3-0 in the opening round.

After winning its opening round match over Florida State 3-1, Hawai’i hit a buzzsaw in No. 1 USC, falling 3-0. The two remaining pairings (No. 2 and No. 5) were in the third set when the match ended with a 22-20 victory at the No. 1 spot. The Big West champions had won 12 of their last 13 matches before falling to the Trojans.

2017 Series History: UCLA is 2-0 against FSU this season. The Bruins topped Florida State 3-2 at the East Meets West Invitational, March 12, in Manhattan Beach, California, and also won 4-1 at the Fifth Annual Surf and Turf Invitational, April 1 in Miami.

Florida State stayed alive in the contender’s bracket by topping South Carolina 3-0 in round two action Friday. The Seminoles fell to Hawaii 3-1 in the opening match of the tournament, winning the No. 5 pairing and dropping a pair of three-set matches at No. 2 and No. 4. FSU was the 2016 NCAA runner-up and had won nine of its last 10 matches, before meeting the Rainbow Wahine.

UCLA downed LSU 3-0 in the opening round, but fell short in round 2 against Pepperdine, 3-1. The Bruins, which finished second at the Pac-12 Tournament, won at pairs 1, 2 and 5 against LSU, although two of the three wins took three sets. Against the Waves, UCLA’s top pair of Nicole and Megan McNamara won in straight sets, but the Bruins lost pairs 2, 4 and 5 in straight sets.

2017 Series History: USC topped the Waves 4-1 at the Pepperdine Kick Off, March 4 in Malibu.

USC won 4-0 over South Carolina in its opening match, taking pairings 1, 3, 4 and 5, all in straight sets. The Trojans advanced to the semifinals with a 3-0 win over Hawaii. The two-time defending national champions won on line 1, 3 and 4 in straight sets. Pairs two and five were split at a set apiece when the match ended. Top pair Kelly Claes and Sara Hughes moved to 138-4 in their careers with the two victories.

Pepperdine topped Long Beach State 3-0 in round 1 and dropped UCLA 3-1 in round two to make the semifinals. In the opening match, wins on line 1, 2 and 4 sealed the sweep, while the team won pairs 2, 4 and 5 in straight sets against the Bruins. No. 2 pair Corinne Quiggle and Brittany Howard are now 26-3 on the year, while No. 4 pair Deahna Kraft and Anika Wilson are 24-5. The West Coast Conference Champions are vying for their third national title, following AVCA crowns in 2012 and 2014.