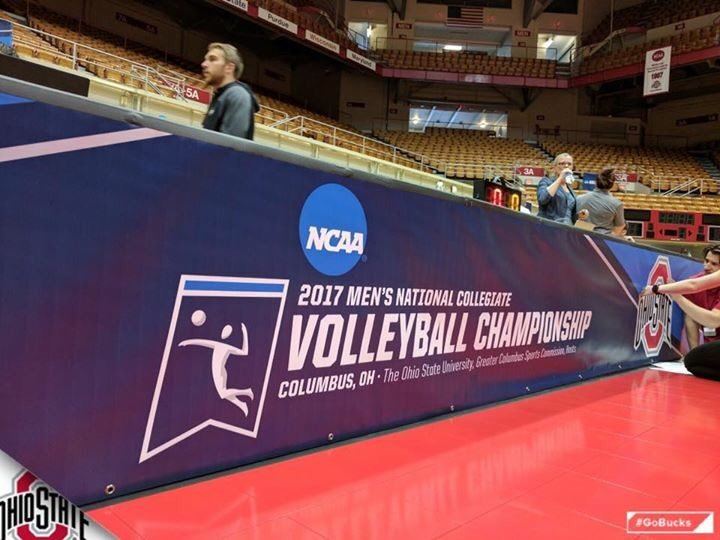 In a rematch of the 2016 title game, No. 1 seed and defending champion Ohio State faces No. 3 seed BYU at 7 p.m. ET Saturday.  Current Photo via Ohio State Athletics

The top players from both squads are back in 2017. For the Buckeyes, opposite Miles Johnson posted 15 kills and two aces. Middle Blake Leeson added 11 kills, while hitting at an amazing .846 clip (11 kills, no errors, 13 swings). Outside hitter Nicolas Szerszen and middle Driss Guessous both chipped in 10 kills. Guesseous accounted for three of OSU’s four blocks, while Szerszen served up three of the team’s eight aces. Ohio State (30-2) hit at a .374 clip as a team in the match.

For the Cougars, outside Brenden Sander accounted for 14 kills, while hitting at a .500 clip. Opposite Ben Patch chipped in 10 kills, seven digs and four blocks. Middle Price Jarman and outside Jake Langlois put up five blocks apiece as BYU outblocked the Buckeyes 12.5 to four. BYU ended its season at 27-4.

How They Got Here

Ohio State defeated Hawaii 3-0 in the semifinals Thursday night to earn its spot in the title match. BYU won a play-in match against Barton College on Tuesday and upset No. 2 seed Long Beach State on Thursday to make its way to the final.

Ohio State (31-2) won its league best 26th MIVA regular season title and also grabbed its 16th MIVA Tournament title sweeping Grand Canyon in the tournament finale. In the 25-23, 25-18, 25-19 NCAA semifinals win over Hawaii, Nicolas Szerszen downed a team-best 10 kills, while hitting .409 and adding eight digs. At the net, Blake Leeson led the way with seven stuffs. As a team, OSU hit at a .358 clip and outblocked Hawaii 11-1. The Buckeyes, in their 50th season at OSU, are playing at home in St. John Arena, where they own a 542-104 all-time mark (.839 winning percentage).

OSU’s first team All-American outside hitter Nicolas Szerszen leads the nation with 0.63 aces per set, while also ranking among the national top 10 in points per set (4.54, 9th) and hitting percentage (9th, .385), and ranking 11th in kills per set (3.70). Senior opposite Miles Johnson, a first team All-America selection, is tops among the Buckeyes offensively, downing 3.88 kills per set, while hitting at a .338 clip and serving up 49 aces. At the net, redshirt sophomore middle Blake Leeson leads the way with 1.00 stuffs per set.

While the Buckeyes and Cougars did not face one another during the 2017 season, they did take on nine familiar foes with similar results. Both teams took on USC, UCLA, Stanford, Barton College, Long Beach State, Lewis, Loyola, UC Irvine and Hawaii.