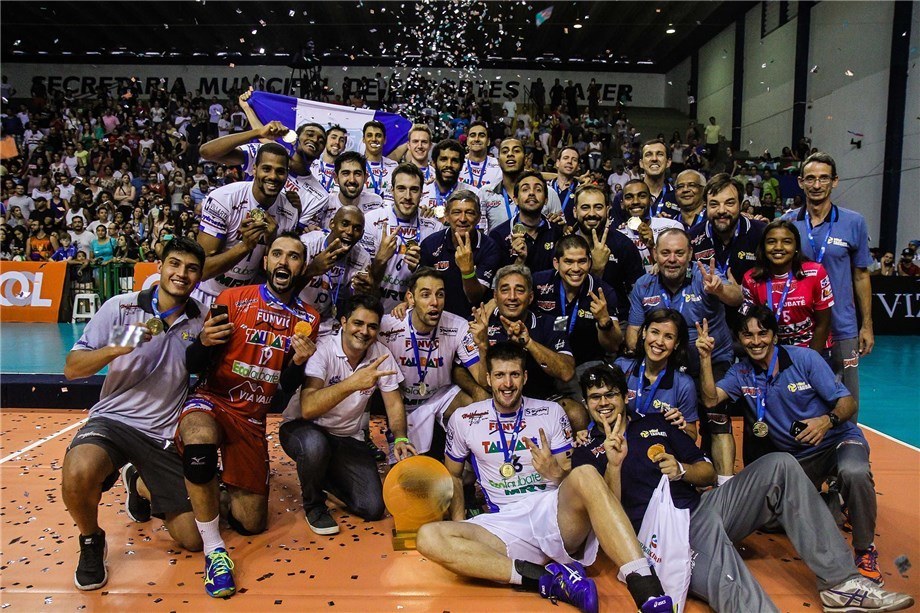 Last year's champions, EMS Funvic/Taubaté is eager for a chance at another title. Current Photo via FIVB 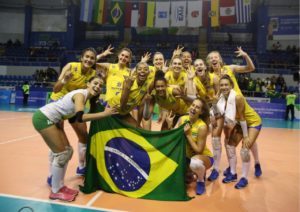 The São Paulo State Championship, or simply “Paulista,” started over the past week for both men and women’s teams. Although only done in a regional format, both tournaments will feature Superliga teams that are overflowing with talent, Olympic gold medalists included. They use these games much like a Superliga preseason, a perfect time to twist the team’s nuts and bolts for Superliga against lower tier division  teams composed mostly of college age athletes. This year, Volleymob will bring the action closer to you in a biweekly recap of all games played.

Both tournaments will be played in single round format, everybody pitted against everybody once, which will determine playoff order for the tournaments’ finals.

The men’s tournament will have the following teams:

The women’s tournament will have the following teams:

* Teams that are currently not in the Superliga

A home game for Pinheiros, they hit only occasional bumps, mainly service errors, in a way to a comfortable first set win. They fixed these minor mistakes and started the second set on an unheard of 10-0 lead, closing the set at 25/13. Three time Olympic gold medalist coach José Roberto Guimarães must had have really strong words for his Barueri team after such a shameful display, for they came back playing harder to win the third set behind national teamer Naiane’s fast play with her middle blockers. On the fourth set, just when it looked like things were going for a tiebreak, Bruna Honório took over the game and finished the set for Pinheiros.

Bruna Honório put on a big performance, scoring a whopping 27 points, to Barueri’s modest team high of 12 points from Suelle. This was certainly not the start of season that José Guimarães hoped for. Barueri should really start hoping for a Katarzyna Skowronska and Jaqueline’s commitment soon.

The men’s tournament had the following games:

8/9 – The tournament kicked off with São Francisco Sáude/Volei Ribeirão’s first game as an organization. The city of Ribeirão Preto so excitedly received the news that the city was going to have a volleyball team again after a long time, that the first 2,500 tickets that were put for sale for the first game were gone in just a few minutes.

The team is coached by Carlos Pacheco, who coached Sesi/SP to a state championship last year. Sesi/SP also happened to be the team’s first opponent at this year’s championship. The weird and ironic detail, though, is that Ribeirão Preto is presided by Olympic gold medalist Lipe, as a personal project of his, but who still plays professionally for, you guessed it, Sesi/SP.

On to the game, Sesi took advantage of Ribeirão Preto’s newcomer status and won easily by 3-0 (25/16, 25/14, 25/22). Ribeirão Preto is just too fragile at the moment, being such a new team, and according to its coach, must play “calmly, one set at a time.” Easy preys, then, for a team that has at its command Olympic gold medalists setter William “The Magician” Arjona and opposite hitter Lipe.

12/8 – Ribeirão Preto’s second game was also a defeat, this time at the hands of the defending champions EMS Funvic/Taubaté. Even without seven of its players, away on national team duties, but with Olympic Gold medalist Dante on uniform, Taubaté closed the game at 3-1 (27/25, 18/25, 25/18, 25/15). It is safe to say, though, that the packed gym at Ribeirão Preto was much more worried about partying then the possibility of a win.

Having a team composed mostly of players from the youth national teams, Santo André was able to score a win against Campinas, who boasts the play of the likes of Olympic silver medalist 7″ feet tall outside hitter Leandro Vissoto, who had 19 points.

The game started pretty evenly, with both teams winning a set at the beginning. Santo André just had more grit though, grinding out the last two sets on pure will, capitalizing on Vôlei Renata numerous mistakes. This game is an exciting example on why regional champioships are so much fun. Where else would such an underdog win be possible? Campinas is a legit Superliga team, yet they got beaten by a team who plays the equivalent of a third division league in Brazil.