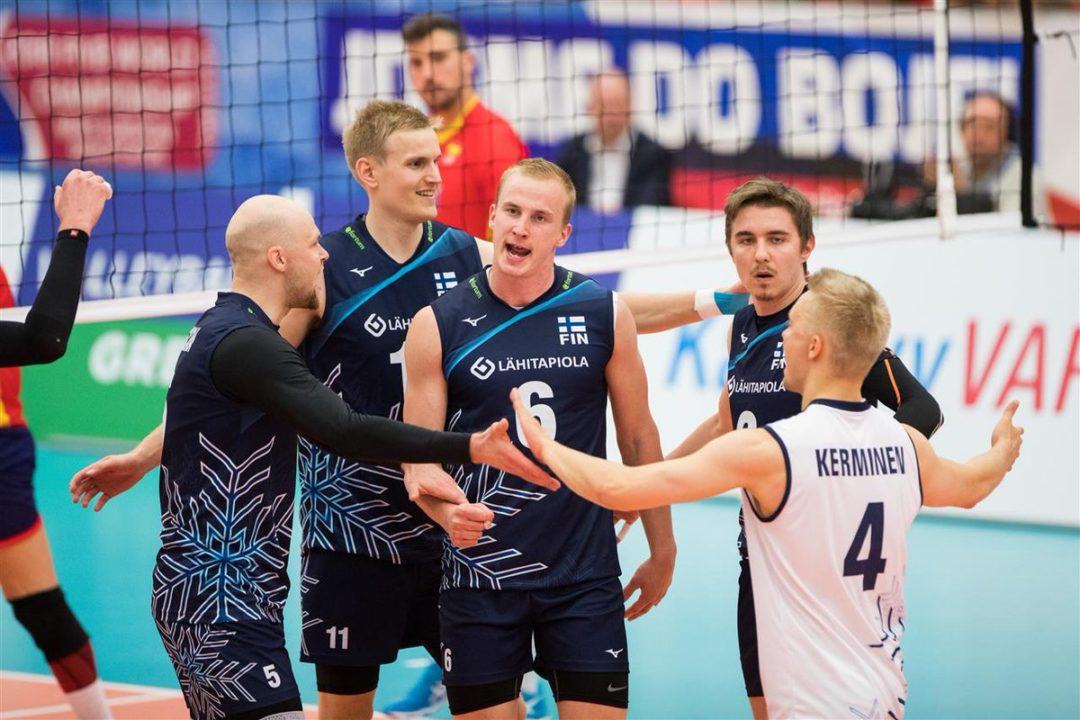 Finland needed to win just two sets over the Czech Republic to win the group, and despite stumbling in Set 3, finished the qualifying round with a four-set win. Current Photo via Finland Volleyball

Finland earned the final automatic berth from the European Qualifier pool play with a four-set win over the Czech Republic on Sunday. Meanwhile, Spain topped Northern Ireland in a sweep to sew up second place in the group and advance to the third round of qualification.

Sweden wrapped up its tournament with a five-set win over Cyprus.

Needing to win just two sets to sew up their spot in the World Championships, Finland celebrated as such after taking the first two stanzas, but the Czech Republic continued to put up a fight with second place on the line. The home side gave the crowd hope with a 25-23 Set 3 victory, but fell short of completing the comeback win.

“The game went exactly the way we planned – to take two sets and be sure that we will go to the World Championship,” Finnish captain Eemi Tervaportti said. “The home team was really great, and they have something I have never seen before.”

Finland outblocked the Czechs 12-6 and served up nine aces in the match.

“Well, we played an amazing tournament,” Finnish coach Tuomas Samelvuo said “The idea was to grow with each match, moment by moment and today we needed to leave everything we had on the court. We have really amazing players and they really enjoyed playing together. I think that it’s amazing to see how they played. Also, I have to thank the fans, they were really great. I’m very happy for them! We played a solid tournament… I can’t find any more words now.”

Michal Finger paced the Czech Republic with 11 points, including a match-high eight kills.

The Spaniards never trailed in the match, leading by as many as 10 in Set 1, four in Set 2 and 13 in the final stanza. Twenty-three Northern Ireland errors helped the Spanish cause in the win, including 12 in Set 2.

Spain then had to wait for the result of the Finland/Czech Republic match to see if they would finish second or third in the group.

“I think we played a good tournament,” Spanish team captain Jorge Fernandez Valcarcel said. “We lost only one game. Now we have to wait for the other match. I hope Finland will win. I think that we controlled the game from the beginning to the end. We played the way we wanted, so I’m happy with the result.”

Cyprus had a chance to grab its second win of qualifying, but could not finish off the sweep, leaving the door open for a game Swedish squad, which responded to take the final three sets 27-25, 25-21, 15-13 for the win.

“The end of the match is a little bit bitter for us because if you check the points scored, we have the very same number of points,” Cyprus coach Evangelos Koutouleas said. “But that’s volleyball, it’s a great sport. We had a chance to win 3-0, but we didn’t close the third set and that’s it. We have many positives to take from this tournament. There was always a great atmosphere and it was very supportive. We did not play that many games before the tournament so for us it was a big and good preparation for the Games of the Small States of Europe, which we will contest from tomorrow.”

Cyprus led Set 1 throughout and rallied from down four to steal away Set 2 27-25. Cyprus led 21-18 late in the third set after overcoming a six-point deficit early on, but could not close out the match, allowing Sweden to score nine of the final 13 points and grab the 27-25 win. Sweden carried the momentum into a pair of nearly wire to wire wins in the final two sets.

Both teams registered strong blocking performances with Sweden edging Cyprus 19-16 in the category. Sweden registered 8 aces, while allowing just five. The teams each scored 111 points in the match.